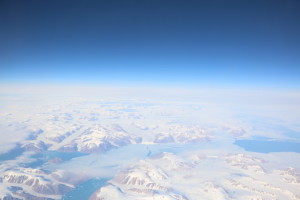 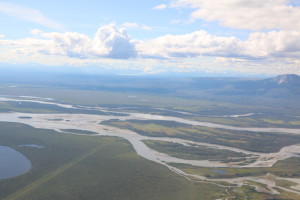 After god knows how many hours of constant daylight we arrived in Anchorage, Alaska. We left the airport in search of a taxi but jumped on the bus instead to save money. We were amused to discover that firstly the driver didn’t have any change and secondly he was surprised that we had luggage. I was tempted to point out that he was picking us up from the airport and people tend to have luggage with them but I thought better of it, not sure how sarcasm goes down here! Luckily a kind chap at the end of the bus changed a $20 note for me and we bundled the luggage on despite the driver not being too happy about it! We were kept company by a lovely but somewhat crazy lady and then discovered that the bus unfortunately finished it’s route over a mile away from the hostel, bugger! We reluctantly lugged all our stuff to the hostel, I resembled an overloaded donkey and was making similar noises while a wheel on Ed’s suitcase fell off so that got dragged most of the way. We got to the hostel only to be told that the rate on the internet was incorrect and it was going to be $88 instead of $67, which already was overpriced. I wasn’t having any of it so in my nicest best English accent I asked if he could honour the price “pretty please”, to which he thankfully obliged. 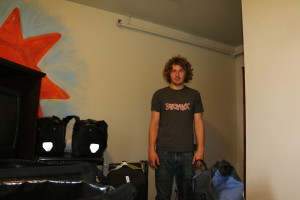 The following morning we woke up later than planned; standard behaviour. We’ve never been known to get moving very quickly or with any sense of urgency so it was no surprise that we got to customs in the afternoon. It was an hour wait for the bus so we jumped in a taxi in fear that if we left it any later we wouldn’t get the bikes or our tent out and have to fork out for another night in a hostel. The driver was a big ol’ jovial fella who had moved to Anchorage from Florida over 40 years ago. After listening to me and Ed chatting amongst ourselves he said ‘Y’all have a wonderful accent, I could listen to you all day!” It was really sweet but also funny because you don’t even realise you have an accent until someone points it out. After that I suddenly found myself talking ridiculously British which considering I normally have a bit of a cockney twang Ed found very amusing. “You’re talking all posh!”

We went and found the customs office and after about 25 minutes of mainly chatting about our trip, we had the papers to go and collect our crate. It was ridiculously easy, almost too easy! (Many thanks also to Motofreight for their brilliant work) Ed has had to endure many customs officials and border crossings and he said that was the easiest one by far and not to get used to it! They were so friendly and efficient it was refreshing. They pointed us in the direction of the Fed Ex building and off we went to get our beloved bikes. We got there at 3.15pm and were told sorry but that department closed at 3pm, noooooo!!! I pleaded with them and explained we would have to get a taxi back and pay for another hostel and they were really nice and friendly but said that the lady that deals with it is about to leave and isn’t in a very good mood! I asked if he could turn his charm on and try for us and he smiled and said “I’ll see what I can do”. About 10 minutes later he reappeared and said “meet me at the end of the car park and I’ll bring the crate out to you”, what a star! 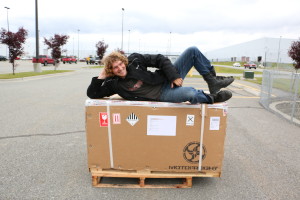 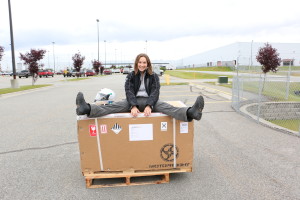 Excited to have the crate we cut the straps, unscrewed the screws and lifted the box off. At that exact moment it started to absolutely piss it down, and I mean REALLY piss it down! After 5 minutes we were soaked and realised that it wasn’t going to be stopping any time soon. We managed to build a shelter out of the box, the crate and some bubble wrap and continued to build the bikes under it. 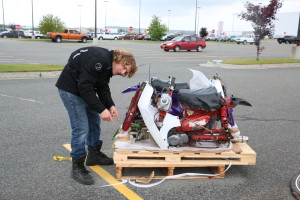 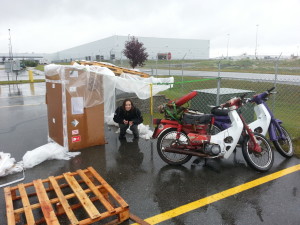 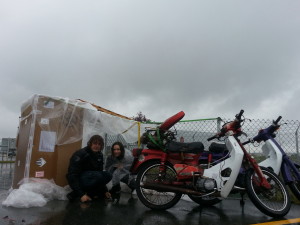 It was still damp and cold and we weren’t exactly motivated but it had to be done. After quite a few hours of funny looks from passers by (granted it did look like a tramp shack) we’d finally finished them. We went to kick them over but mine wouldn’t start, we then noticed that I didn’t have any fuel, the whole lot had been drained. Ed only had a little bit and we were aware we wouldn’t be going anywhere in a hurry. Luckily Tim from the Fed Ex building came past as he was leaving to see if we were OK and he pointed us to the nearest garage, it was only a mile away so we tidied up then Ed started pushing me down the road. We’d just stopped so Ed could rest his arm when a car came towards us flashing its lights, the window rolled down and it was Tim with a gallon of gas for us, legend! We only took what we needed to get us to the gas station and despite offers he wouldn’t take any money from us, he was just happy to help.

We got to the gas station and nearly made a faux pas. Turns out green is for diesel and black is for petrol, luckily someone told us before we made a rather annoying mistake! “How bizarre!” Ed exclaimed sounding ridiculously British which made me chuckle, then he pointed out that I was just as bad with my earlier comment of “Oh thank you ever so much that’s fantastic!”. I must admit it’s pretty cool having everyone love your accent, that never happens in England! We fuelled up and made our way to the House of Harley where quite a few people had told us they had free camping. We like free! On a tight budget a free campsite in a city is an absolute godsend. We arrived resembling drowned rats and were greeted by John from Atlanta who was also staying the night. 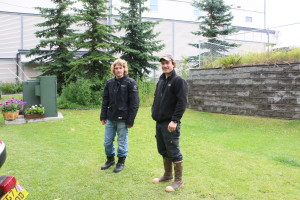 We set up the tent, had a shower (yep free shower too!) and went in search of food. We found a place called Village Inn and were sat down next to another couple but in a separate booth. Me and Ed were chatting and next thing the guy asks “How do you like Alaska?!” We said we’d only just arrived and got chatting about our trip. They were on holiday from Seattle and loved Alaska. Throughout the meal he kept turning round and chatting to us, I kept feeling sorry for his partner as she was getting a bit left out but she was lovely and seemed happy to let him keep chatting to us. As they got up to leave he came up to our table, picked up our bill and said “Hope you have a brilliant time, welcome to Alaska!” And that was that, a complete stranger paid for our meal, we couldn’t believe it. We were massively thankful and gave our details so they could follow us. Their names were Colleen and Jack and if they happen to read this I would just like to say – Thank you so much again, you’re amazing!

23 thoughts on “Welcome to Alaska!”