So it was an interesting start to my trip to say the least! After saying goodbye to Ken and Marolyn, which felt like saying goodbye to family, I finally hit the road. I’d made the mistake of thinking that it was going to be a boring ride to Crescent City, as the day ended up being full of surprises. 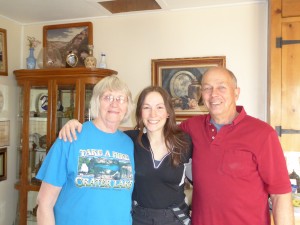 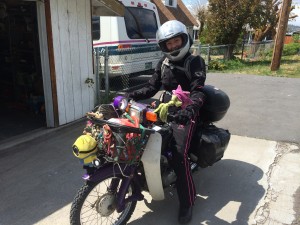 Expecting sunshine I was first surprised when it started raining as I rode through the forest, but after seeing what a soaking Ed had got when he rode to the coast, I actually got away rather lightly. It was a good opportunity to test my new Rukka Suki suit at least, which thankfully kept me comfortable and dry. 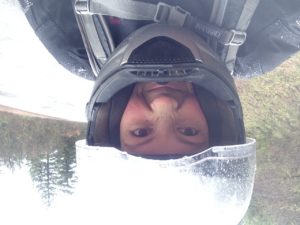 I was secondly surprised by the scenery, as relatively dull forest eventually gave way to the most beautiful lush green valley. 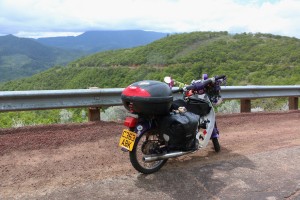 The sun came out just in time to enjoy the bends (as much as is possible on a slightly buggered C90 with shot front suspension), and the scenery continued to be pretty and green for the most part until I reached the Grants Pass area.

After leaving the congestion of the city, and stopping to refuel and have a quick snack of crisp-breads and peanut butter, I continued down the 199, destined for the world renowned Redwoods.

I’d been flat out since leaving Klamath Falls and had really been eating up the miles, but with a top speed of 50mph I still had to keep pulling over to let traffic past. It was in a beautiful narrower twisty section that I discovered how annoying it is to get stuck behind a slower vehicle like me, as I got stuck behind a massive RV. Thankfully he pulled over just in time for me to enjoy the last couple of miles and bends, but I soon had to pull over again as I could hear a strange noise. There was a weird metal rattling sound coming from the bike, but I couldn’t locate where it was coming from. When I was riding I thought that it might be the chain, but once I’d stopped moving the noise was still there. I still decided to check out the chain, and was rather surprised to discover that the nuts that hold my chain adjusters on had vibrated off completely, which was very strange. The chain was also a little slack, but still OK to continue riding, so I moved my awareness to the engine. I tried to listen to where the rattling was coming from but I couldn’t pin point it, so thinking that there was nothing I could do there I continued on my way.

It was literally less than a minute after I’d set off again that I got my biggest surprise of the day so far, as my back wheel suddenly locked up, causing the bike to fishtail and throw me from side to side. It showed how far I’d come with my riding, as my body automatically did what it needed to do to keep me on the bike and upright, and I steered towards the verge so at least if I did crash it wasn’t on the road or under another vehicles wheels. More confused than shocked I got off the bike to see what the hell had happened, but there was nothing obvious, at least not until I tried to kick her over. The kickstart was stuck solid and in gear the bike wouldn’t roll backwards, which it should do in every gear as it has a one way clutch. I instantly thought that my gear box had finally given up the ghost as it’s been unhappy for a while, but uncertain as to what to do I pushed it to a store a quarter of a mile away and rang the man who I was almost certain would know the answer.

With Ed on Skype we went though various tests, but even he was flummoxed. It didn’t make sense, even to Mr C90 himself, but one thing we did know was that it was almost certainly terminal, however I needed to take it apart to be sure. Looking to find a hidden place away from friendly but quizzical locals, a couple turned up on a 900 Triumph Scrambler and came over to see if I needed help. They were called Sam and Keri and were originally from Michigan, but had been living in Gasquet for just over a year and had a house and tools that I was welcome to use. Before I knew it Sam was back with his truck and gave me and the bike a lift to his house, where we worked in to the night trying to locate the problem. Every time we removed another part of the engine we thought we’d found the problem, only to discover that it was fine and we still had no idea what had gone wrong. 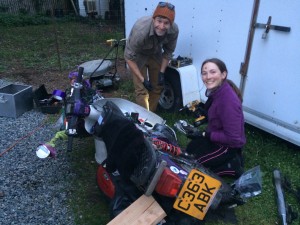 After dinner and a good nights sleep, we resumed in the morning guided by Ed over Skype, determined to find out what was wrong. It was after removing the clutch that we finally had the answers. It turned out that my big end had gone, which had caused metal filings to get in to the engine, which in turn had blocked the oil way to a gear on a shaft that went in to the clutch, seizing it on to the shaft and permanently engaging the clutch. And voilà, one dead engine!

It was good to know what had gone wrong, and I’d learnt a lot in the process, plus it had been great to meet Sam and Keri. It turned out that they’d been on their own adventure. They first rode through Central America two up on a bike similar to what they have now, but having had that trip cut short due to issues with the bike, they set out on a second trip with the plan to go all the way to Argentina, but on the first day Keri had a very serious accident, breaking multiple bones and doing a lot of damage. She’s still recovering now and needs to get the strength back in her arms to be able to ride again, and had literally just sold her bike as she felt she wouldn’t be riding again any time soon. My timing couldn’t have been worse, or better, depending how you look on it! They’d basically decided to settle down, get a mortgage, a dog, the whole nine yards, but then I turned up doing exactly what they wanted to do and threw a big old spanner, or wrench I should say, in the works! I’d got their brains going and back to dreaming about adventure, so I hope me turning up has given them the inspiration they need to not give up and one day live their dream of riding all the way to Argentina. I’m not sure where they’re going to put their big dog though! Sidecar outfit perhaps?! Where there’s a will there’s a way…

With a dead engine it was time to decide what to do, and after lots of deliberating and coming up with all possible solutions, we decided that the best plan of action was to get me and the bike down to LA where Ed was staying, and order a new engine to arrive there. This plan only came about due to the incredible generosity of Ken in Klamath Falls, who I’d spoken to the day before. I’d told him that I was having problems and he called back to say that not only was he willing to come and pick me up and drive me back to Klamath Falls, but he was also willing to pick me up and drive me all the way to LA!! And just so you know how amazing that was of him, it’s a nearly 2000 mile round trip! It was unbelievably kind and generous of him, but I felt bad taking him up on the offer, as it was too much to ask from him. Thankfully though Sam and Keri stepped in, with Ed quickly filling in the missing part of the puzzle, and a few calls later a rescue plan was hatched and put in action! 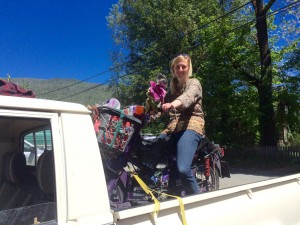 With my broken bike on the back of Sam’s truck, Sam and Keri very kindly drove me nearly 100 miles back to Medford, Oregon, where the lovely Ken was waiting for me. 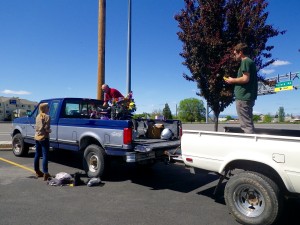 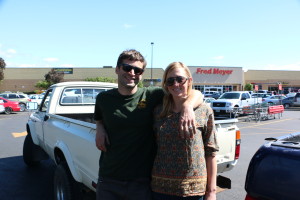 Happily passed over to my American Dad, (I joked that I was quickly becoming the daughter he never had) Ken then drove me over 450 miles to south Sacramento, where he waited with me until Ed turned up in a van he’d borrowed from the guy he’d been staying with. 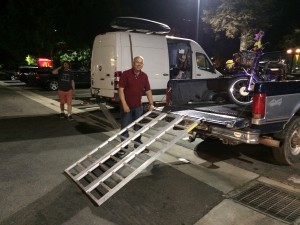 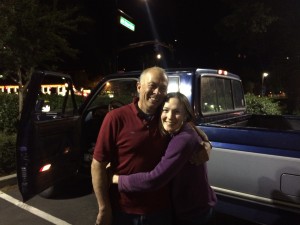 I couldn’t thank everyone enough for their kindness, time and generosity, especially as neither Sam nor Ken would take any money for fuel. Their selfless acts of kindness were another reminder that the world is generally a good place full of wonderful people, and I’m lucky enough to be able to call some of those wonderful people my friends. (and boyfriend!)

May 2, 2016
USA No comments Rachel
← Leaving on a jet plane, don’t know when I’ll be back again! California Road Tripping →