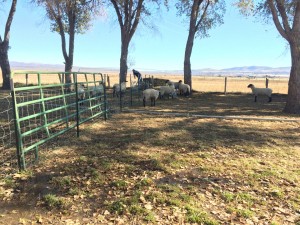 We ended up spending all morning and part of the afternoon with Lee. He was good company, and kindly cooked us breakfast while Ed got to play with his guns out of the kitchen window, before heading outside to do some clay pigeon shooting. 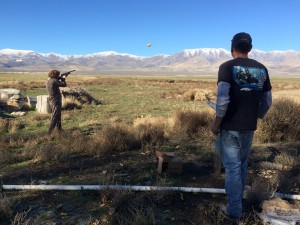 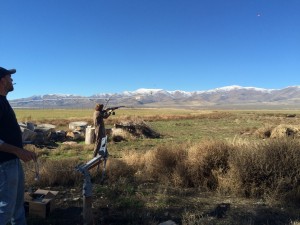 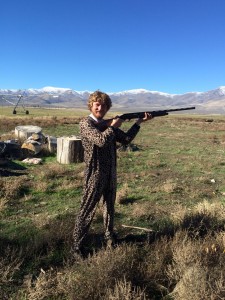 We also got to do some work on the bikes. Lee was a biker himself, and had several dirt bikes, along with a multitude of jet skis, boats and quad bikes. We cleaned out our air filters which was a job long overdue, and I hoped that my bike would run a little better now that it could get enough air. 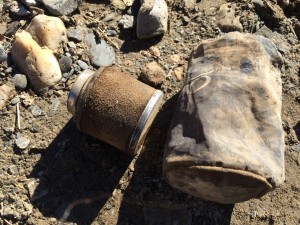 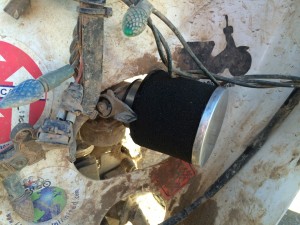 We found another battery so I could finally have a decent light, replaced a spoke on my front wheel that we noticed had broken, and also replaced a missing nut on Ed’s suspension. Finally we adjusted our chains before Lee adjusted me (in the chiropractic sense) and we were finally ready to leave around 2pm. 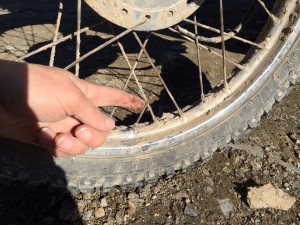 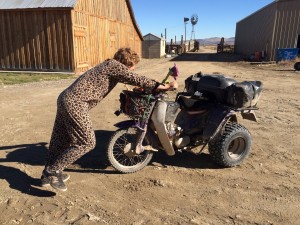 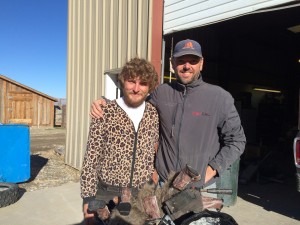 We got the feeling that Lee didn’t want us to leave, I think he wanted the company. I imagined it could be quite lonely living on your own in a town with a population of 40; there wasn’t exactly much chance of meeting anyone new, at least not outside of the tourist season. We needed to get going though, while the weather was on our side, although part of me felt that we should have stayed and left the following morning.

Sam’s route took us over a pass, but Lee told us that it would be feet deep in snow now and impassable, so we decided to take the ‘easy’ route. It started off with really easy fast gravel roads, but I knew it was too good to be true. 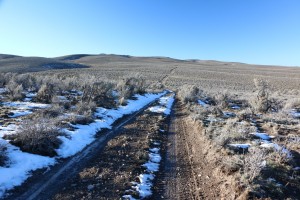 We turned off on to a wet muddy trail, that took us over and through rolling hills, that spread out as far as the horizon, gently climbing higher. The trail was at least 50% water and Ed struggled to stay in a straight line, slithering and snaking all over the place. 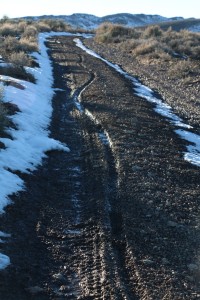 The view was incredible as we got to the top of one hill, but looking at where the trail went next, we knew we had our work cut out for us. 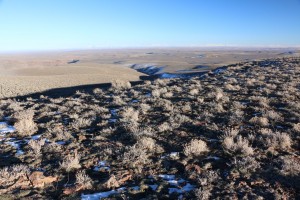 It was really snowy in places where the sun hadn’t got to, slushy in others, and wet and slick where the snow and slush had melted. Once again I was fortunate that I had three tyres, but I still found myself slipping and sliding sideways, unable to keep traction. 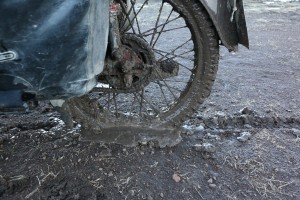 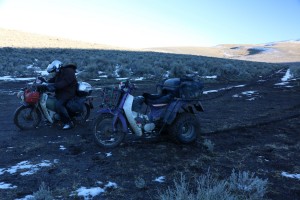 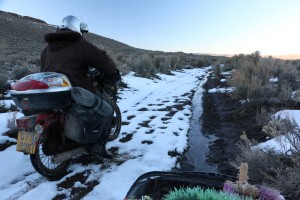 The light started to drop as we wound our way round the hills, and I struggled to navigate down a deep vertical wash, while Ed continued battling through the mud further up the trail. 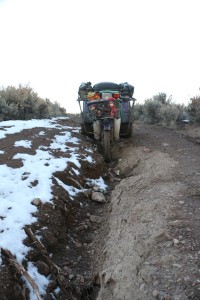 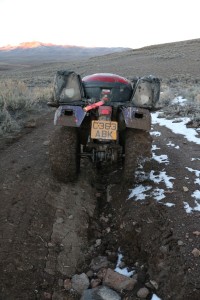 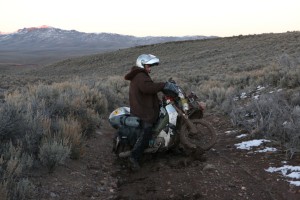 It was obvious that both vehicles had their strengths and weaknesses. While Ed’s bike was nimble and could get through smaller spaces, mine had better traction and didn’t slide around as much, and when it did it was easier to control. I guess we both had our own separate battles on the mixed terrain that day.

As the light started dropping, deep pastel colours filled the sky, and while I admired their beauty, I was very aware that they signalled the imminent arrival of darkness. 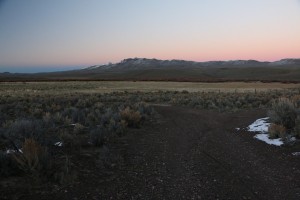 Under the cloak of a dark starry night, the mountains and hills seemed never ending to me. Just when you thought you were finally coming up and out, there would be more peaks and hills, in every direction. I didn’t know that you could get claustrophobic in a wide open space, but the never ending feeling of being surrounded by hills and mountains, along with the ever increasing darkness, shit headlight and slippery terrain, made me feel claustrophobic. I couldn’t wait to get out of the mountains and on to flat open land. I guess looking back I couldn’t wait to be somewhere where I felt safe, warm and secure.

After what seemed like forever we finally started coming down some snowy switchbacks, and although this meant that we were getting down on to flat land, I didn’t feel any better. In fact I felt worse, as it was dark and my light started to fail intermittently as I made my way down, and with my not so good night vision I struggled to see properly.

It was down one of these switchbacks, stiff and lacking confidence, that I found myself suddenly bursting out laughing at the absurdity of it all. ‘Why the hell are we doing this to ourselves?!’ I said out loud to myself. ‘It’s not fun, it’s not enjoyable, what are we doing?!’ This sudden burst of laughter loosened me up a bit, and although still riding slowly and cautiously, I finally made my way down the last few switchbacks and on to the home straight.

Ed was down there waiting for me and although I thought that he might be annoyed that I was taking so long, I’d thought up enough excuses on the way down to defend myself. Firstly his eyesight is better than mine, plus he has a fully functioning headlight. Well I say fully functioning, a lot of the light bounces back off his fuel can in to his eyes. He also doesn’t seem to get fear like I do. He’s more capable, and can brake and steer at the same time, something I seem unable to do unless a fluffy thing jumps out in front of me.

I was so pleased to see the lights from some sort of civilisation, but it took ages to get to them. We had to ride for about 15 miles in a completely straight line, which wasn’t easy on a homemade trike that only wanted to go right. We discovered that most of the lights were from an Indian reservation, and the rest were from the town of McDermitt. It was really cold, but we managed to find a cheap motel for $40, where we filled our pockets full of free sweets left over from Halloween, before going to the casino for some food.

It was then that I told Ed about my sudden laughter outburst, questioning what the hell we were doing, and he laughed and said that he’d been thinking along the same lines. The funny thing was we both knew what the answer was. We’d set out to do something and we were going to finish it, even if it meant putting ourselves through hell at times. We like to think of it as rebellious defiance, but I’m well aware that others would call it stupidity.