McDermitt, NV to Fields, OR 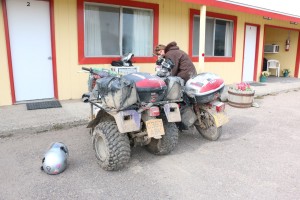 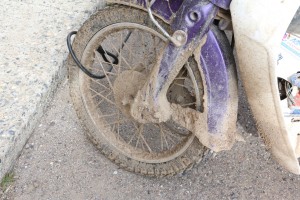 After breakfast in the casino, we finally crossed the border in to Oregon. This was a particular milestone for us, as apart from a little dip back in to Nevada and California, it was the last state that the TAT finished in. Finally the end seemed in sight! 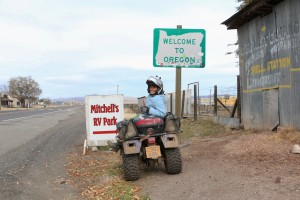 After riding out of town and past a random assortment of dead things and other junk (I’m aware that one man’s junk is another ones treasure, but to me it was junk) we turned on to a graded gravel road that took us over green and brown rolling hills. 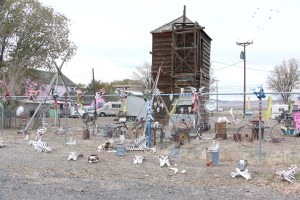 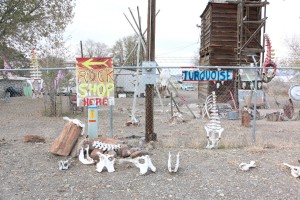 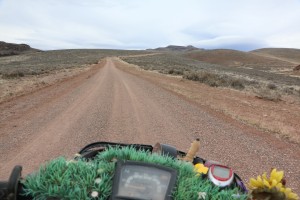 For me it was the bleakest and most barren scenery of the TAT so far, not helped by the fact that it was grey and overcast without a hint of sunshine. It probably would have looked completely different had the sun been shining, a bit like Nevada, but today it just looked dull. The view opened out, revealing more hills covered in shrubs and bushes, and snow capped mountains rested behind them, like they’d been painted on. 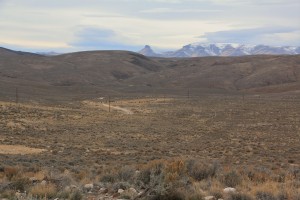 The trail was corrugated gravel, which made cornering particularly difficult for me. The trike’s back tyres would skip over all of the tit jiggling corrugations, making for a bumpy ride, and the front tyre would lose traction all together. Ed was quite far up ahead, but I could still see him, like an ant, following the trail across the huge expanse of land as far as the eye could see. 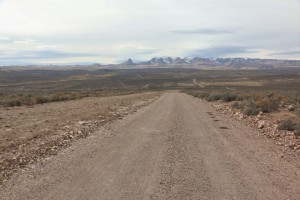 We turned off on to a narrower dirt trail, which became really rocky, and was a particular pain for me on the trike. Ed could just nip in between the rocks, but any route I picked was bumpy as hell. The rocks then disappeared, and we climbed up a hill as the colours changed from green to yellow. It was actually quite pretty up there, as the soft yellow contrasted beautifully with the varying shades of grey in the sky. 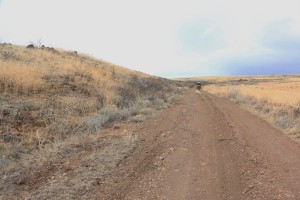 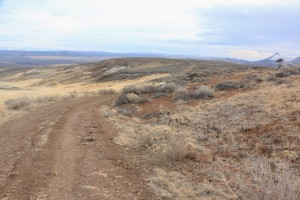 The next section after that was completely riddled with rocks, and even worse than the previous section. I couldn’t go very fast at all; if I did I was flung from one direction to another. Rocks were quickly rising up to the top of the list of terrain that I hated riding on the trike, along with bastard bushes and deep vertical washes. Sand, mud and gravel on the other hand; no problem. 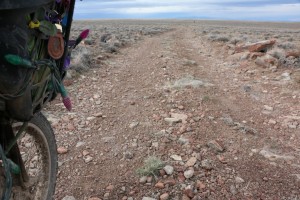 However it wasn’t on the rocky section that I managed to have my first proper ‘off’. The trail had turned to dirt with grass in the middle, but there were small and apparently inviting banks and gullies along the side. Ed had said that I needed to learn to brake when something goes wrong, so as I hit a rock at the wrong angle, I went up one of the banks, remembering to brake but completely forgetting to steer, causing the trike to tip over on to its side. It wasn’t particularly high speed but it happened quickly, and I only got flung a short distance. I was up as quickly as I’d gone down, and took my place upon the trike to strike my hero/look what I did pose. 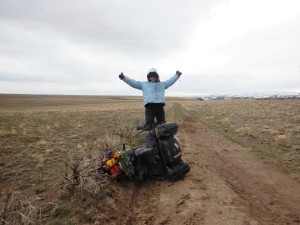 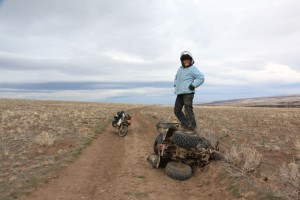 As always Ed was particularly amused by my lack of being able to multi-task, and after taking a few photos and laughing at me, he picked up the trike and we were off on our way again.

We continued on, with more rocks and hills, before the scenery seemed to change completely. So far we’d just been surrounded by scrubland, with a bit of grass appearing here and there, but now we were surrounded by rocky hills and outcrops. 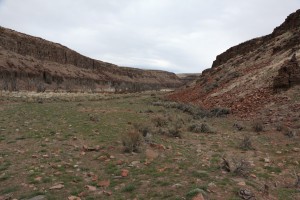 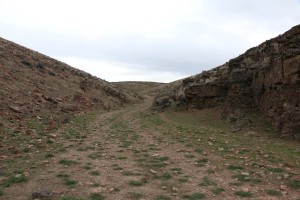 We had a short but steep rocky climb, and found ourselves surrounded by what I would describe as tableland mountains, with grass on the ground and finally the appearance of trees. 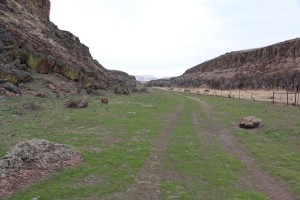 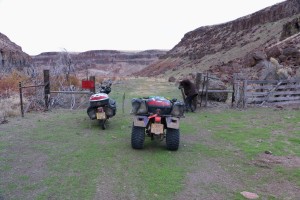 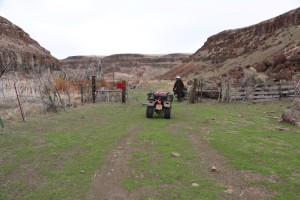 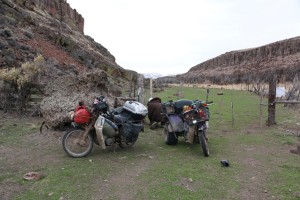 We made our way through a gate, but just round the corner I managed to come off again. This time I took the wrong line and the trike just tipped, but so slowly that I just stepped off it and laughed. Ed came back and picked it up for me, bemused by how I could have possible come off on such easy terrain. I believe my excuse was ‘It’s where the trike wanted to go’. 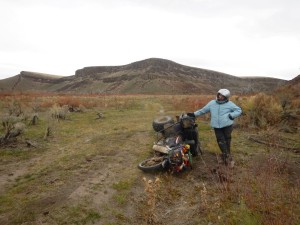 The trail turned to gravel and the mountains and hills moved further away, leaving space for open pastures. We rode past cows that either scarpered up a particularly steep hill, or ran in front of us, unable to work out that all they needed to do was stop on the verge or run sideways. 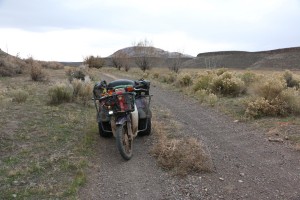 We eventually got to a proper gate, with a proper lock, and couldn’t believe our joy at not having to deal with crap barbed wire. Our joy was short lived though, as we discovered that it was an annoying crap lock. We only just managed to wrestle it open, and got on to a wide open gravel road surrounded by scrubland. 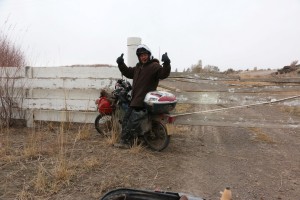 It hadn’t been that cold all day, but then the weather suddenly turned and the temperature plummeted. It started to snow, and became incredibly windy, reducing visibility. 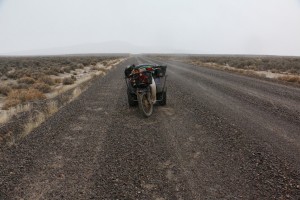 It was just a case of head against the clocks, with my glove constantly meeting my visor to clear the snow so that I could see. I knew it would probably scratch it but I didn’t have a choice. 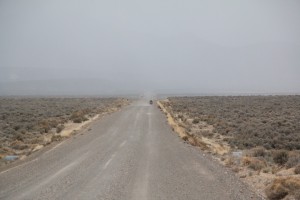 The wind became ridiculous, and a head wind soon saw me doing about 20mph; I literally couldn’t do anymore. The miles dragged on, and I hoped that when I got to the end of the road and turned the corner that it would ease off, but it got worse. A side wind now battered me from the left, and I struggled to keep the bike going in a straight line. The trike always wants to go right anyway, so add a strong side wind from the left and it’s even harder work. I had to use all my strength to keep it in a straight line, and couldn’t wait to get to Fields.

We finally arrived in Fields as the light started dropping and the wind got stronger; it was good timing. 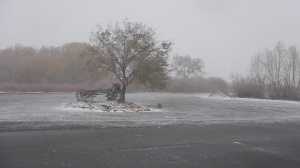 We spotted the remnants of an incredibly recent fire as we rode to Fields Station, where the restaurant and motel was. The black ground smoldered and we hoped that it wasn’t the motel that had burnt down! (We later changed our minds on that, but I’ll go in to that a bit later)

We’d booked a room in advance in the morning and pre-ordered some burgers, fries, and milkshakes, which the lady said she would leave in our room as we had expected to get there after 4pm when the kitchen had closed. We arrived before they closed and looking forward to something hot after being in blizzard conditions, we were disappointed when we were told that they hadn’t been able to make our burgers and fries, as the chef had been out earlier helping fight the fire. We kind of understood this, but at the same time wondered why one of the two women stood before us couldn’t have fired up the grill and made the burgers, especially as they’d been pre-ordered that morning.

Instead they’d taken it upon themselves to make us some overpriced ham sandwiches, along with a freezing cold milkshake, which had to be eaten with a spoon; basically ice cream. Ed didn’t seem enthralled by a ham sandwich or freezing cold beverage, so decided to find something else to heat up in the room. He found a macaroni and cheese ready meal, but as he went to pay for it we discovered that there wasn’t a microwave in the room. They didn’t even think to offer to heat it up for us, they just said that there wasn’t a microwave in the room and that was it. It was me that had to ask if they had a microwave in their kitchen to heat it up for him, which they did. It then dawned on us that they’d offered to make us hot food and leave it in our room as they’d be closed, but with no way of heating it up we would have arrived to cold burgers and cold fries! How stupid.

Another guest was in there, unimpressed that he was unable to get something hot to eat. He’d been told over the phone that it closed at 5pm, but they’d neglected to tell him that the kitchen closed at 4pm. He then asked if there was Wi-Fi, to which he was told no. TV? No. He was then advised to read a book. Ed made a passing comment that it was the most expensive accommodation for the least amount of facilities, which it was, then the guy started telling Ed about some great and cheap accommodation that he’d stayed in about 40 miles up the road the night before.

We soon retired to the room, which was freezing as the heaters hadn’t been turned on yet. With no TV and no enthusiasm for doing anything else, we watched a film on the laptop while eating our food and ice-cream. The heaters finally kicked in so we could hang our stuff up to dry, but still chilly from the ice-cream I made some coffee in the coffee maker to help warm us up. It was then that I noticed a big damp patch on the floor in front of it, and thinking that the floorboards must be leaking with the bad weather, I made a mental note to mention it in the morning when they re-opened and thought nothing more of it.