Klamath Falls, OR to Port Orford, OR

A week after arriving at Ken and Marolyn’s it was time to finish what we’d started, and complete the TAT. Ed’s new sprocket was on, his stripped axle was replaced with my old axle which had been sent to Ken’s back when we were in Moab, and we replaced his sorry looking rear inner tube with a new one. 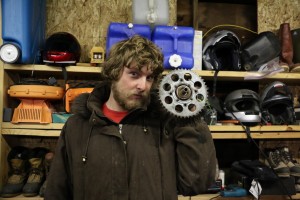 We needed to ride a long paved road to pick up the trail again, but after a recent heavy dumping of snow it was just too dangerous to ride. Had we both had motorcycles with studded tyres then we would have been fine and done it without hesitation, but with a home-made trike and a motorcycle with rapidly balding tyres, it really wasn’t a good idea. Thankfully for us though it wasn’t game over, as Ken stepped up to the plate and kindly lent us an old ambulance, with the plan to ride to a town around 120 miles away. This way we could avoid the dangerous road riding, pick up the trail from there, and not miss out on too much of it. In fact with our detour to Klamath Falls and our drive to Glendale, we would only miss a day and a bit of the trail, something that we weren’t too upset about.

Having loaded the bike and trike on to the truck the night before, it was just a case of get up early, clear the ice off the windscreen, drive 120 miles to Glendale, then unload the bikes and ride the rest of the way to Port Orford. 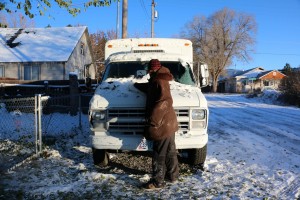 Shortly after setting off I was pleased we’d chosen to take the truck, as the road was incredibly icy and slippery in places. It was freezing cold too, so I was also particularly thankful for the unlimited heat out of the vents. 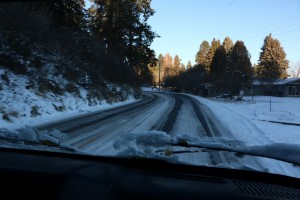 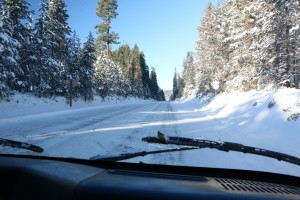 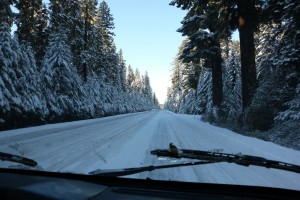 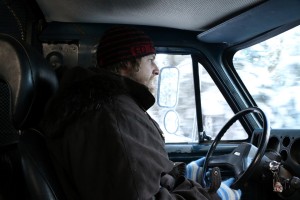 We arrived in Glendale around 11am, but as it was a public holiday the gas station was closed. This meant that we had to drive back five miles in the truck to get some on the main road, which wasn’t that far but a setback that we could have done without, seeing as time was ticking on. We then discovered that we’d forgotten to get a travel socket to keep the iPhone charged for our navigation, having left ours at Ken’s, but after finding that they didn’t have any in the store the owner kindly gave us his and also let us leave the truck in the car park. So with power in the phone and fuel in the tanks, we headed off on what was to be our last day on the trail, kind of. 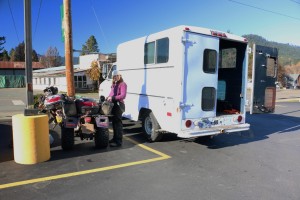 It was 12pm when we finally left Glendale, with a warm sun and bright blue sky. We couldn’t have asked for better weather really, especially as it was winter, and it provided us with a positive feeling that we might actually get to Port Orford in one piece.

As time was getting on we decided to take an easier option out of town, which consisted of smooth paved roads. This wasn’t necessarily easier for me however, as it was quite twisty and the trike wasn’t much liking bends these days, left or right. We stopped shortly after setting off as Ed thought he had yet another flat tyre, but thankfully it just needed some more air put in it and we were quickly on our way again. 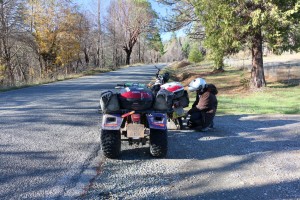 We eventually turned off the main road, rejoined the TAT, and wound down in to the forest where the sun was replaced by shade. 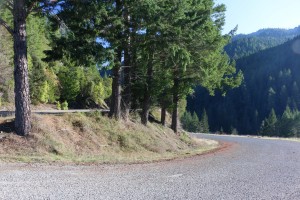 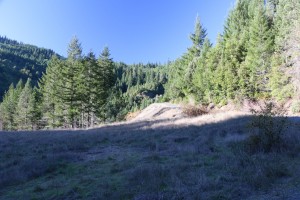 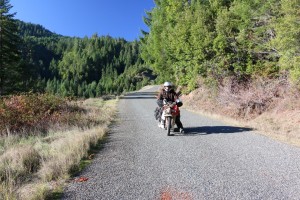 Snow appeared on the trees like they’d been dusted with icing sugar, and worked its way down until there was a thin layer over the road. 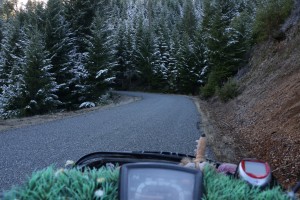 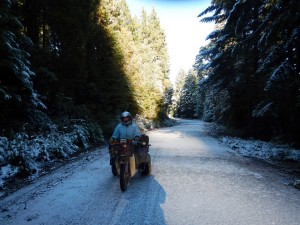 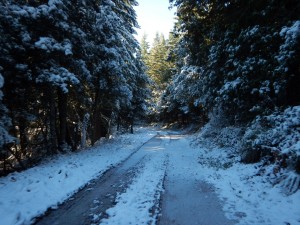 Surrounded by forest we continued on the trail, gently climbing higher with every mile and turn. Time drifted by as we continued, our progress only shown by the dot on the iPhone map, and the occasional exciting words written on the odd paved section in white paint saying ‘Oregon Coast’.

As we climbed higher, beautiful views were presented in between the trees, with the snow getting a little thicker, and the trail getting narrower and winding. 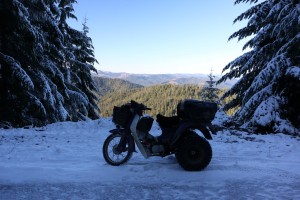 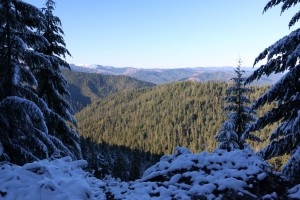 The trail then made its way down again, leaving the snow behind. The forest was really beautiful, especially as sunlight streamed in between the trees. 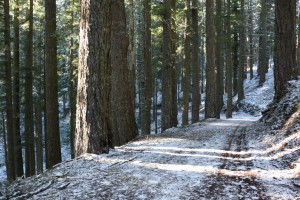 At one point I got excited as we got to a sign that said ‘Oregon Coast’, but the excitement was short-lived as I knew that we still had a way to go. 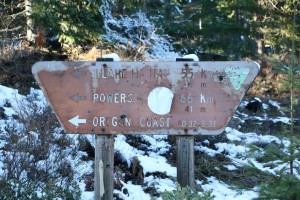 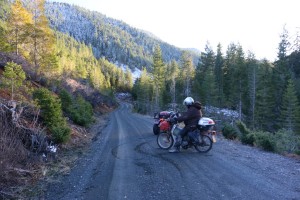 Despite wishful thinking that we’d left the snow behind for good, it soon appeared again as we climbed up in elevation. We went past quite a lot of logging operations but there wasn’t a worker in sight being a public holiday, so we continued to have the place to ourselves. 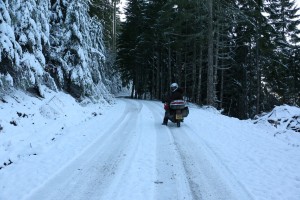 The trail headed down once again, and the white snow was replaced with welcome green vegetation. I made sure that I enjoyed it while it lasted, as I had a sneaking suspicion that there was more snow to come. 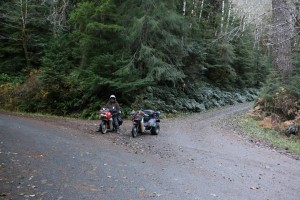 As the light started dropping we started climbing, just in time to see a beautiful view as the sun set. It was such a perfectly clear sky, with those lovely dark pastel colours that you get at that time of day. 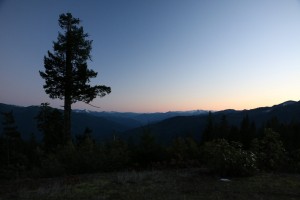 It started getting quite cold once the sun set, and I was surprised as we started climbing up even higher. I’d stupidly negated the fact that there were mountains in between where we’d started and where we wanted to get to, so it shouldn’t have really come as a surprise that we had another mountain pass to do. The snow got deeper and the sky got darker, and my feet were freezing as they’d got wet from the snow. Fortunately my hands were OK as we’d fixed my heated grips in Klamath, although I was left wondering why the hell we hadn’t fixed them sooner! I think on long trips, broken things that don’t actually stop you moving just become part of the furniture and you forget about them. You only remember to fix them when you need them, and instantly forget the second you don’t.

With cold feet and a chilled body, the trail and miles seemed to be going on forever, and I couldn’t wait to get to Port Orford. Daydreaming about warm motels had become a common fixture of my last month or so on the TAT, and today was certainly no exception. Just as I was thinking how lovely a warm bed would be, and how we should probably be going down in elevation soon, I went to change gear as we got to a slippery snowy hill and heard a sudden loud crunching noise. My heart sank. I tried to use my gears but they wouldn’t engage, instantly leading me to think that my gear box had broken. I tried a few more times then realised that it could be something else, so got off and looked under the bike, where I discovered that my chain had snapped.

I honestly couldn’t believe it at first, then laughed at myself for not expecting it. Looking at our track record on the TAT of course I should have believed it, it wouldn’t be right to have our last day on the trail mechanical failure or obstacle free, would it? Why break the habit of a lifetime?! I’d already decided by this point that our bikes were self aware, perfectly reflecting our mental exhaustion, but not holding it together quite as well as we were, literally. 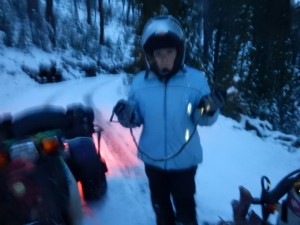 Having been riding in front of me, Ed rode back round the corner to find me standing there with the broken chain in my hands. For me it couldn’t have been worse timing, as my lovely daydream of being in a warm motel within half an hour was replaced with the real life nightmare of standing looking at a patch of wet snow to see if we could fit the tent on it for the night.

Thankfully though I had the realistic and resourceful Ed with me, who had much better ideas. If he couldn’t fix my chain then he could certainly tow me, which might take ages but it was a hell of a lot more appealing than cold wet camping in the snow.

We didn’t think we had the parts, but luckily Ed had a spare split link from another chain and managed to repair it by driving out the broken riveted link using rocks and screwdrivers. I was so relieved once he’d done it, and after marching up and down to try to warm my feet up which had started to resemble blocks of ice, we finally got moving again. 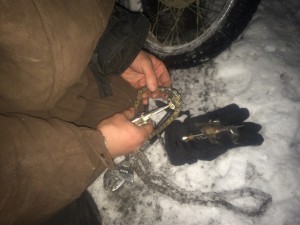 If Ed fixing my chain hadn’t been enough of a joyous occasion, I was even more delighted to discover that we were nearly at the top of the pass, and that it was downhill from there; thankfully only in the literal sense.

It was quite narrow and winding through the forest, but as we dropped elevation the snow disappeared, unveiling numerous potholes and lumps and bumps that sent me flying. I ended up riding quite slow in the end, but was just pleased to be making any progress at all. Apart from us we only saw one other vehicle on the trail, the occupants of which gave us a slightly confused wave as we wobbled on by.

We eventually got to the end of the trail and on to a paved road, which took us in to Port Orford. Under normal circumstances it should have been an exciting occasion, but after travelling for so long and being late and dark, you couldn’t actually tell that we were next to the ocean, so we decided to mark our arrival properly in the morning. For now all we felt was tired and hungry, and as all the restaurants were closed we had to settle for gas station food. We inhaled a microwave ready meal, rewarded ourselves with a snickers, then passed out on the motel bed, mentally and physically exhausted. I have to be honest that it wasn’t quite what I’d envisaged the last day to be when we’d set off on that first day in Tennessee, over three months ago, but the main thing was we’d made it, and that’s all that mattered.