We didn’t get to bed until 2am so had a late start to the day, and after stocking up on yet more oil for my thirsty bike, we found an auto shop and they let us give the bikes a once over. 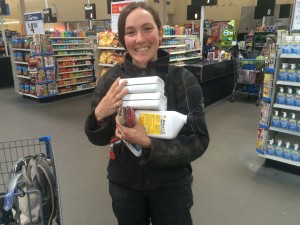 Mine was in desperate need for an oil change, and we also cleaned our air filters and cleaned and oiled our chains; they’re dry and dusty within hours but at least we’d made the effort! 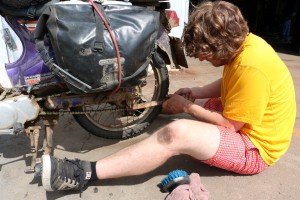 We finally got on to the trail around 4.30pm, but before we knew it my bike was playing up. It had been running like a dog all the while we’d been riding around town, and a few miles from Mountainburg it decided to die. It was behaving like the main jet was blocked, but not wanting to take the carb apart we just ran the fuel pipe until it was clean, hoping that any crap that was in there had made it’s escape. It seemed to do the trick but after carrying on a short distance it died again, forcing us to clean out the carb. Normally it’s a quick and easy procedure, but as I have a box bolted on to the leg shields in the step through, it’s a fair bit of hassle and something we try to avoid. It was then that we had the bright idea to melt some holes in to my leg shields to get the tools in, using a tent peg and our petrol stove. 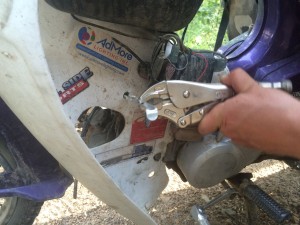 It was quite hard to work out exactly where to put the holes, but after a fair bit of stabbing with a hot peg, and some sawing with a hacksaw, we finally made a hole big enough to get the tools in without having to take the box and leg shields off. 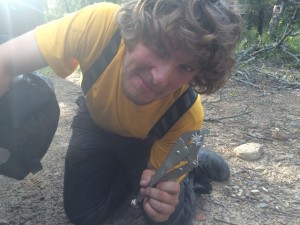 The main jet was clear but we discovered that the pilot jet was blocked, which would explain the flat spot that Ed and then I (after he’d given the carb and problem to me) had been experiencing for quite some time. This further work seemed to do the trick, but then further up the road the bike decided to die again. Needless to say that I was getting a bit annoyed by this point. It definitely sounded like the main jet was blocked, and Ed suspected fuel starvation, but after further investigations we discovered that it was actually the spark plug. It was completely covered in carbon and looked exactly how a speak plug SHOULDN’T look. We were actually surprised that it had been firing at all to be honest! 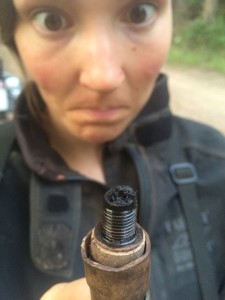 Ed put a different one in and it ran so much better. It wasn’t quite ‘good as new’ due to the plumes of smoke bellowing out from the exhaust, but it was definitely in the right direction. By the time we’d finally sorted out the problem it was 8pm and we were losing light, so we carried on in search of water and a place to camp. We were going to knock on someones door to see if we could camp in their yard, but we ended up finding the perfect little spot by a creek. We had to go down a fairly steep slope to get to it, and when it comes to steep slopes I always forget that if you’re in first gear it can’t go any faster than very slow; my head always tells me otherwise and I instantly think that I’m going to go careering down at full speed! Thankfully I navigated it successfully and we hid ourselves away behind a tree, knowing full well that we weren’t really supposed to camp there.