We woke in the middle of the night last night to a thunderstorm and a flash flood in our tent! The rain was so heavy that the sides of the tent in the sleeping area were soaked within minutes, and there was so much rain that it was flowing in to the porch, over the ground sheet and out the other side, once we’d moved all of our saturated gear out that is. 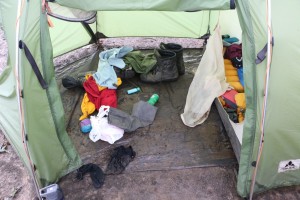 The rain had collected lots of mud and other crap with it on it’s way down to our tent, which it kindly deposited in our porch on its way through. It appeared that we couldn’t have camped in a worse place, and the morning was spent washing the tent and hanging our stuff out to dry, which we’d literally just hung up when the rain started again. Typical. 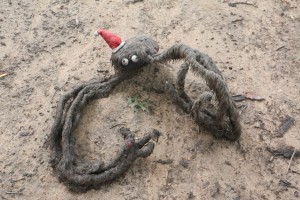 Admitting defeat we gathered our belongings up and headed in to town, in search of food and a roof over our head. It was there that we met Jim and Janice, who after ordering my meal snuck in in front of me and paid for it, I couldn’t believe it. They also told Ed to get what he wanted, and paid for his meal too. It was so kind and thoughtful of them, and being on such a small budget it was very much appreciated and a great help. 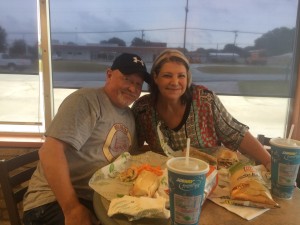 We chatted to them for a while before they went on their way, and soon the rain stopped and the clouds cleared, giving way to some beautiful blue sky and a very hot sun. 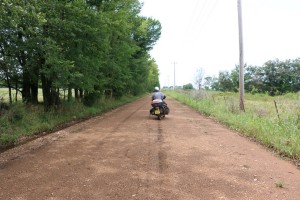 The terrain looked really easy to ride on, but with lashings of rain thrown in to the mix it was a bit like riding on creme brûlée; crunchy on top but soft underneath! The bikes wobbled all over the place but we managed to stay upright, and enjoyed endless fields of farmland sliced up in to squares and rectangles with red dirt and gravel roads. 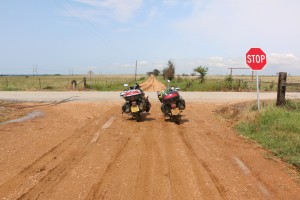 The sun was blisteringly hot, and as we stopped to take a photo and get some footage the sweat instantly trickled down our backs, getting us both rather hot and bothered, desperate to get moving again to cool down. 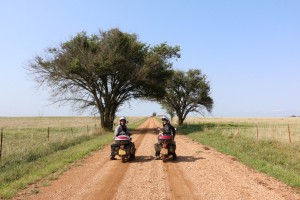 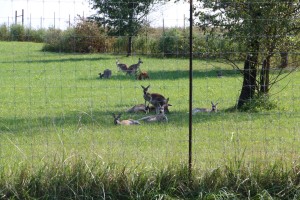 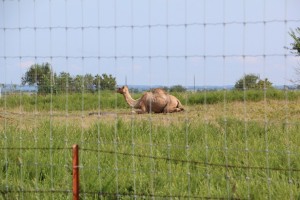 We were rather confused as to why they would be in Oklahoma, but after chatting to the owners we discovered that it was a kangaroo farm, and were told much to our surprise that America is the largest producer of Kangaroos for export with Australia apparently no longer exporting them. They are sent all over the world for meat, medicine, zoos and wildlife parks, and the camel was used for rides at fairs and the like. I did ask if you could milk a camel, and much to my surprise I was told that you could and that there was a camel farm just up the road that did just that; every day’s a school day!

Despite the scenery not being spectacular I really enjoyed the days ride for some reason. The terrain became easy to ride on, which left me to gather my thoughts and completely enjoy everything around me. I felt completely in touch with nature, and revelled in it as a bird flew alongside me, before swooping in front of me and flying off in to the distance; I felt completely content, enjoying where I was and the simplicity of it all. We’d been told that Oklahoma was flat and boring, but today that couldn’t have been further from the truth. 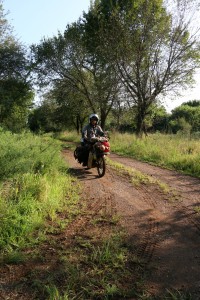 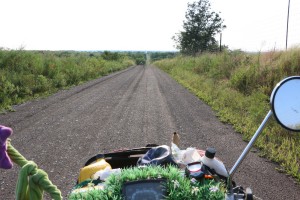 The trail ran along fields, past farmland and through woodland, and as we stopped to refuel and top up my oil we heard some noise behind us and discovered that it was two larger motorcycles. Their riders were Ryan and Chris, a couple of Americans who had set off solo but found each other a week ago, quickly discovering that it’s much easier to pick up your heavy bike with an extra pair of hands. 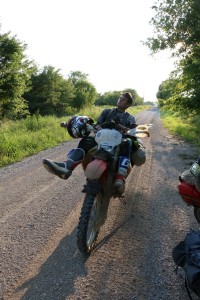 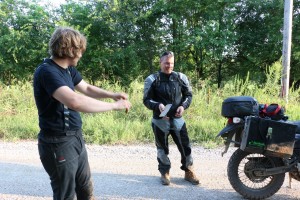 It was great to chat to them, but as always they were riding at a much faster pace than us, which isn’t hard, and were also making a slight detour to stay with Ryan’s dad in Kansas.

They disappeared off in to the distance and we continued on our way, eventually passing them again as they’d stopped to make a phone call. We kept our eyes peeled for somewhere to camp as we’d been told that there was nothing for us at the nearest town, and lucked out when we found a picnic/camping area for $3 a night each; bargain! 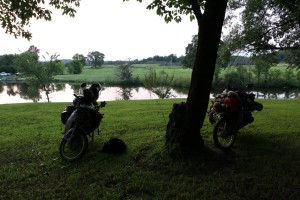 It was right by a lake, and after a surprisingly tasty freeze dried meal we were treated to some rather cool wildlife in the form of two owls and an armadillo. 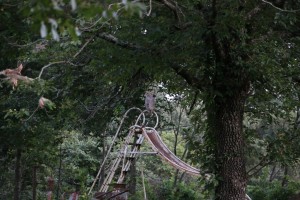 We’d sadly only seen dead armadillos so far on the trail, so it was a real treat to finally see a live one. They really are the weirdest creatures, they’re almost prehistoric. We stood very still while it wandered around our feet, but as I spoke to Ed is got spooked and did a rather funny run off in to the bushes. 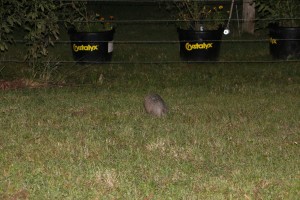 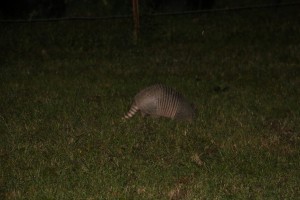