We had another late start today, despite me getting up early for an advertised free breakfast that didn’t exist. It didn’t feel as hot as the previous few days, as the hot hair dryer feeling was replaced with a much cooler breeze. I’d been a bit sad when my new pet Jiminy Cricket disappeared one day (he’d been residing on my engine for a week), and wondered if he’d been reincarnated in to the much bigger less cooked green grasshopper that decided to join our ride on Ed’s arm. 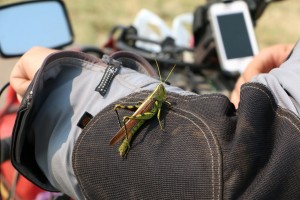 The day started off with gravel roads, before a surprise section of sand saw me wobbling all over the place. Of course it wasn’t long before I’d fallen off, always much to Ed’s amusement. This time my fall was accompanied with ‘Oh Edwin, I’ve fallen over’ over the intercom, which added more hilarity to the situation. 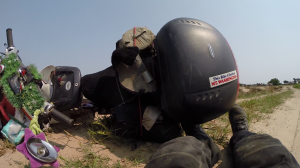 Contrary to popular belief I can actually ride, it’s just that I don’t like ruts, my bike has no power, and sometimes my hands work at a different rate to my head.

After that we had miles and miles of compact dirt and sand, with beautiful fields of yellow flowers lining the way. 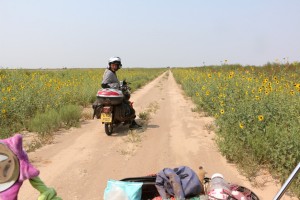 We were just taking another one or the many turns from straight road to straight road, when Ed suddenly went down on some slick, wet and sticky mud. An overzealous irrigation system had been happily soaking it all day, ready for some unsuspecting victim to ride over it completely unawares. I was happy that Ed had finally fallen off, in a non mean way. It was nice not being the one flat on my arse for a change! 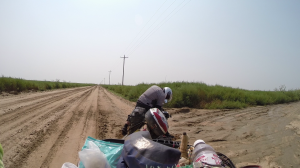 It would be an absolute nightmare to ride on the dirt if it was wet, and I for one was particularly thankful that we’d lucked out with the weather and sunshine, even if it was unbearably hot at times.

It seemed to be dirt and gravel roads when we were travelling west, and loose or compact sand whenever we turned south, with the odd exception. Crickets dive bombed me from all directions with all their force as Ed’s bike disturbed them, and after one managed to get down my top causing me to stop and break out in what only can be described as a very bad version of body popping, I was forced to ride with my jacket done all the way up despite meaning that I cooked in the blisteringly hot sun. 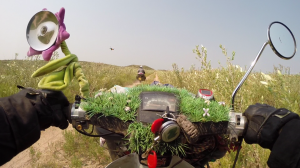 I have to say though I thoroughly enjoyed the free foot massage that I got from all the little bushes and shrubs that lined the trail; my foot pegs were just at the right height for my boots to get a good buffering.

I was fully focusing on keeping myself upright, when I looked up in front of me to see Ed on his arse again. ‘Don’t worry, I’m coming!’ I said, half expecting to conduct the most useless rescue mission ever by falling off immediately. But I managed to make it all the way over to him to discover that he was trapped under his bike with what looked like a broken leg. 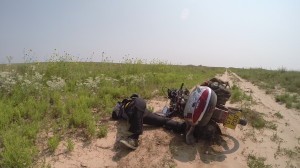 If it wasn’t for him not screaming in pain I could have easily believed that it was broken, as it was twisted at the most awful angle with his foot facing the wrong way. Thankfully after freeing him we discovered that he’d just twisted it, much to our relief. 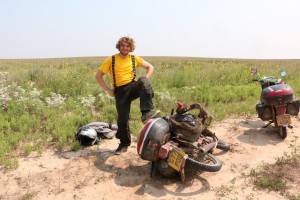 We stopped in Boise City for some food and fuel, which really wasn’t anything like a city as we know it. That’s the problem with place names, they lure you in to thinking that they have a lot to offer, when in fact they don’t really have anything at all.

Looking at a map we noticed that we were near a place called Amarillo, which reminded us of a song by Tony Christie ‘Is this the way to Amarillo’. This lead to Ed asking unsuspecting members of the public if it was the way to Amarillo. We found this very amusing, and got completely away with it as all the Americans we’d ever asked about the song had never heard of it. 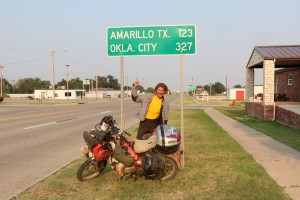 We left Boise shortly before 7pm, and had more roads of gravel, dirt, and loose sand. The roads were so long and straight, and went as far as the eye could see. I soon found myself thinking ‘Ok, I get it, it’s straight!’ and finally realised what those people had been talking about when they said that Oklahoma was flat and straight; they weren’t joking after all. 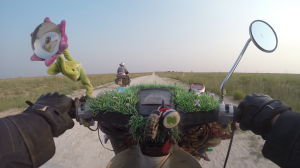 I was doing really well in the sand at one point, telling myself to power through when I got a wobble, which completely did the trick despite not really having any power. I actually had to slow down a few times as I’d caught up with Ed, which isn’t a reflection on Ed’s riding, I’d just lucked out with the side that I’d chosen to ride on. I was going to overtake him but decided not to push my luck; it would no doubt result in a spectacular crash and I couldn’t be bothered with the hassle.

After many more miles of gravel and dirt we got back on to the loose sand again, but I appeared to have lost my mojo and wasn’t doing quite so well. I tend to get like that once it’s late in the day and I’m tired, and throw in to the mix really deep and large sandy ruts and you have a recipe for disaster. Well I say disaster, I actually just lost control and ended up in a bush. It was quite funny as Ed said he couldn’t see me up ahead, and thought ‘Wow, she’s really going for it’, when in actual fact I’d fallen off and was hidden in the foliage. 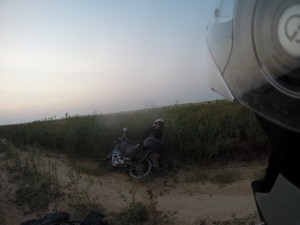 We carried on for a very short distance before deciding to put the tent up next to the trail. It was fairly hidden from the road and disguised in all the green, and having had enough for one day I didn’t really care if we were spotted. Ed in his wisdom decided to let down his front tyre, so if an angry farmer came we could just say that he got a puncture and it was too dark and late to fix it. It’s actually quite a good trick, but just be sure that you still have your pump and that it works before you do it, otherwise you’ll feel like a bit of an idiot in the morning. 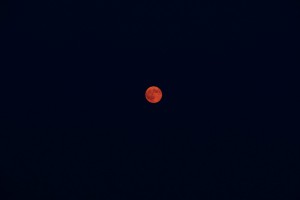