After our usual get-your-moneys-worth-motel sleep in, I headed off to the post office to collect what looked like a months worth of dried food. I had no idea where I was going to put it all, but after some strategic packing I managed to squeeze it all in with my panniers literally bursting at the seams. While I’m not really a fan of dried food, I’m less of a fan of not having any food, which is why I’d got a little over excited with the ordering. After fuelling up, oiling the chains, grabbing a few things from Walmart and stopping by at a thrift store for a tiny cowboy hat for spidey (that will make sense later) we finally left town around 5.15pm with darkening and threatening skies above us. 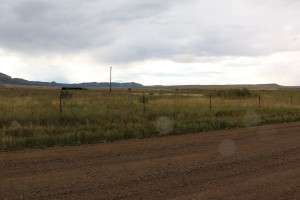 Rain poured out of every cloud in the distance, but thankfully our route was spared and we only had a few minutes of spitting. Gravel roads took us away from the town with hills in the distance, and before we knew it we’d arrived at a road closed sign, with the road now a massive ditch. 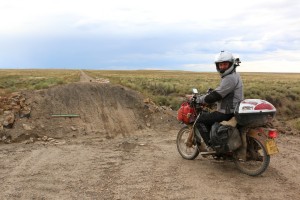 A diversion took us around it, but of course Ed had to go the closed route, which left me laughing at the top as he didn’t have enough power to get up the other side and had to resort to pushing it. I should have had a go myself, but seeing as I was now packing a few more kilos of food I suddenly had a good excuse not to. 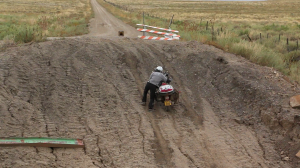 We eventually got in to the foothills which I thoroughly enjoyed, I don’t know why but there was something really lovely about it. It was simple scenery and terrain; easy on the eye and mind. 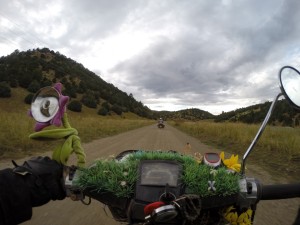 There were lots of cows roaming around which always make me feel a bit wary, and I decided that the ones that make me feel the most nervous are the ones that don’t moooove. (Sorry, couldn’t resist). They just stand there and stare you out, seemingly aware that you ate one of their cousins the night before. 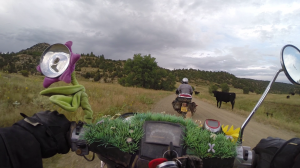 The trail continued through the forest, and there were a surprising amount of properties on the road. It’s funny because you always feel like you’re in the middle of no-where on the trail, but when you look at the map you discover that you’re actually quite close to a main highway.

The rolling fields and forest provided pleasant riding, but it was when the mountains came in to view that I started getting excited. That’s the fun of the trail, there’s always something new and interesting just around the corner. 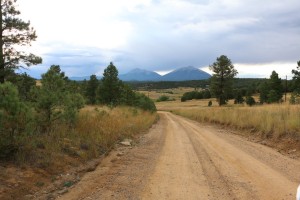 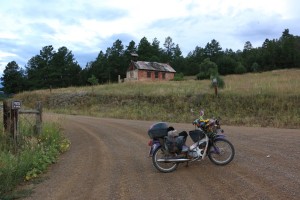 The temperature started to drop as the sun started to set, although we couldn’t see it unfortunately because of all the clouds. It was around 22C but it felt much colder as we’d both acclimatised to the heat, and I was even forced to put my fleece on. There weren’t any campgrounds nearby but with endless fields of hills and trees it was easy to find a place to hide, and after putting up the tent we set about attacking the huge stock of dried food that I’d acquired. Ed actually opted for a ration pack that we’d been carrying around since Jessica gave them to us, and he was left mightily impressed with the self heating bag that you just add a small amount of water to; I think it’s a guy thing.

It started to rain as we were having our dinner but it wasn’t much, and we sat happily under our brollies watching the moon rise amongst the clouds, with lightening striking around it. 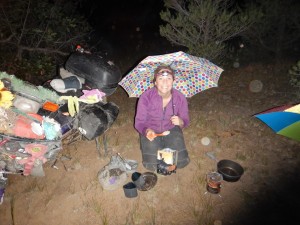