We’d planned to ride the White Rim Trail and Slickrock on arrival in Moab, but both bikes needed some attention first. Ed’s bike wouldn’t actually start again due to the pickup coil packing up, and mine ran but pumped out copious amounts of smoke while it did so. Turned out the instant gasket I’d used was less instant gasket and more instant mess. 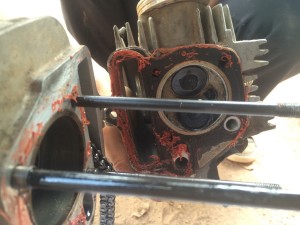 Ed’s was an easy fix and he ordered a new coil off eBay for $10, but we were struggling to locate the correct head gasket for my bike. Being a random Lifan engine it wasn’t as easy as just ordering with the Honda part number, and once again I was left wishing that I had a Honda engine. Ed finally found one and ordered it for me, but what should have taken 2-3 days to arrive took 5 days.

I was quite happy though as I had yoga lessons, blog writing and cafes to keep me occupied, and Ed was quite happy as he could continue programming his Arduino, plus he got to play around with some old Honda engines that he’d found nearby. We’re desperately trying to find an old Honda 125CC engine that will slot in to our bikes, and we think we might have finally found one that’s compatible. 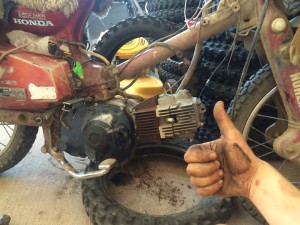 While I was in town I got a surprise when the Moab Pride procession went by one afternoon, full of colourful characters. It really made me smile as it made its way past, and I suddenly noticed that my bike would have fit in perfectly. It would have been particularly funny if Ed had been riding it, we definitely missed out on a photo opportunity there! 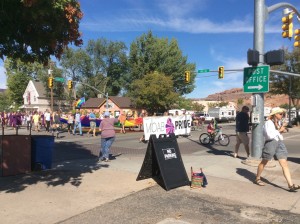 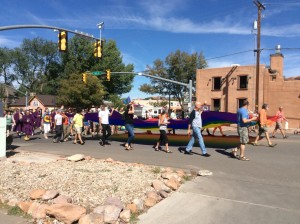 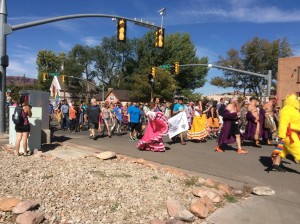 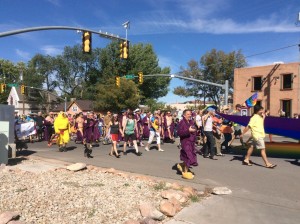 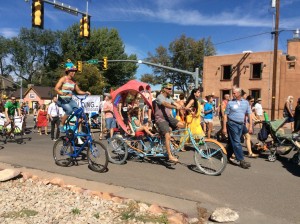 We also got another surprise when a couple called Sarah and Tom came over to us while we were having breakfast, and impressed us with the fact that they were doing the TAT on bicycles!! That’s another level as far as I’m concerned. They were really lovely and it was a pleasure to chat to them. 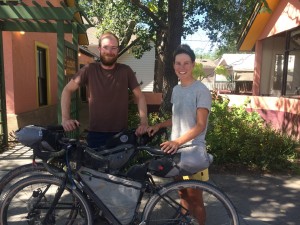 And as we stayed at the hostel the whole time we also met some really interesting people there. One guy in particular sticks in my mind. He was called Paul and was a musician from Salt Lake City, and knocked on our door one night to give us his tips from his gig that night! It was nearly $80, we couldn’t believe it. He said that to be able to receive and be grateful you should know what it is like to give, and that’s why he was giving us his tips. He loved what we were doing and wanted to help us, and as he’s received a lot over the years he wanted to give instead. How incredible and heartwarming is that? It was a shame that it was so late and that he was leaving the next morning, as I’d have loved to have spent some more time with him. He was a creative and charming soul with wise words to boot, not to mention a very talented musician. 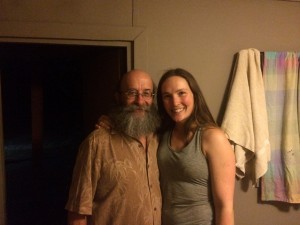 And it wasn’t just human friends that we made, as Ed befriended a dove and then subsequently the hostel cat. Very funny. Unfortunately though the cat then tried to claw Ed’s eye out trying to get the bird. That’ll teach him! 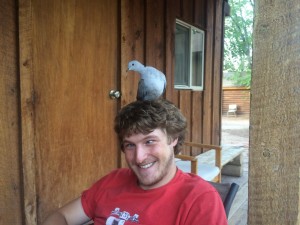 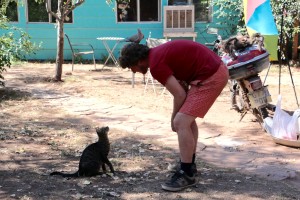 Thankfully the gasket finally arrived and I rebuilt my engine, only to kick it over and discover that the base gasket was now leaking. Really?! It had certainly seen better days, and not wanting to wait another week to source and receive the correct base gasket Ed went and bought a roll of gasket paper and cut one out for me. He did a grand job of it, and after I rebuilt my engine for the fourth time in less than two weeks, we were finally up and running again, minus the smoke and leaking oil. Oh and we finally acquired and fitted some sump guards. After I’d broken off the sump guard protector on my engine and Ed had managed to pinch and sheer off his exhaust, we decided that it was probably a good idea to fit some.