As my vehicle attracted even more attention now (I didn’t think that was actually possible) getting out of Moab was tricky. We couldn’t go down the main high street so opted for the backroads, then found a bicycle path which took us alongside the main highway and definitely didn’t say no motor vehicles. We were only doing 15mph though, which was slower than the one bicycle we saw the whole 8 miles, and it was safer than being on the highway. We felt like a couple of convicts on the run, happy when we were hidden by trees and eventually up a hill and out of sight. 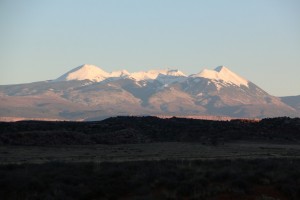 We soon got on to a gravel trail which we were actually allowed on, and as I stopped to pick up a bottle of oil that went flying out of Ed’s basket, I smelt a really funny smell. At first I thought it was melting paint or plastics, but after checking the rear of the trike and the plastics over the exhaust, we couldn’t see anything untoward. Ed could smell it too, and after trying to get my trike to start and subsequently failing, we soon discovered on further inspection that my lithium battery was melting! 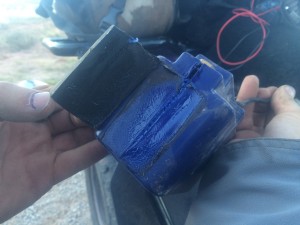 Thankfully our bikes can run without a battery, so we quickly disconnected it before it caught fire. Funny how things work out; if Ed hadn’t dropped the oil then I would have kept on riding and my trike might have caught on fire! Good old serendipity. 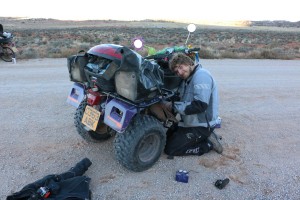 We also discovered that my bike had randomly and rather inconsiderately used up all of its oil, and having only one litre spare this proved to be quite a problem. Ed decided to ride to the nearest fuel station about five miles away to get some, but after discovering that it was closed he asked a couple of dirt bike riders if they could spare any. They kindly gave him two litres of oil and wouldn’t accept any money, despite Ed insisting, and he soon returned and we went on our way. 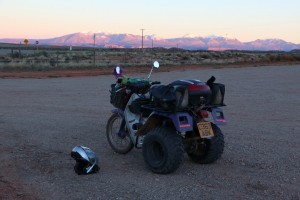 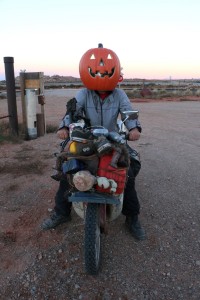 Light was dropping and we probably should have gone back to Moab or camped there, but we’d tried to leave on so many occasions that we just wanted to get on our way. It was fairly technical out of Moab, but Ed was an absolute champion over the intercom and did a sterling effort helping me navigate my way over all the rocks and bumps; I literally couldn’t have done it without him. It was a fairly steep and rocky climb and before we knew it we were looking out over the highway below. 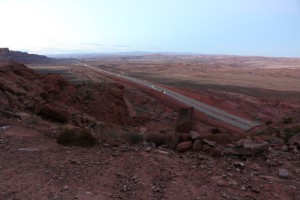 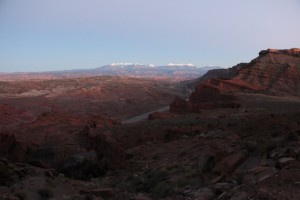 Sadly it was a bit too dark for photos after that, but to be honest I was just overjoyed to be back on the trail again! All my focus and attention was on Ed’s instructions, my riding and the trail. Next we had a river bed to navigate, with rocks and the odd scary bit of camber. There were two obstacles that I didn’t fancy tackling, and I didn’t hesitate in asking Ed to do them for me. I’ve got nothing to prove when it comes to riding the trike, I just want to get to the end in one piece!

It wasn’t long before it was completely dark, and although I’d normally be opposed to riding at night, it was actually really enjoyable. After reading several ride reports I knew that there weren’t horrendous passes or cliffs to go flying over, and with our headlights lighting up the trail and Ed over the intercom, it really felt like we were in a slow motion replay of ‘Wacky Races does World Rally Championship’. It was great fun, and a good challenge.

I was also incredibly impressed with Ed’s multi-tasking. Not only did he have to ride his bike and stay upright, but he had to think like he was riding a trike and give me instructions of where to go while riding and looking at the next obstacle. He was an absolute star. It was also good as there weren’t any other vehicles on the trail, and the more miles we covered the more my confidence increased. Cambers were no longer seen as slopes of doom, and I was soon moving my body weight around without even thinking about it.

As we continued the terrain began to level out; rocks were replaced with multiple deep washes and the packed dirt was replaced with moist powdery sand. Ed had a couple of front end washouts and was all over the place at one point, but I was completely oblivious to it being slippery, as the trike didn’t miss a beat. It just chugged right over everything effortlessly, and the big fat tyres did a grand job of soaking up all the bumps. All I had to do was look out for rocks and ruts and things that would make me tip, make sure I didn’t hit the washes too fast so my back and knees didn’t take a pounding, and take them at the right angle so that my rear wheels took them head on. Simples.

This did however mean that we travelled at an average speed of about 15mph, but I didn’t care, and I also didn’t care that I didn’t know what the scenery looked like. I normally hate to miss out on scenery, and I would love to be able to explain exactly what it looked like, but I was just ecstatic to be back on the trail. It was all rather surreal to be honest, I couldn’t quite believe that we’d actually pulled it off and left Moab!

The temperature really started to plummet as we continued, so we stopped for Ed to put his thermal liners in. It was then that I happened to glance up at the night sky, and found myself completely in awe. I hadn’t seen that many stars since being in the outback in Australia, and found my mind being blown as I followed the Milky Way from horizon to horizon. I’m aware that I’m very lucky being able to do what I do, and after the recent setbacks I decided that I was going to do my best not to take anything for granted on the trail; not a single star or a single mile. After all, finishing the trail and getting to Oregon wasn’t guaranteed, so I didn’t know which mile would be my last.

Even the last thirty cold, hungry and tired miles to Green River weren’t as bad as they could have been, all because there was that thought in my mind that I nearly wasn’t able to ride them at all. Needless to say I was daydreaming for a good hour about a warm motel room and a comfortable bed, and as my heated grips weren’t working I stopped several times to warm my hands on Ed’s exhaust.

Thankfully I’d already booked a room so I knew I wasn’t going to be disappointed, and after a stretch of paved road I had a huge sense of relief as we finally arrived at the motel. There we were greeted by the manager, Wayne, who was an absolute star and a real character. He quickly sorted us out with a room, an extra heater, a milky hot chocolate and also gave us a lift up to the store for some food. A happy end to our first day.