Having had enough of being cold, Ed decided that it was time to go and buy another layer, so after a lazy morning we headed in to town. We love riffling through thrift stores, but as Gunnison didn’t have one we had to make do with the local dollar store. It was there that we found a cracking little number in the form of a leopard print onesie, which had me laughing every time Ed unzipped or took off his jacket. 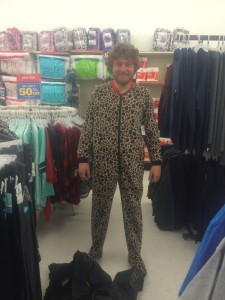 I suddenly felt like I was travelling with a gay best friend, and took great pleasure out of laughing at him. 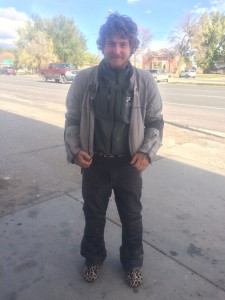 It was a relatively short day as far as miles go, and completely negating the fact that something almost always goes wrong, we stupidly didn’t leave until around 12.30pm. I’d done my usual checking of the weather that morning, something that was becoming a bit of an addiction, along with studying the route, and as I was informed it would be sunny I was rather surprised to see storm clouds everywhere. They were literally in every direction and closing in on us at an alarming rate.

From Gunnison it was a mixture of pavement, gravel roads and dirt trails, that ran alongside the main road. As we happily rode away from the storm clouds the trail took an unexpected turn, and my heart sank as we found ourselves headed straight towards the biggest blackest cloud in the sky. 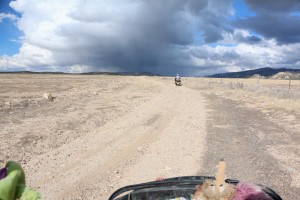 It was absolutely huge and resembled more of wall than a distinguishable cloud, and I was quickly coming to the realisation that it wasn’t going to be the easy day that I’d hoped for. 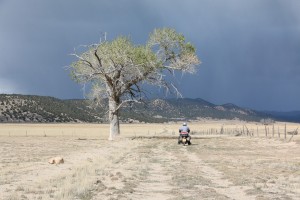 After passing through a gate and following a grassy dirt track alongside a field, with my far from favourite bastard bushes (little ones that throw me around all over the place), we got on to a graded gravel road and continued towards the cloud of doom. We could see that it was raining in front us and got ready for a soaking, but as we got closer we soon discovered that it was actually snow! 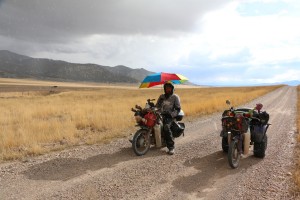 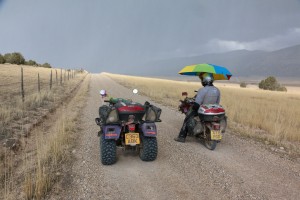 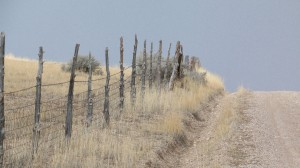 I couldn’t believe it. The TAT had taken us so long that it was now snowing. And at that exact moment I spotted that Ed had a flat rear tyre. Joy. It must have been some barbed wire that Ed spotted at the last second near the previous gate, and hopeful that the Slime we’d put in the tubes might seal it, Ed pumped it up and we continued with our fingers crossed. 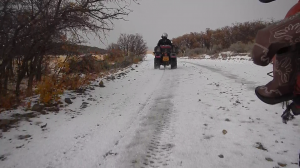 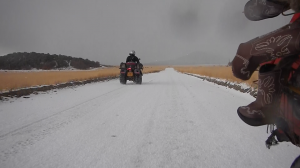 The snow got heavier as we climbed up a relatively small mountain pass, but despite not actually going up that high it got bitterly cold. My hands were freezing in my leather gloves and without heated grips, and I couldn’t wait to be out of the situation.

The trail soon became completely covered in slippery slushy ice, and just as it seemed that it couldn’t get any worse, Ed’s tyre went flat again. It was far too cold to fix it properly there, so he just put some more air in it so we could get down the hill and out of the snow.

It was great to be down and out of the snow, but it was still freezing. We stopped by the side of the road and Ed set about fixing his tube, but he couldn’t find the rubber cement and had to resort to using Exped inflatable mattress glue. ‘Will that stuff work on a tube?!’ I asked. ‘Don’t know’ he replied, ‘Hopefully!!’ Indeed.

It was so cold that I kept having to warm my hands on Ed’s exhaust, but was happy that I now had an excuse to eat some emergency peanut butter (another addiction of mine). 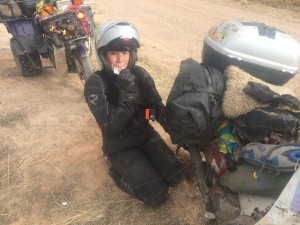 I had to reluctantly take off my jacket and fleece to put on an extra t-shirt, base layer and neck tube, but it was worth the few seconds of misery as I instantly felt better. I just wished that there was something I could do about my hands and feet, especially as I’m a bit of a hypochondriac when it comes to the cold; as soon as I can’t feel my fingers and toes I’m convinced I’m going to get frostbite.

We continued on but the patch only lasted around ten miles or so, and once again we were forced to stop in the cold. Of course it happened in the middle of no-where with no shelter in sight, but I did my best to shelter Ed from the unrelenting wind. It was the least I could do as he was having to do all the work. 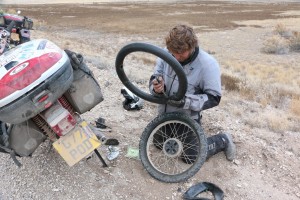 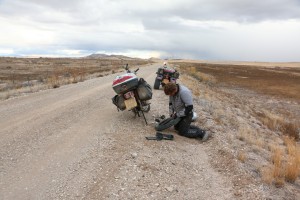 The ride after then was horribly cold, and particularly miserable for me. My hands really hurt and it started setting in to my toes, and my body started to become chilled forcing me to shiver rather violently. I spent the whole time praying (to who knows what as I’m far from religious) that we didn’t have to go over another mountain pass, well aware that it would have finished me off. Of course Ed was absolutely fine and blissfully unaware of my torment.

As I rode along feeling miserable and freezing, I started having doubts about my future on the TAT. The general gist of my thoughts was ‘Fuck this’, and ‘I’m not continuing if it’s going to be this bloody cold!’ And rather hilariously this was all coming from a person who crossed the width of Canada in the winter; I’d obviously become soft after a few months in baking heat. Needless to say that I really wasn’t enjoying myself, and at that particular moment in time all I wanted was to be at home, snuggled up on the sofa in front of the fire. Can you really blame me?

Thankfully we didn’t have to do another pass, and much to my relief we skirted around all of the mountains. It was actually really lovely scenery as the sun finally came out, and much to my surprise I actually started to enjoy myself a bit. I’m a sucker for scenery and there were some really beautiful hills, and the low level sun cast a warm inviting light across them. 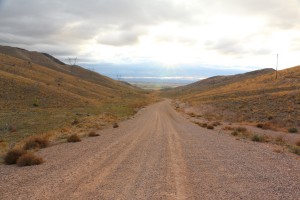 As we rode down through some National Forest which was more National than Forest, we were greeted by a huge expanse of fields with moody looking mountains in the distance. It looked like we were finally getting to the rugged stuff, which was highly anticipated after all the ride reports I’d been reading. 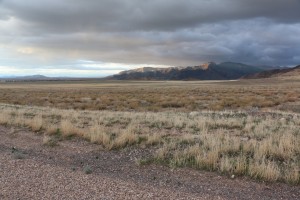 Despite having a rough idea of what we had to come, I still felt like we were riding in to the unknown. After all, all the reports I’d read had been from people travelling in the summer and Autumn, winter could be a completely different story. 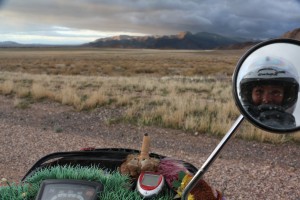 A paved road took us through two small towns, before turning off on to another gravel trail as dusk fell. We’d literally just turned on to it when Ed suddenly came to a wobbly stop, looking down at his rear wheel. A mere ten miles away from our destination of Delta and Ed’s tire had gone flat, again. ‘Sod’s law!’ I thought. I’d been fantasising for some time about getting in to a warm motel, so this further setback was very inconvenient and unwelcome, but as is always the case with obstacles and hurdles on the road, you just get on with it and find the best solution. The solution in this case was to flag down the next pick-up truck we saw, as we didn’t have another spare tube or rubber cement to do the repair, or the enthusiasm for that matter.

Thankfully for us we flagged down a pick-up truck owned by a friendly guy who kindly gave Ed and his bike a lift to Delta, while I rode the last ten miles on my own. This was fine apart from the lack of light; I didn’t realise just how much I relied on Ed’s headlight. My poor headlight was suffering after being smashed in to the ground on several occasions, and as it bounced around like a deranged rabbit I did my best to ride at a decent pace while dodging all the potholes.

The gravel trail ran parallel to the road, and as it veered off in the wrong direction I got back on to the road and did the last few miles on the shoulder, as it was a 65mph limit and dark by this point. It wasn’t long before I rolled in to Delta around 6.30pm, and made my way to the motel where Ed was waiting. It was such a relief to get somewhere warm after such a cold and seemingly long day, and after some food in the adjoining restaurant I slipped heavily in to hibernation mode, burying myself deep under the covers before falling asleep.