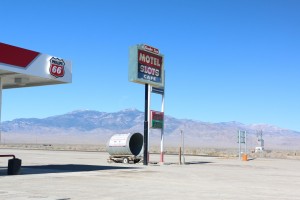 The first job of the day was to change the oil in my bike. Having clutch slip is soul destroying at the best of times, but when you’ve got limited time and long distances to do, in the freezing cold, it’s really something you could do without. We flushed it out with some cheap oil, and then filled it up with some good stuff, hopeful that I’d be able to do a decent speed.

We took our time even more than usual in the morning, as we discovered we’d crossed a time zone. We had however got it wrong, and somehow managed to work out that we’d gained an hour in the morning, AND gained an hour in the evening, which we only discovered after we’d left at 11am. This meant that it was going to get dark an hour earlier than we thought it would, and as we would have already been pushed for time, it now meant that getting to our destination in daylight was basically impossible. We set off though, vaguely optimistic, hoping for some quick easy miles, which never came.

Despite it being a bright sunny day there was a freezing chill in the air, so I put five layers on, two pairs of gloves and a balaclava. We took a paved road from the motel, and the trail soon took us on to a single vehicle track of dirt and sand, surrounded by scrubland with mountains in the distance, where I promptly began to sweat my tits off. It was absolutely roasting riding off-road, with all the little movements creating heat, so I was forced to stop and whip my layers off before they got soaked with sweat. The last thing I wanted was damp clothes, especially once the sun goes down. 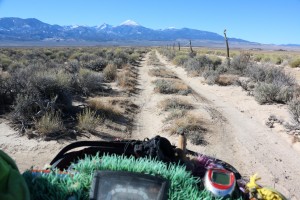 I’d literally just been thinking that the trike was going to be perfect for Nevada, when I suddenly got thrown around violently from side to side. The terrain looked fine, almost easy, but as I looked closer at the ground I saw the culprits; lots of tough little bushes impenetrable to my big fat tyres. The trike bounced over each and every one of them, throwing me around in the process. 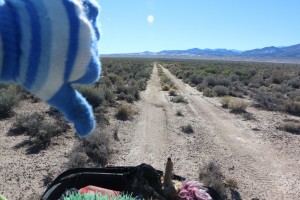 It was really slow going and an absolute mission. I couldn’t go fast as I got thrown around like a rag doll, and as the trail got tighter and tighter the bastard bushes closed in on me, forcing me to slow down even more. Had you only been able to see my top half, you could have easily been led to think that I was riding a camel. 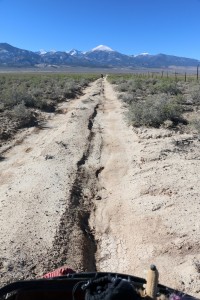 Along with the bastard bushes were vertical washes, which proved to be another pain for me and the trike. Whichever side of the trail I took the other side looked better, and as switching sides wasn’t as easy as it was on a bike, I just had to stick with my choice and ride it out, however much of a bitch it was. But to be honest every route I could have taken would have been bumpy for one reason or another, so there wasn’t much point in switching sides; six of one, half a dozen of the other.

Ed and his bike had been winning so far, but when it came to a water crossing the trike came in to its own. It ploughed through the water effortlessly, chugging over any obstacle that lurked beneath the surface. It was more of a leap of faith for Ed, but he got through unscathed, apart from slightly wetter feet. 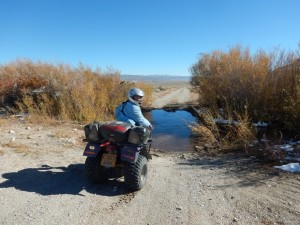 At least the sun was out to dry them, but despite the sun having some heat to it there were still some remnants of snow; reminders of what’s to come. 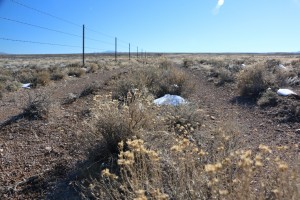 We ended up on a long straight which was a bit easier for me, and just as I started to get a decent amount of momentum, Ed came to a wobbly stop. He’d got a flat rear tyre, and on further inspection we discovered it was a bit of a weird one. 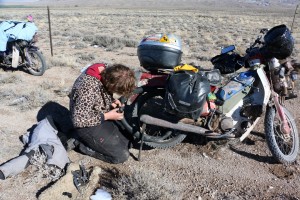 The inside of the tyre was somehow rubbing on the tube, creating lots of tiny little holes, and a few had finally gone all the way through, which is why it had gone down. All we could do was patch up the holes that had gone all the way through, but we were well aware that it was a problem that wasn’t going to go away without acquiring a new tyre, which wasn’t going to be easy in the arse end of no-where. We couldn’t even put our spare tube in there as the same thing would happen to that one, so Ed stuck the patches on and we kept our fingers crossed. 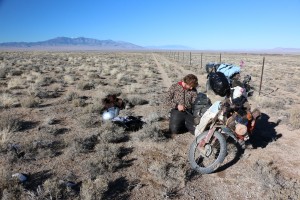 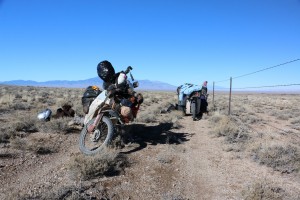 The bastard bushes continued, much to my delight, and shortly after going through a gate the trail became incredibly hard to see at times. Had it not been for our navigation system we wouldn’t have had a clue where to go. It was either overgrown or nonexistent, but we managed to pick our way through following the route on Ed’s phone. Even that wasn’t easy at times, as the route would be slightly off and we’d miss the turning. 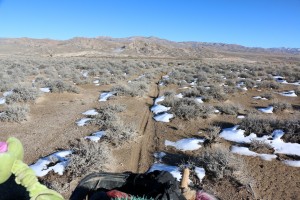 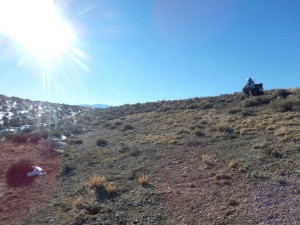 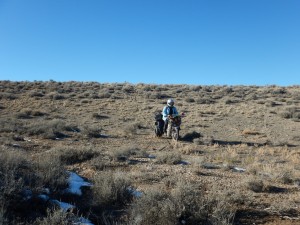 It wasn’t flat either, with hills and slopes to navigate. At one point I even managed to lose Ed, and had to come to a stop having become disorientated and completely losing my bearings (although if I’m honest I don’t think I ever had them). I looked all around me momentarily panicked and couldn’t see him, and was just out of range on the intercom to call him. Everywhere looked the same, but thankfully after a minute or so I heard his voice, before he appeared just over a hill looking for me. ‘Why are you back where we’ve just come from?!’ I asked him. ‘I’m not’ he replied, ‘We came from over there!’ ‘Oh’, I thought, ‘thank goodness I’ve got Ed and his phone with me, otherwise I’d be going round in bloody circles!!’

We got back on to flatter terrain with the mountains to our right, and had to dodge deer on several occasions as they bounced across the trail in front of us. 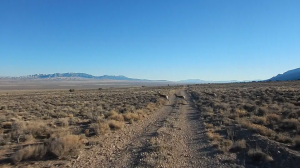 Trees soon became part of the scenery, and we passed some wooden shacks and even a house, before the trail took us round the side of the mountain. The vertical washes I’d had to deal with earlier looked like nothing compared to what I had to tackle here. 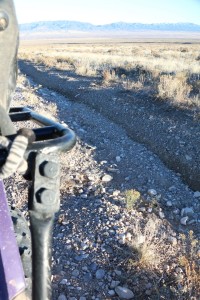 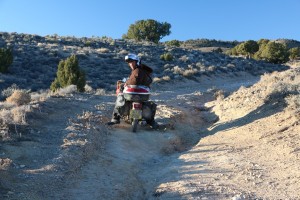 The washes were much longer and much deeper, and very easy to get stuck in. I discovered that putting my front tyre in them was the best course of action, with the rear tyres either side. You had to commit to a route though, because once you were in it there was no way of getting out, unless you rode out of it. The problem was however, that you didn’t know how deep a wash would end up being at the start. On more than one occasion I found myself looking longingly at the other side of the trail, wishing I was over there on the flat ground, instead of being stuck in a wash pointing down with the arse end of the trike up in the air. 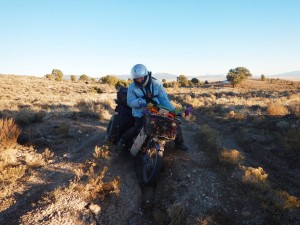 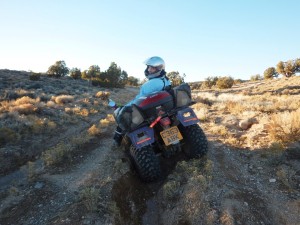 We went up and over a hill, wowed by the vastness of Nevada, and its enormous wide open spaces. 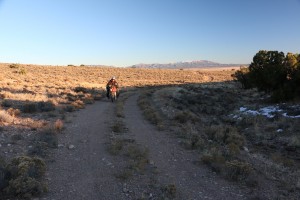 A few steep up and downhill’s later and we found ourselves in a dried up river bed, where Ed got wood, literally. 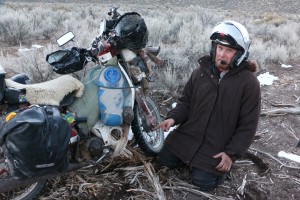 A massive piece went flying up and under his leg shields, taking off his spark plug cover and cable, immobilising him immediately. Fortunately there wasn’t any permanent damage, and we were soon on our way again, following the river bed and eventually climbing up and out on to higher ground. 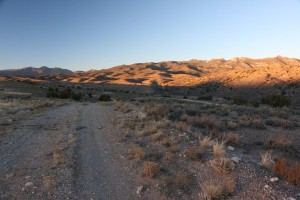 There I got the most incredible view. Normally I like to stop and soak in the scenery, but this was one occasion where you actually got the most out of it from moving. The sun was starting to set, casting the most glorious golden light over everything around me, and as I slowly rode the shadows moved continuously over the land, playing tricks with the undulations on the mountains and scenery around me; it was mesmerising. 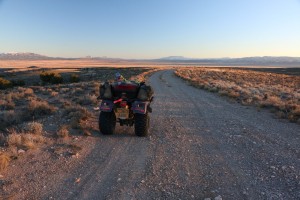 It was so huge, and so vast, that I couldn’t quite believe my eyes. There was sage green scrubland as far as the eye could see, with mountains along the horizon tinted with a soft pink hue. I can safely say that it was one of my favourite places and moments on the TAT. 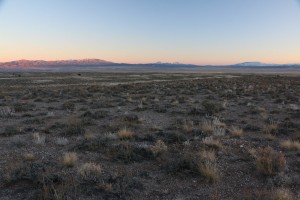 The light continued dropping, and we started looking for a hunting shelter or something similar to camp in, but we couldn’t find one. In fact there was absolutely nothing for miles, apart from the remnants of a cattle feeding station. Other than that, there was no other sign of civilisation. 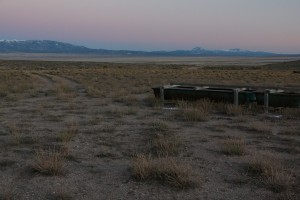 Eventually darkness fell, and although I knew Ed wanted to continue over what looked like a small mountain pass, I didn’t want to ride in the dark, so we decided to camp at the foot of the mountain instead. We found a nice little camping spot amongst the trees, and after a veritable feast on our stash of dried food, we buried ourselves deep down in to our sleeping bags, well aware it was going to be a chilly night.