As expected, we didn’t get a very good night’s sleep at all. It was really cold, and my feet were freezing as I’d failed to notice that my socks were damp. My back wasn’t too happy about being in a tent either, but I had a stretch and got on with it, hoping that we wouldn’t have to camp again. 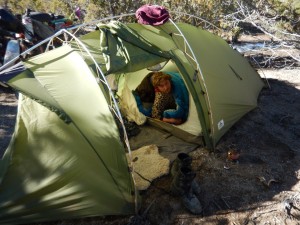 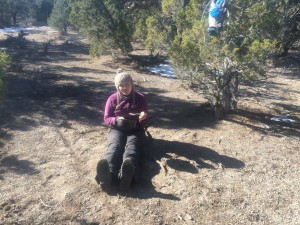 After a sit in the sun and some breakfast to warm us up, we made our way up in to the hills, and I spotted that we’d had a couple of visitors in the night… 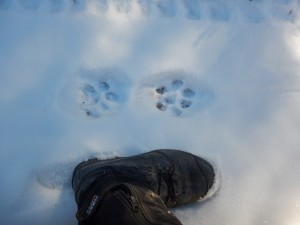 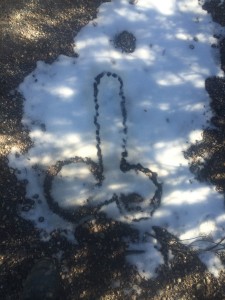 The terrain was fairly easy to begin with, just dirt and grass, but the tall bushes either side really started encroaching on the trail, which made it rather tricky. 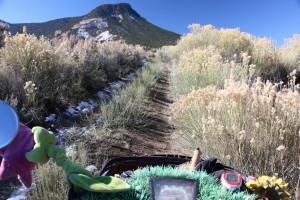 The trail then entered the woods, and we wound our way round the trees, along the rocky and partially snow covered ground. 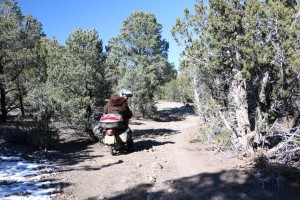 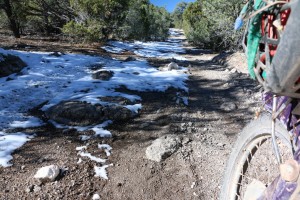 There were a few obstacles on the way, including a small ledge to get up, a few tricky washes, and a steep uphill slope, where I managed to tip the trike gently over at the bottom of it in slow motion, before failing to get up it. 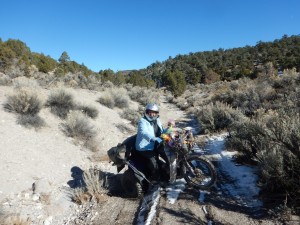 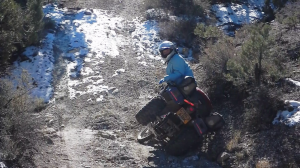 Even with a run up I couldn’t get up it, which was most strange as it should have chugged up effortlessly. Ed was convinced I was in second gear, but I was convinced I was in first, as the next one down was neutral when I tried it. On further inspection we discovered that my rear brake was stuck on slightly, and as my gear box hasn’t been right for quite some time, we figured that it was just playing up and I was in fact in second. Ed ended up riding it up to the top of the slope for me, and it was then when he stopped that I noticed that the bike looked wonky. 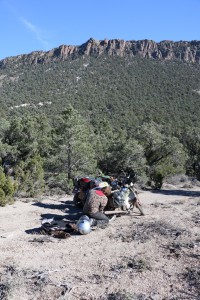 Thinking the worst we crouched down to get a better look, and discovered that the swing arm on the other side was about to snap. The first thought that popped in to my head was ‘Why didn’t we get that welded again when we got the other side done?!’ But there was no point going over the past, what was done was done, we just had to come up with a solution. 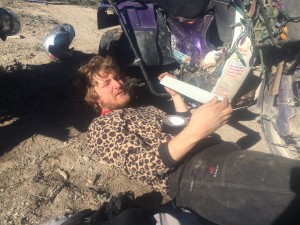 Ed set to work and managed to reinforce it with a wrench, some vice grips and lots of duck tape, but we had to take it really easy. 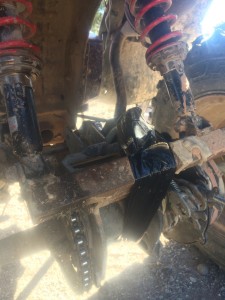 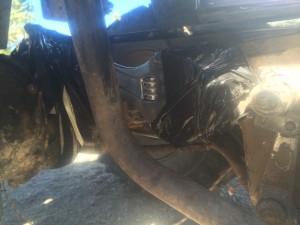 I looked at the route and discovered that we had 12 miles to go until we reached a proper road and help, which wouldn’t have been so bad had we been able to go above walking pace. 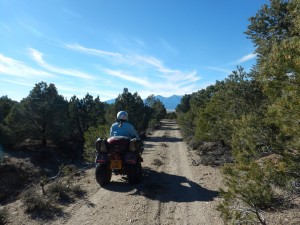 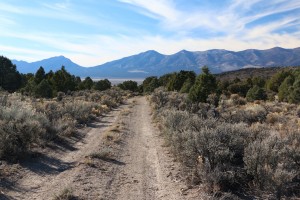 We had to keep stopping as the mole grips kept popping off, and every rock, bump and hole had to be carefully navigated to avoid twisting. 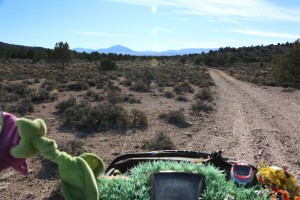 We eventually got out of the woods, only in the literal sense, and on to lower flatter ground, but it didn’t get any easier. The most frustrating thing was that we could see where we wanted to get to, but it wasn’t getting any closer. We even got excited when we thought that we could see lights from a distance over the road, but we soon discovered that it was snow. 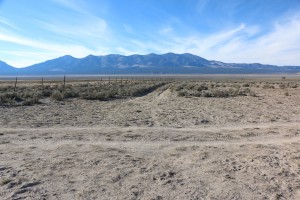 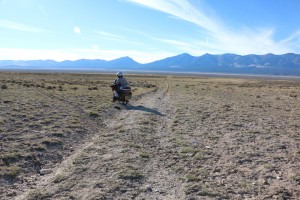 Eventually the swing arm snapped completely, and was really wobbly on what was already extremely uneven ground. I had to ride side saddle to stop it swaying from side to side, but it got too much for my back so Ed had to take over. 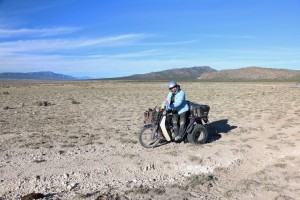 He managed to stabilise it with our axe, but he still had to take it really easy, to prevent the other side from snapping too. 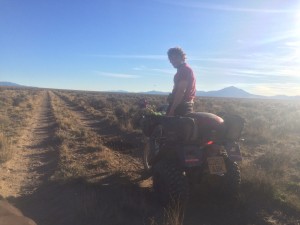 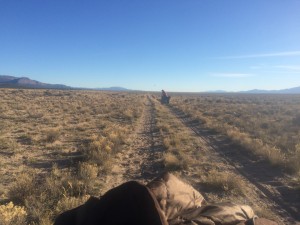 As Ed was riding the trike I had to ride his bike, which was really weird to start off with as I couldn’t get my balance! I was wobbling all over the place from side to side, like I’d never ridden a bike before. At one point I drifted off daydreaming and thinking I was still on trike, a thought that was quickly dashed as I went careering off to the side. Thankfully I got the hang of it again, and slowly followed Ed with my feet down, so as to avoid any ‘off’s’.

Some wild horses galloped in front of us at one point, and they looked so majestic with their manes flowing in the wind, covering ground quickly in this incredibly vast landscape. 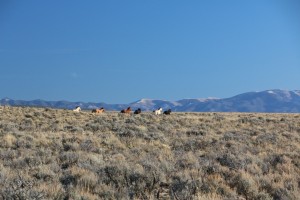 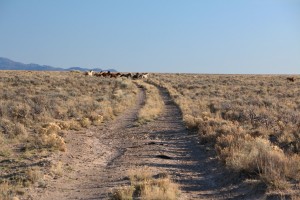 Twelve miles and four hours later (yes, four hours!!!) we finally got to the road as darkness fell. We quickly worked out that we had two options. 1) Flag down a lift to the nearest town which was 50 miles away in the wrong direction, or 2) Check out the ranch that I’d found on the map, as they might have a welder. We decided to go with option 2, and made our way up to the Ranch around 7 miles away with fingers crossed. 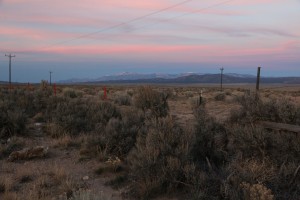 Things were looking up as not only did the ranch exist, but there were lights on, so we pulled up outside to try our luck. A guy called Steve came out to greet us, and confirmed that he did indeed have a welder that we were more than welcome to use. We decided that it would be best to do it in daylight in the morning, and asked if we could camp. Steve explained that the guy that owned the ranch wasn’t too keen on people, so suggested camping over the road, but offered to top up our water bottles before we did. He invited is in, and just as we’d taken our boots off he said ‘Would you like a shot of wine?’ We’re not big drinkers but we couldn’t say no after such a long day, so we gratefully accepted, and were further taken aback when his wife Stacy offered us dinner! We couldn’t believe it. 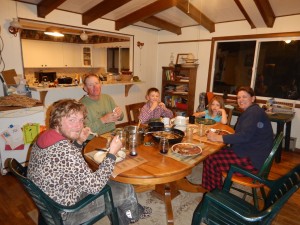 What such wonderful people to take in complete strangers who randomly turned up on their doorstep. We had a lovely evening with them and a delicious meal, and to top it all off they said that we could stay in the house on a mattress on the floor; it was music to my ears!