It was an early 6.30am start for us at the Ranch, as Steve was always up early and Stacey had already gone to do the 100 mile round trip to drop the kids off at school. Fortunately they only went 3 days a week, as Stacey was a teacher and she also home schooled them. 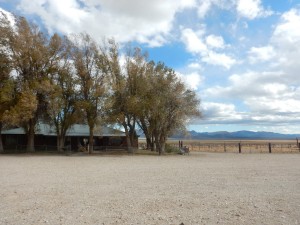 We had a lovely chat to them over breakfast of eggs, biscuits and gravy, then Ed cracked on with the welding while I did my exercises, and also went and helped Stacey bring in a horse. It was while chatting to Stacey that I discovered that Steve was an incredibly modest top class cowboy (can’t remember the word they actually use), as she proudly told me what her husband had done throughout his life. She said they’d always loved living in remote and out of the way places, and had only moved to look after the ranch fairly recently. They certainly looked like they loved the way of life out there, but even for a country bumpkin like me, 50 miles to the nearest shop was a little bit much.

In the daylight Ed surveyed the damage, and after removing the duck tape he discovered where it had snapped. 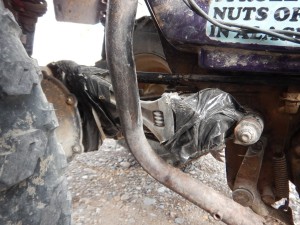 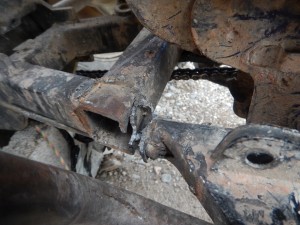 It took him a while in the cold and the wind, but Ed successfully managed to weld the swingarm back together, and was confident that it would last this time. I always admire how he can turn his hand to almost anything, and hoped that one day I’d be able to do the same. I can rebuild an engine now so that’s a good start, but having only had one welding lesson I thought it best to leave it to the ‘expert’ this time. 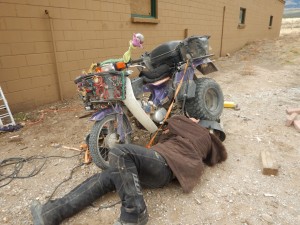 Steve and Stacey kindly gave us lunch of hot soup and cheese toasties, and looking out of the window at the rapidly changing weather I was incredibly thankful for it. Heavy low cloud had filled the sky, and I had an awful feeling we were about to get snowed on. 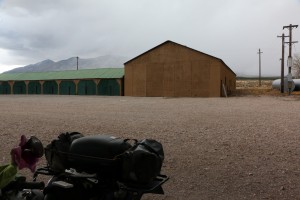 Really we should have stayed another night and gone in the morning, but with Ed keen to get moving and not wanting to outstay our welcome, we decided at 2.30pm that it was time to go. We said goodbye and a massive thank you to Steve and Stacey, before loading up the bikes and heading off. 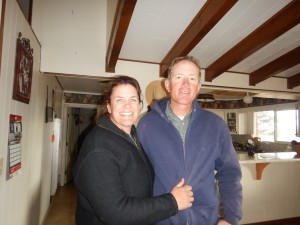 We should have seen it as a sign when we got outside and discovered that Ed had a flat tyre, but Ed just decided to put some slime and air in it and see how it went. 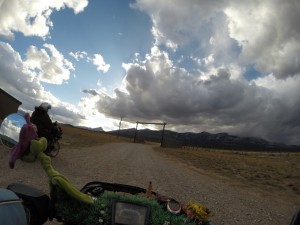 In case you were wondering, it went down, seven miles up the road just as we’d turned off for the first pass called Patterson Pass. By the time Ed had removed the tube, patched it up, tested it, discovered there were more holes, and put in the spare, it was 4.30pm by the time we were rolling again, and we knew we were in for another late one.

Most days I secretly hoped that it would be a relatively easy ride, but it never was, despite parts of the trail leading you to believe otherwise. The first pass for example, Patterson pass, was so easy that you didn’t even know that it was a pass. Ed said he hoped the other pass would be just as easy, but I had a horrible feeling that it wouldn’t be. We dropped down in to a basin, and quick fast gravel roads whisked us along towards the next lot of mountains. 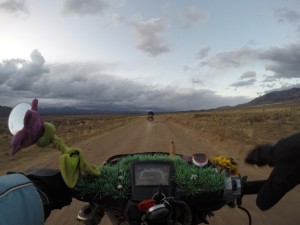 I looked at a small inviting mountain with the sun shining just behind it, desperately hoping that we were going over there, but of course we were heading towards the big dark snowy one, naturally. 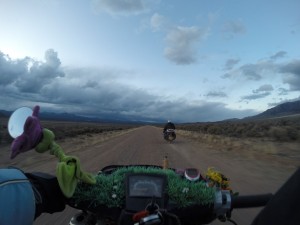 The light started to drop quite quickly, and snow appeared on the edges of the road, closing in on us until it was covered completely. The road soon became a narrower trail, and got worse as we climbed up the mountain, as it was now pitch black and had begun to snow. I really wasn’t enjoying myself, struggling to see in the dark due to my eyesight, and was very aware that I had fingers and toes. 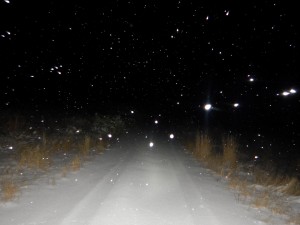 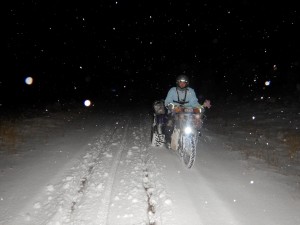 The problem I have is that once I have any fear in me my confidence goes, and I can’t get it back until I’m out of the situation. I’d become really stiff, and every slight camber freaked me out. I ended up having to ride in Ed’s tyre print, while he gave me a running commentary of what the terrain was like that I’d be riding over. 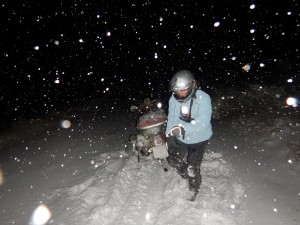 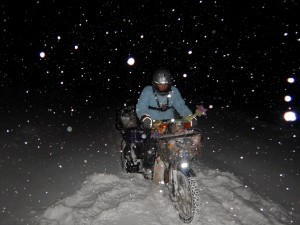 It was a very long ride, at least mentally, and seemed to go on forever. We finally got to the top with the snow easing off, but my ordeal wasn’t over just yet. Going down seemed even worse for me, as I was scared that I was going to lose control and go over the edge, despite having plenty of room to accommodate a slide or two. If I’d told Ed this, he would have pointed out that you can’t really lose control at 5mph. I tried to go faster but just found myself freaking out and getting all stiff. You’re possibly sat there thinking how dangerous this was, but if you heard it from Ed’s point of view you’d think it was a walk in the park. My experience of it will undoubtedly make it seem much worse than it probably was.

It got easier as we got lower down, with the trail widening out and the snow stopping completely. We rode past rocky outcrops and thick dense forest, before getting out on to a proper gravel road. It took us around two hours to get up and over the pass, and I was so happy (that’s an understatement) when we saw lights and signs of civilisation. We rode in to Lund to get fuel and food, which came in the form of a burger and potato tots. I’m really not a junk food eater, but when you’re cold and hungry anything goes. 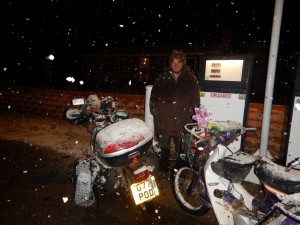 It had started snowing by the time we’d finished our food, and as there wasn’t a motel in Lund we rode on to Preston, where we got one of the last motel rooms plus a welcome free cup of roasting hot coffee. 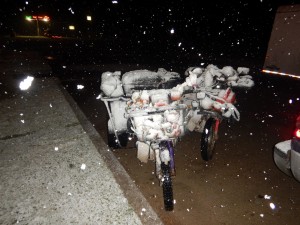 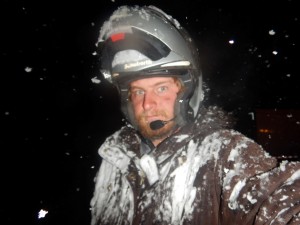 It was snowing quite heavily as we unloaded our bikes, and as I snuggled down in to the warm comfortable bed, I wondered what tomorrow would have in store for us.