Being Independence day, or Treason Day as Ed likes to call it, we thought that it would be fun to spend the night at a proper campsite with entertainment and fireworks. We stopped at a couple of campgrounds but no-one was willing to do us a deal, and after being spoken to quite rudely by the last one we decided that we didn’t fancy socialising after all and went in search of a wild camping spot instead. It took some time and a keen eye, but I eventually spotted a little track that went in to the woods. There we found a perfect spot by a river, and after cooking some dinner we celebrated finding a free camping spot with some sparklers that Ed had secretly bought from the store. 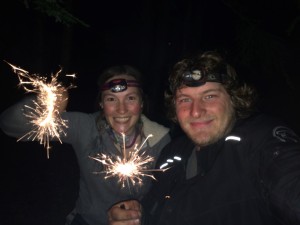 I was really pleased we’d ended up wild camping, sometimes you just can’t beat waking up with nothing but the sounds of nature, it was so peaceful. 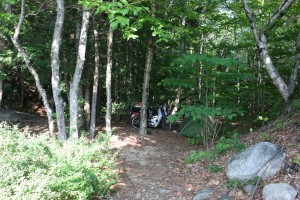 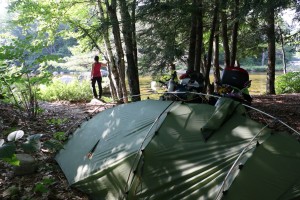 I hadn’t had the best of sleeps as I hadn’t put enough air in my Exped, but at least it got me up early. I was keen to get moving as I didn’t want to be leaving late in the afternoon again. We packed up and Ed put on some Elton John, and as we were quite happily packing up and having a dance and a singalong, three people drifted past in the river on inflatable tubes. I wondered at that point if they were aware that there were two British people in the woods dancing to Elton John. Probably not.

It was a really good day as far as riding goes. We hit the road at 10am and it was the perfect riding temperature when we were moving. I really loved the first road we went down, it was narrower than the ones we’d been riding on and was lined with thick, lush trees. 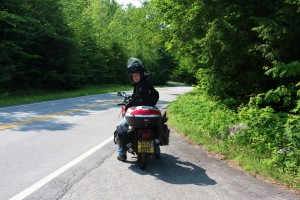 Despite being winding and slightly up hill, Ed’s bike was running surprisingly well, and we did a decent speed for the most part. There were some absolutely beautiful views out over the mountains too which were completely covered in trees, and Ed said they reminded him of Vietnam. 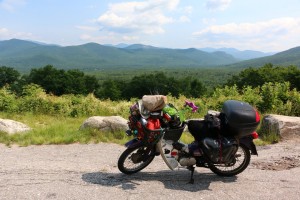 It wasn’t long before we turned on to the Kancamagus highway, which had been highly recommended to us. It was a nice enough road but I actually preferred the road before, but I still enjoyed it enough and there were some lovely views. 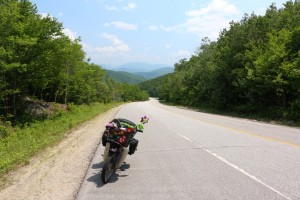 At one point I stopped and looked back and saw a beautiful view, and it was then that I wondered if it was better travelling in the other direction. Roads can be like that, good one way but fantastic the other. We had a bit of climbing to do on the highway but Ed’s bike managed it well, and soon we were whizzing our way back down. 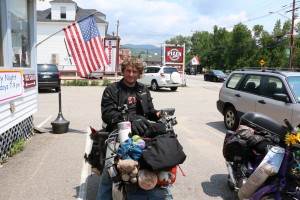 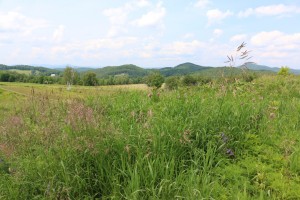 Needless to say I fell in love with Vermont instantly. It was so lush and green, the countryside was beautiful, and the roads and towns were so perfectly maintained. 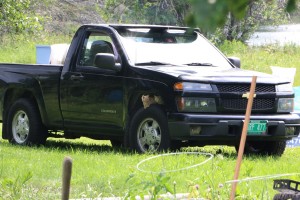 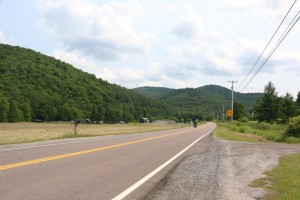 It’s the only place on the trip so far that I could seriously see myself living, and with the multitudes of trees it was easy to see why it’s one of the most desired places to visit in the fall. To me, Vermont was like the best countryside of England, except it has a hot sunny summer and a winter with snow so you can actually do stuff. The only downside is the winters are longer and they don’t have spring like we have in England, but you can’t have it all now can you? 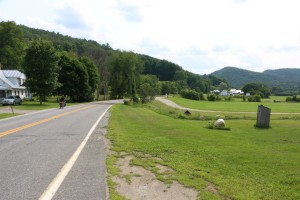 We headed west until we hit the 100, then took that south, occasionally coming off it to take backroads, country lanes and the odd dirt road. With hindsight we wished we’d done more dirt riding, but with Ed’s piston hanging on for dear life and with 5000 miles of off-roading coming up when we tackle the Trans-Am trail, we soon got over it. The road eventually took us alongside the Green Mountain National Forest, and after an afternoon of never ending tree covered hills and mountains, gorgeous countryside and fields of green grass, I felt like I’d overdosed on the colour green. I certainly got what I wished for all those months ago when we were crossing Canada in the winter. 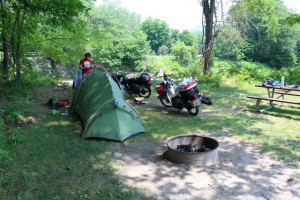 We decided to find a place to camp while it was still light, and although we’d intended to find a wild camping spot, we spotted a sign for a camping area and decided to follow it. It was $20 a night but having ridden quite a long way and with us both being rather tired we decided to go for it. We’d literally just put the tent up when Ed revealed some fireworks that he’d once again secretly purchased. He has a habit of doing that. The first was a little tank that was supposed to drive along while spitting out fireworks, but it only did the latter, and the second one was a Catherine wheel. Being the more sensible one I said ‘I don’t think you’re allowed to use them in a National Forest’, and he said ‘Don’t worry it doesn’t go bang!’ And he was right, it doesn’t go bang, it goes ‘WEEEEEEEEEEEEEE!!!!!!!’ horrendously loudly repeatedly over and over again until you’re dying of laughter and praying for it to stop.