I often look forward to breakfast (sad I know), it’s my favourite meal of the day, but I was looking forward to Friday’s breakfast even more than normal. That’s because the wonderful Marcelo had invited me to have breakfast at his restaurant in town, and after the culinary delights of yesterday, I was particularly excited about it. After packing my bike up and saying farewell to the folks at the hostel, I rode in to town to Casa Marcelo, where Marcelo was waiting for me with a smile. He introduced me to a couple of his friends who would be joining us, and the lady of the couple, Gilda, just so happened to speak excellent English. Although it was no accident that she was invited; Marcelo had exhausted his English and me my Spanish, so he’d decided that we could probably do with a little bit of help! I kind of missed the fun of trying to work out what each other was saying, but I have to admit it was useful being able to fully understand what was being said, and also ask questions about the conversation and the language. 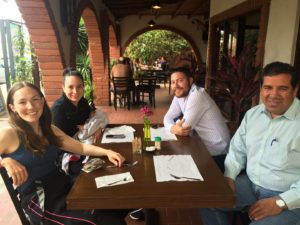 Before I sat down Marcelo gave me the menu to read, but there were so many choices I decided to go with his recommendation. I gathered that it involved a lot of food and lamb, and although I’d actually stopped eating meat towards the end of our trip across the states, and barely ate it in England and Spain when I went back for 4 months, upon returning to the states I’d decided to start eating it again. So lamb it was.

I stopped eating meat for ethical reasons, but as anyone who travels knows, when you’re on the road you can’t always be so picky. Quite a few times we were invited in to people’s homes and they’d cooked a meal for us with meat, and I could never find it in me to say no, that I couldn’t/wouldn’t eat it. So I decided to eat meat again, to open my options, and to be able to fully embrace the food and culture of the country and region I’m in. I don’t eat a lot of it, and given the choice I would much rather eat good wholesome vegetarian food, seafood, and ‘happy’, organic and free range meat. I’ll always choose that when I can, but wholesome nutritious vegetarian meals and meat that hits all that criteria can be hard to come by on the road. So for now I’ve come to accept that it’s a part of my life I can’t control at the moment, and to just get on with it and enjoy it.

Breakfast started with a coffee, before a bowl of fresh ricotta drizzled with a green olive mousse arrived at the table, along with some deliciously fresh bread. It was really good, but I held back more than usual, saving myself for the main event. And I’m pleased I did, because it was A LOT of food, at least for me. I’m a little and often kind of person when it comes to food, but when needed I can tackle bigger portions, especially when they taste as good as my breakfast did. At first I thought it was fat, but I soon discovered that some of the most tender lamb I’ve had in my life was covered in a think layer of cheese, which had been cooked in such a way that the outside was that lovely golden colour and delightfully crispy. Oh and just for the record, I love crispy bits! That was then topped with mushrooms, tomatoes and cubes of fresh cheese, before being topped with two perfectly cooked fried eggs. Food. Heaven. 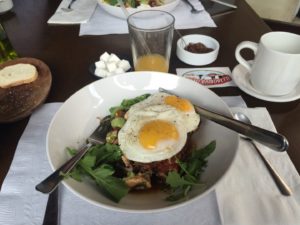 Thank you for your life little lamby, if it’s any consolation you were delicious.

Marcelo had the same as me and his appeared to disappear rather quickly, while I made a point of savouring every bite of mine. After all, I didn’t know when my next good meal would be! It has to be said though, for such a lovely top class place with delicious food, it was actually very affordable, not that Marcelo let me pay of course. He just laughed when I tried to, and gave me a ‘don’t be silly’ look and wave of the hand. Seeing the prices did give me hope that I could afford to treat myself to a lovely gourmet meal every now and again though, which just added to my current state of happiness and joy.

We had a lovely time chatting about all sorts of topics, along with where is safe to go and where isn’t. It wasn’t information that I asked for, but Gilda felt compelled to tell me. I’m no longer surprised to hear such information from Americans, but to hear it from Mexicans did surprise me. I am finding that I have ‘parents’ everywhere I go now, concerned about my safety. It’s good that people care, but on the other hand I’ve learnt that everyone is different, and one persons idea of danger is very different to another. That’s why accurate information is hard to come by. I know that there are dangerous areas in Mexico that should be avoided, like in every other country, but I also know that lots of people live in fear, oftentimes irrational, which is a sad and depressing product of the media and propaganda. Therefore I always listen and take on board information about the safety of the places that I’m going to, but I also take it with a pinch of salt. For example lots of women wouldn’t dream of travelling solo, and will even tell others that it is dangerous and shouldn’t be done, even though they’ve never done it themselves, and despite thousands of women traveling alone safely every year.

My advice would be to listen to what you are told but don’t take it as gospel, be informed, talk to other like-minded traveller’s who have actually been there recently, and be sure not to be put off by someone else’s fear. After all, had I listened to all the advice that I was given in America, I wouldn’t be here having a great time in Mexico! 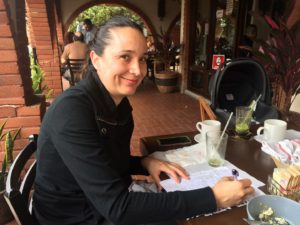 After I finally finished my food, Gilda ended up giving me a Spanish lesson which was very much appreciated. I’m learning Spanish using a programme on my laptop and CD’s on my iphone, but having a real native Spanish speaker to talk to and ask questions was extremely helpful. I’d already decided to stop in Guatemala when I get there and do some immersive Spanish lessons (it’s cheaper than in Mexico), and my little lesson with Gilda not only made me want to do it even more, but also made me realise just how useful it is if they also speak English!

After polishing off a freshly squeezed orange juice, that had so much flavour it made me question just what it is that they do to that anaemic crap that they sell in the shops, Marcelo said that he wanted to take me to see the old Hotel Riviera del Pacífico. Time was getting on but I’d already decided that I had all the time in the world for Marcelo, so we jumped in his car and took the short drive down there. 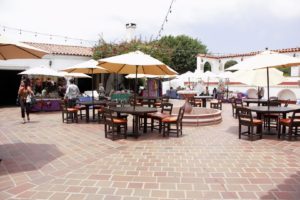 Small square and market at the old hotel

What is now the Social, Civic and Cultural Center of Ensenada, used to be one of the most prestigious and luxurious hotels in Mexico. It also claims to be the birth place of the Margarita cocktail, although many reports deem otherwise. The bar was open but I don’t drink anymore, plus I was going to be riding, so I can’t tell you if the Margarita’s were any good! 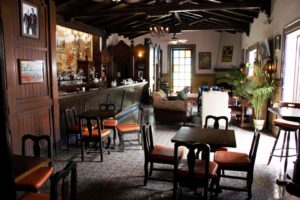 The hotel opened with great fanfare in 1930, but was not a real success until the early 1950’s. It finally closed in 1964, before being re-opened in the late 70’s as the Social, Civic and Cultural Center of Ensenada. It has quite an interesting history, but to save me from quoting more of Wikipedia, more information can be found here… 😉 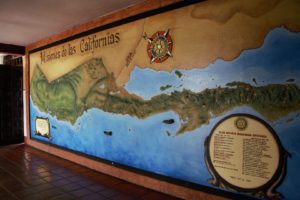 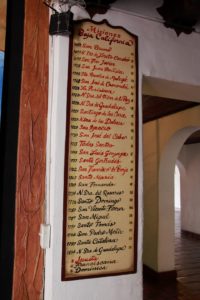 After a good wander round and a visit to the small museum, we made our way back to the restaurant, where I was reunited with my trusty steed. I’d had a lovely morning and really couldn’t thank Marcelo enough for his kindness and hospitality, it was a real pleasure. We said our goodbye’s, and he said that when I get close to San Miguel de Allende, his favourite city on the mainland, to drop him an email and he will come and meet me for a gastronomic tour. ‘We will eat!’ he said. ‘A lot!’ We both smiled at that. You see Marcelo ships his cheese to all the best restaurants in the country, so he’s the man in the know when it comes to the best places to eat. That’s why over breakfast he’d been busy writing down all the places I should stop on my way down the Baja 🙂 And with that list safely tucked away in my pocket, I waved farewell to my newfound friend, and shouted ‘hasta luego!’ as I rode off, which basically means ‘until then’ or ‘until next time’ in Spanish. And until the next time, I will be busy learning Spanish and keeping fit, so that when we meet again in San Miguel de Allende, I will be able to speak Spanish and eat fine food to my hearts content. Here’s to next time! 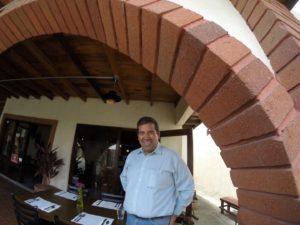 8 thoughts on “Breakfast, my favourite meal of the day”