After five nights in La Paz, I decided it was time to leave and explore the very southern portion of the peninsula. My first destination was Todos Santos, which was only 80km’s away on a main road. Knowing that I didn’t have far to go I didn’t leave until later in the afternoon, but after needing to drop some things off at Ed’s new accommodation, which I couldn’t find for ages despite being given the coordinates (I’m a girl, what the f*ck am I supposed to do with coordinates?!) I ended leaving in a very hot and bothered sticky mess. It took a little while to lose all the tension that had built up, but soon I was relaxed and enjoying myself, and was incredibly thankful when the temperature dropped.

I arrived in Todos Santos around 6pm, and being around feeding time I consulted trip advisor for a place to eat. I found a place that sounded good, but as I pulled up outside I discovered that it had just closed. Thankfully a friendly local over the road spotted the look of disappointment on my face, and not only told me about another great place I could try, but called them up to say I was on my way and could they please make me something. It was so kind of him, and them, as it looked like they were making their own dinner before closing up. 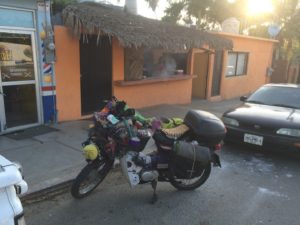 The rather discreet taco joint

If I hadn’t been told about it from a local, I almost certainly wouldn’t have spotted it on my own, mainly because it didn’t even have a sign on the front saying that it was a restaurant. I went inside and they asked me how many I wanted, and having no idea what it was I was getting or how big they were, I went for the safe option of three. Five minutes later and three of the most delicious meat tacos turned up, which I promptly smothered in all the different toppings that were on offer. They were so good and really hit the spot, and the owners and workers were really friendly, with the owner waving me off as I went in search of somewhere to stay. 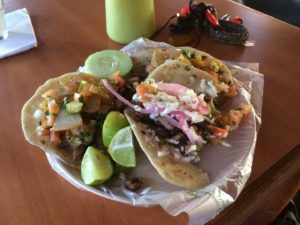 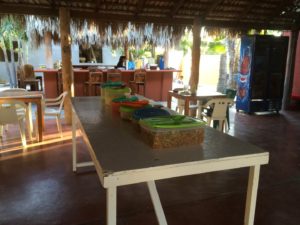 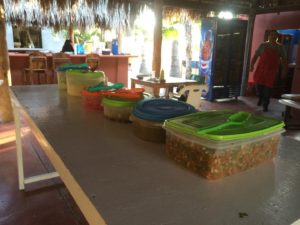 So many toppings, including some deliciously soft and sweet caramelised onions.

I did a few laps of the town and thought that it would be nice to stay in the centre for a night or two and have an explore on foot the following day, but after asking around at several hotels, it quickly became apparent that I couldn’t afford to stay there. It was obviously aimed at American tourists, not budget motorcycle travellers. After the 4th hotel I gave up, and started looking at camping options. I’d heard about some free camping slightly north, but as it was going to start getting dark soon and I didn’t know if the free camping actually existed, I decided to ride south 14 kilometres to the El Pescadero Surf Camp. I expected to arrive and find lots of people there, but I pulled in to find the place deserted. ‘Of course, it’s off-season!’ I remembered. 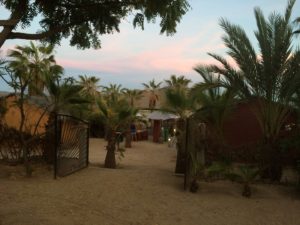 I had a wander round and soon found a couple cooking in the outdoor kitchen, so asked the guy where the reception was in Spanish and got a very fast response back in Spanish. The confused and puzzled look on my face prompted him to ask if I spoke English, and after I said yes, I discovered that they were also both from England. I never would have known, his Spanish to me sounded perfect! It turned out that they’d been living in Mexico city for quite a while as the guy had a job there, but they were now on a road trip north to go and live in Canada for a year. They said that no-one else was there and that the maintenance guy comes round in the morning for the money, so I decided to foot the $10 it cost to camp there and stay the night. And after a very welcome and enjoyable swim in the pool while chatting to the couple as they had their dinner (sorry I can’t remember their names!) I happily hit the sack and tried to get some sleep. 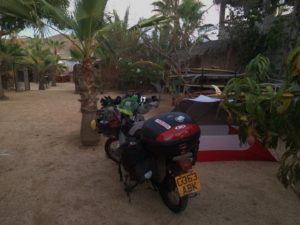 My room for the night