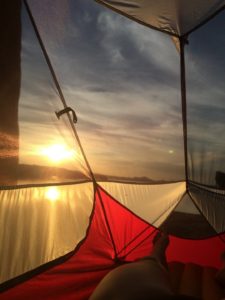 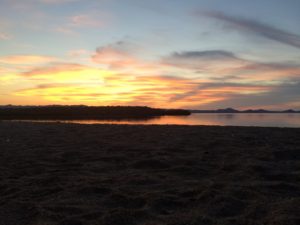 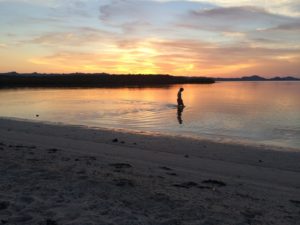 We woke early in the morning to a gorgeous sunrise, and thoroughly enjoyed the peace and quiet that comes with being in such a tranquil location. Well that was until our distant neighbours, nicknamed Armin Van Fuckface by Ed, decided to whack their shitty dance music up full blast while they packed up their things. I’ve definitely noticed here that people seem to have a complete lack of respect and consideration for others, especially when it comes to playing music loudly. I wouldn’t dream of doing that, I’m far too aware and considerate of others; I’d be embarrassed. Thankfully they eventually left, along with their shitty music, and we got to enjoy some peace and quiet again. 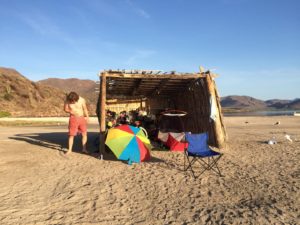 Despite being a beautiful location, it was far too hot to hang around at the beach all day, and apart from swimming in the sea there was very little to do. Ed left around ten minutes before me, and I followed shortly behind, unsure as to where my destination was going to be that day. 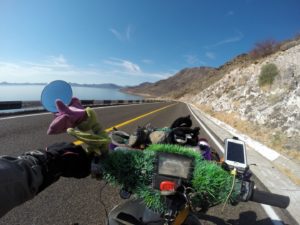 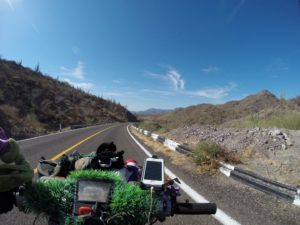 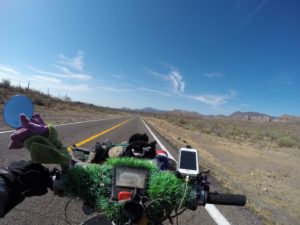 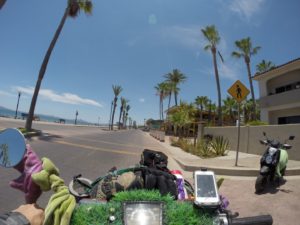 It wasn’t long before I arrived in the town of Loreto, which is a beautiful little town on the coast. I rode through the back streets at first and made my way to the seafront, in search of a place for breakfast. 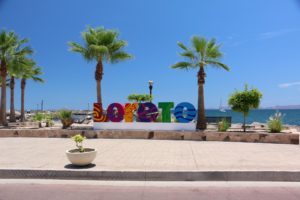 After riding the full length of the malecon I spotted a lovely looking cafe right on the front, and as I pulled in I started laughing, as I spotted Ed’s bike. Great minds think alike! He was sat in the shade with a cold drink, and happily pointed out that he was always there first. The thing is when there is only one main road, and the towns usually have one main area which is attractive, you’re bound to keep bumping in to each other! 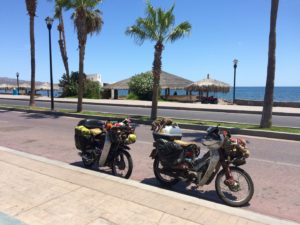 I had a delicious breakfast with a very welcome glass of freshly squeezed orange juice, but I was in a bit of a quandary as to what to do. Part of me wanted to stay overnight in Loreto and have a little explore, but as is often the case with beautiful towns, it was very expensive and out of my budget. After bidding farewell to Ed again I rode in to the centre, to see what the town had to offer. It was certainly lovely and looked like a good place to stay, but taking in to account that it was expensive and early in the day, I decided to push on and get some more miles under my belt. 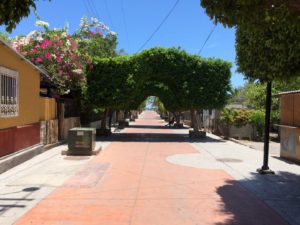 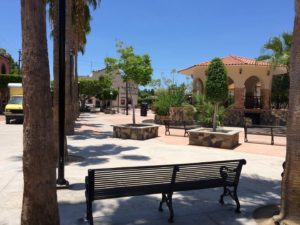 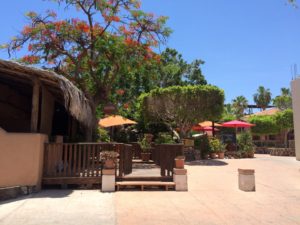 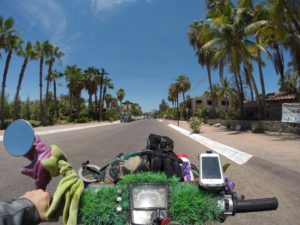 After leaving the Bay of Conception and heading inland, it got brutally hot, and even climbing up in to the mountains offered very little respite from the heat. 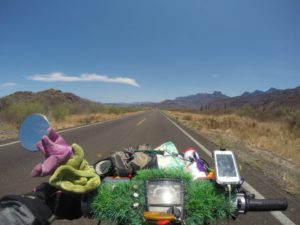 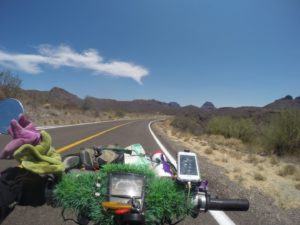 Again I was left desperately trying not to fall asleep, and on one occasion I felt like I was having an out of body experience as I rounded a corner, which scared me as I felt like I was going to pass out. Thankfully it was enough of a scare to wake me up, and the feeling passed as quickly as it had arrived. I’d been on full throttle for most of the journey, and before I knew it I’d come down from the mountains and on to a ridiculously straight road which took me all the way in to Ciudad Constitucion, where I decided to stop for the day. 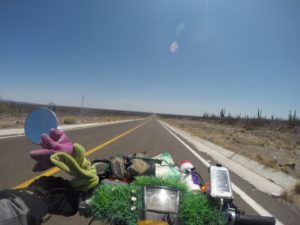 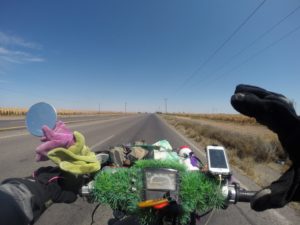 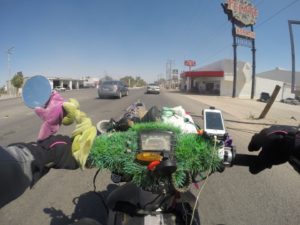 It was on my way to Ciudad Constitucion that I became aware that I was getting an addiction to swimming pools, as I’d been fantasising about getting in to one for at least the last two hours. It was still horrendously hot when I pulled in to a hotel advertising a pool, and when the lady told me that it was $500 for a night, no haggling, my heart sank. I said I didn’t have enough money and needed to think about it, to which she replied ‘It has a swimming pool!’ ‘Dammit, she knows my weakness!!’ I thought, dripping with sweat and obviously in need of a good dunk in their twinkling crystal clear water. 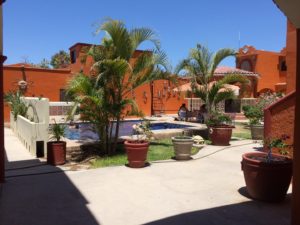 I decided to message Ed to see if he’d make it here and be able to share the cost with me, but after no reply I decided that it was another completely justifiable ‘sod the budget’ moment, and went ahead and took the room (and yes, it was more expensive than a hotel I’d found in Loreto!) But oh my goodness that first swim in the pool was amazing! Feeling the cool water against my skin after spending the last few hours hot, sweaty and sticky was borderline orgasmic, and for me worth every single cent. 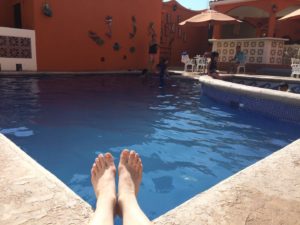 The air conditioning in the room was glorious too, but it all came with a side order of guilt when I finally got a reply from Ed. I thought that he must have been ahead of me, but it turned out that while I was sat there with my cold bottle of water and feet dangling in the pool, he was miles back slumped on the side of the road unable to continue as he was in danger of falling asleep. And although I felt guilty, I still found it in me to let him know how amazing the pool and air conditioning was! Thankfully he summoned up the energy to continue, and an hour and a half later he arrived, exhausted and de-hydrated. Of course the best thing for de-hydration is an ice cold beer, and after sinking that he had a well deserved dip in the pool, thankful that he’d made it and wasn’t still slumped on the side of the road.