We left Rob’s fairly early, headed for Kenora. We’d avoided the Trans-Canada all the way so far, but after looking at the alternative route, which would have been more scenic yet had more dangerous corners and considerably less traffic if we needed assistance, we decided to get on it from Winnipeg. We would be forced on to it in 90 miles anyway, once we entered northern Ontario, as there are no other paved roads to choose from.

It was overcast as we set off, and about twenty miles in to the journey we reached somewhat of a milestone; the longitudinal centre of Canada. Of course we had to pull over for a photo next to the sign, and buried our bikes up to the axles in snow. It was a glass half full, glass half empty moment. Yes, we were halfway across Canada, but it also meant that we still had the other half of the country to get across. Let’s be honest, it’s a long way. 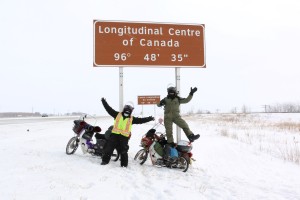 I was having similar mixed emotions about my new windscreen. Yes it was keeping the wind off my body, so it would in theory keep me warmer, but the wind had to go somewhere, and in this instance it was directly at my head. It wasn’t buffering my helmet (ooh er missus), but it was noticeably louder, which is something that concerned me being a sufferer of Tinnitus, acquired in my younger days from too much loud music. I decided to persevere though, and give it a chance before completely disregarding it. 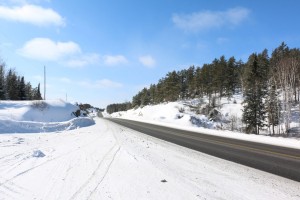 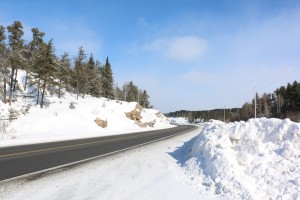 The road wasn’t anywhere near as busy as we thought it would be, and flat plains were soon replaced with hills and trees, dominating the landscape. The temperature was hovering around a balmy -8C, and as the cloud gave way to beautiful blue sky, it became a particularly pleasant day for a ride. After stopping at a fuel station for some lunch, the road changed from a four lane divided highway to a two lane one, and we eventually crossed the border in to Ontario. It was as we approached Ontario that the rock cuts started. 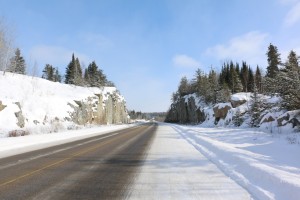 Large rock faces lined the road intermittently, all scored with vertical lines where rods of dynamite had been placed to blast it out. 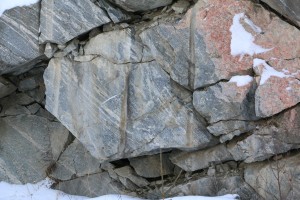 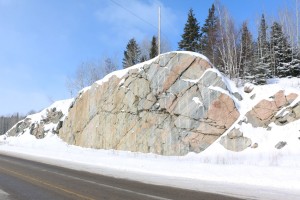 This welcomed change of scenery is known as The Canadian Shield, which includes some of the oldest rocks on earth, possibly more than four billion years old. Geologists understand the Shield to be made up of pieces of the Earth’s crust, which through the process of plate tectonics, began colliding together more than 3 billion years ago. Repeated advances of glacial ice have scoured its surface and left it strewn with countless lakes, rivers, streams and ponds.

Shortly after we’d crossed in to Ontario, we saw a familiar view in our mirrors; police car and flashing lights. ‘Really?! Again!’ We pulled over, and the policeman got out of his car. Apparently he’d had a call from a concerned member of the public that there were mopeds on the highway doing 50kph. Firstly they’re not mopeds, secondly we were doing 60kph, and thirdly it’s not illegal. Of course we understood that he had to follow up the call, and it was the first time a member of law enforcement had asked to see our driving licences and insurance. We handed over both, he filled in some paperwork, and we had a chat. ‘Do you think what you’re doing is safe?’ he asked. ‘Yes’, we replied. We had studded tyres, lights, I was wearing a high-vis vest, visibility was perfect, the roads were completely free of ice, and we often pulled over to let traffic past. We were doing our utmost to be safe. ‘I don’t necessarily think it’s safe what you’re doing’, he said, ‘but I can’t stop you from doing it. And you’re not going to stop are you?’ To which of course we replied ‘No’. 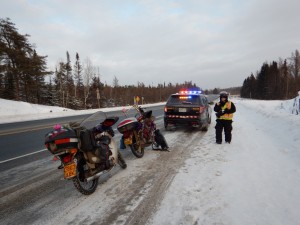 It annoyed us that someone had called the police on us. What is it to them? They should mind their own business and worry about what they’re doing, instead of calling the police on people because they’re doing something different, and not what they would consider ‘normal’. I would like to point out that bicycles are allowed on that section of the Trans-Canada highway, as there are no other paved roads, and they go at a considerably slower speed than we do. Oh and not forgetting farm machinery and Amish Mennonite vehicles, they also go on the highway, would they call the police on them too? 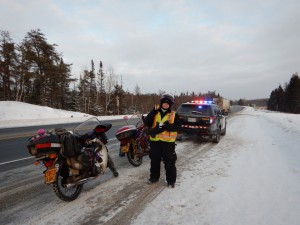 Rather ironically, due to us being pulled over, we were forced to ride to our destination in the dark, and it started snowing. A non-dangerous situation was made potentially dangerous. Well done to whoever called us in; you tool.

Before the policeman left, he asked us where we were staying and who with, and it just so happened that he knew our host. We were staying with a guy called Dan, a friend of Iain who gave us a lift to Jasper, and we later discovered that the policeman knew Dan because Dan was the former Chief of Police. The policeman had even contacted Dan on Facebook to let him know that his guests were on their way. I thought that was quite funny.

Dan also found it quite amusing, and didn’t agree with the person who had called us in, being a biker himself. After venting our frustrations about certain members of the public, we spent a very enjoyable evening chatting, and Dan very kindly made us a delicious stew, which we washed down with some ice cold beer and more interesting conversation. 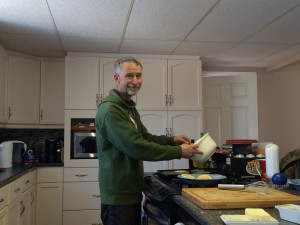 After a delicious breakfast of pancakes and maple syrup, we said goodbye to Dan before hitting the road. It was a bright sunny day, with the highway taking us through rock cuts, forests, and past frozen lakes. By the time we’d done around 60 miles I was pretty chilled. I can’t remember what the temperature was but I know it must have been fairly cold; it took a long time for my toes to thaw out when we stopped for lunch. We spotted a restaurant called Busters Barbecue as we approached Vermilion Bay, and being cold and hungry we didn’t hesitate in pulling in. There was a long line of snowmobiles parked outside, so we happily positioned our bikes in amongst them, wondering if anyone would notice the odd ones out. 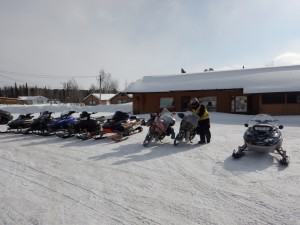 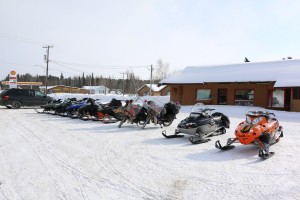 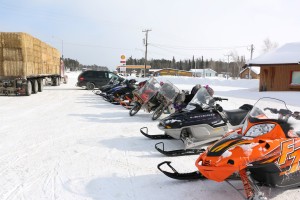 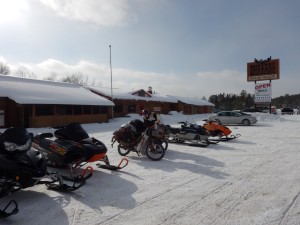 We’d just finished our meal when a big table got up to leave, and a couple stopped by our table for a chat. We soon found out that they were called Dwight and Kylie, were brother and sister, and that they’d been out snowmobiling for the day with their friends and family. After a short conversation about our trip, Kylie very kindly invited us to stay at her house in Dryden. With the lure of cold beer, a jacuzzi, and good company, it wasn’t hard to accept her offer. They then gave us their phone number’s and address, and said they’d be back in an hour and we could turn up whenever we liked.

I was desperate to do some exercise, so decided that we’d go to the gym beforehand. It was only 30 miles to Dryden, but it seemed to take an awfully long time. By the time we’d finished in the gym it was dark, but with Kylie’s house only a mile or so away, it wasn’t an issue. The issue however came in the form of our bikes not wanting to start. It was -23C, and neither of them would start, strongly suggesting that the culprit was the cold; either that or there had been a very unfortunate coincidence and our bikes had developed separate faults at exactly the same time. The latter seemed extremely unlikely, however having successfully started them in -26C before, it did make us wonder. With cold ultimately being the problem, it was simply a case of warming them up. We tried for some time to kick them over, with the oil getting noticeably thinner with every kick, but there was barely any life coming out of them, if any.

There was only one thing for it; to get the stove out and physically apply heat to them. We started with the stove under Ed’s engine, trying to warm the oil up. We got a few coughs and splutters out of his bike, but it wasn’t enough to get it going. After some thought we wondered if it was to do with the air being taken in, maybe it was just too cold for the spark to ignite the fuel. We subsequently put the stove under the air inlet, and within a matter of minutes and equally as many kicks, his bike eventually started. Mine seemed to take a bit longer, but that was mainly because I’m useless at kicking it over in my big snowmobile boots. 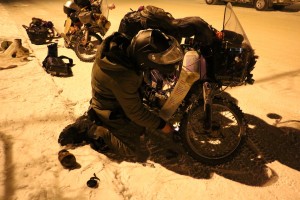 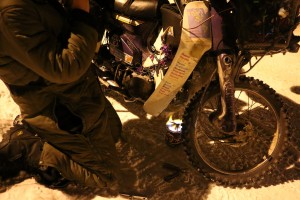 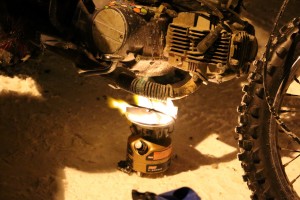 We decided to swap roles, putting me in charge of the stove and Ed in charge of the kicking, and despite melting my leg shields, the operation was successful, with my bike thankfully bursting in to life. 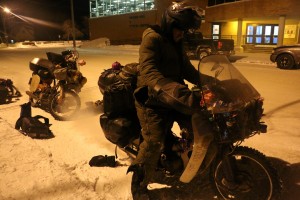 During this time we’d had a few curious passers by. One guy worked in the fitness centre, and kindly offered us the use of the lobby to warm the bikes up. Another guy asked if we were OK then offered us some money. He literally said, ‘Do you want some money?’ Of course we’d have loved some money, but saying yes to that question then being given some money just didn’t seem right.

We eventually got to Kylie’s house around 9.30pm, much to their surprise. They didn’t think we were coming as it was so late, but they seemed pleased that we did. We met Kylie’s husband Ernie, and Dwight’s wife Cindra, along with around twenty of their friends. Needless to say, after struggling with the bikes for over an hour, the beer went down incredibly well, and we stayed up chatting for a few hours before our eyelids got the better of us.

2 thoughts on “Winnipeg to Dryden”