After battling my way through the traffic, I got out in to the open and made my way to Ensenada, my first stop south. I took a wrong turn at one point and ended up at a shopping complex, so took the opportunity to get a Mexican SIM card so I could find a place to stay that night. The girl couldn’t speak much English at the phone shop, but with my limited Spanish and a pen and paper we worked it out between us. For $15US I got more than enough data to last me a month, compared to $45US in the states! Yet another reason why I love it here; it’ so cheap! I have to say that I was quite surprised that people don’t appear to speak much English here, unless of course they do and they’re just saying that they don’t. Either way it’s great for me as I really want to learn Spanish, and people speaking English to me isn’t going to help!

I’d been told to take the toll road to Ensenada, and seeing that it was also labelled as ‘The Scenic Route’ I took the advice, paid the incredibly small fee, and started making my way down the coast. Well it wasn’t long before I was wishing that I was on the other ‘libre’ or ‘free’ road, which basically ran parallel to the one I was on. It was slower, had far more to look at, and definitely had more bends! Needless to say that I spent most of my time gazing longingly at the other road, wishing that I was on that one instead of on the toll road, which quite frankly was rather boring. Sure there are some lovely views, but I’d much rather enjoy such views at a slower pace. It got better once the free road crossed under and inland, and the toll road hugged the coast, offering places to stop and better views. I pulled over at a beach and saw that lots of people were out enjoying themselves, having picnics out of the back of their cars, and playing on the beach and even braving the sea. 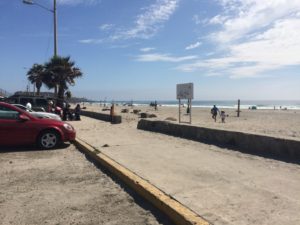 I rolled in to town around 4.30pm, and made my way to the hostel I’d booked for the night. Not only was it a bargain at $12US a night for a dorm bed, but I ended up with a room all to myself, plus the bike was locked away in their compound. The one thing I hate doing is leaving my bike unattended, and knowing that it was safe and secure meant I could completely relax and not worry about it. And that I did! I ended up staying for a total of four nights at the Hostal Todos Santos. It was a great base and I felt that I needed some time to myself before heading south. The owner Jorge was lovely, and soon directed me down the road for some incredibly tasty fish tacos. They were so good and only $12 pesos each, which is about 65 cents!! 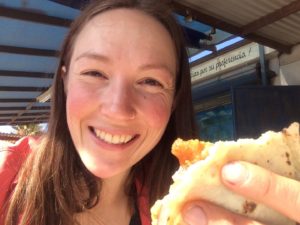 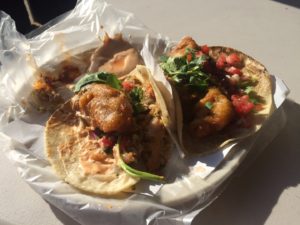 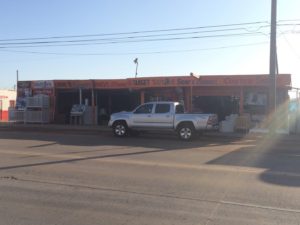 So the department stores have made it over here… sort of ;)

Needless to say that I went back the following day to get my fill. I do still need to get used to the prices and money here. I picked up some fruit one day on the way back to the hostel, and as the lady rang it up I thought ‘wow that’s expensive!’ only to check my phone afterwards and discover that 8 big pieces of fruit was a little over $2US! I couldn’t believe it. I wonder if I’ll ever get over how cheap it is here, there’s hope for my budget yet! 🙂

Apart from hanging out, working out, and learning Spanish, I went for a little explore round down-town Ensenada. It was quite an experience, and a much further walk than I anticipated! I love walking but trudging around in the heat really isn’t much fun, and I was wilting by the time I got down-town. My walk started at the beach, where people were enjoying themselves, playing, swimming and drinking beer under the shade of palapas. There were also lots of people trying to make a living, be it playing the guitar, selling cold drinks and ice cream, and renting horses for rides. 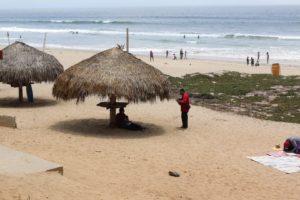 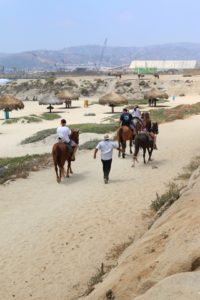 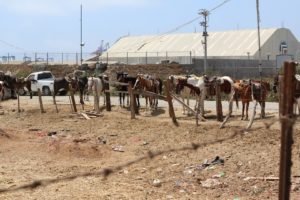 From there it got quite dirty, and I noticed just how much rubbish was strewn all over the place. It’s sad that people don’t look after where they live, but it seems quite common here. Thankfully it changed as I continued, and quite significantly. Before I knew it I was in another world, as after passing a church with beautiful gardens, the street was suddenly lined with trees, stores, cafes and ice cream parlours. It was quiet, calm and tidy, and just my kind of place. 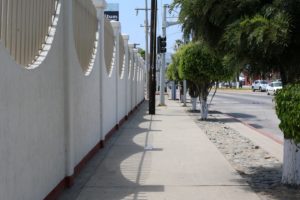 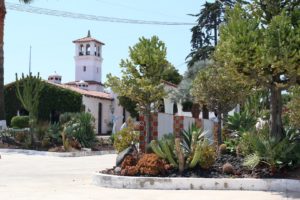 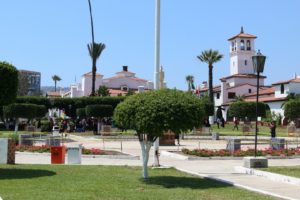 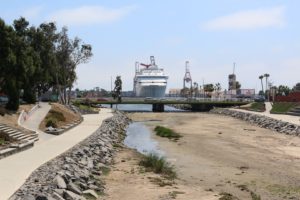 Ensenada is a port town, where many Cruise ships stop over 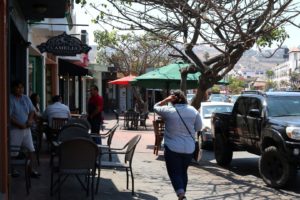 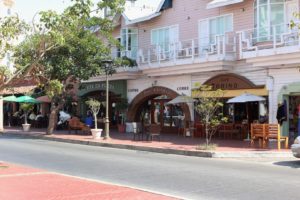 Noting down a cafe that looked particularly inviting, I carried on in search of an ATM, where I walked into yet another world. 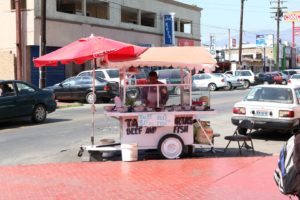 There are food stands and restaurants everywhere, which is great! 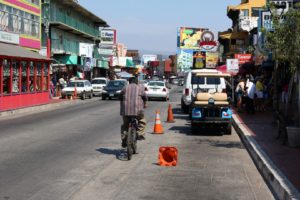 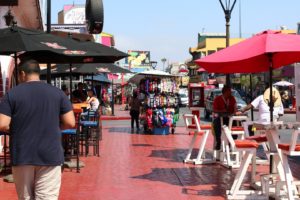 It wasn’t too bad at first, but soon the street became busier and more touristy, and quickly turned in to my idea of hell. The paths were rammed with tourist tat (crap), and store holders were shouting out to me in English to come and try their tequila, or buy whatever crap they had on offer. They got quite a shock when I replied in Spanish, and most engaged in conversation about where I was from and what I was doing there. It was certainly an experience but it definitely wasn’t for me, so rather overwhelmed I got some money out and quickly made my way back to the cafe. 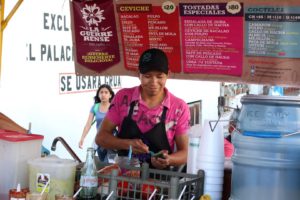 I didn’t make it back without getting distracted though, as my stomach started rumbling and I spotted a busy food stall on a street corner. There I had some really delicious ceviche mixta (fish, octopus, clams and prawns) that was served with salsa, onion, coriander and avocado on a hard flat taco. They were only $20 pesos each so I thought it was rude if I didn’t have another one! So good. 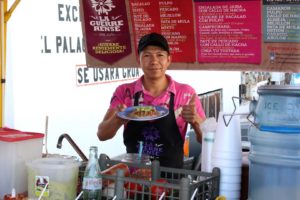 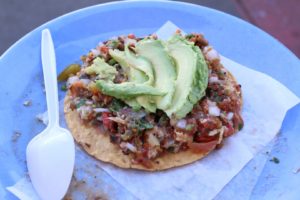 After that it was back to the cafe to write my blog, drink some coffee, relax and enjoy the peace and quiet. Although that didn’t happen for the first ten minutes, as some guy decided to take it upon himself to serenade an American couple sat outside with his guitar. It was a bit much, but he did do a rather good rendition of Credence Clearwater Revival which was appreciated on my part. 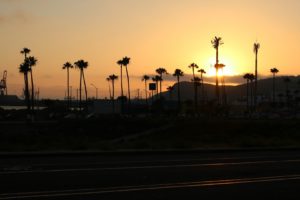