Port Orford, OR to Klamath Falls, OR

We couldn’t have asked for better weather when we finally woke in the morning. High in the bright blue sky sat a deliciously warm sun, and we got a real surprise when we stepped out of the motel and realised just how toasty it was. ‘This is more like it!’ I said to Ed, thinking that I could get used to this sort of weather (After winter in Canada and winter on the TAT I’m rapidly becoming a fair weather rider!) It was a world away from what we’d ridden through the past few weeks, and I couldn’t believe that we’d actually finally made it. 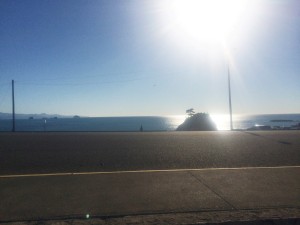 Along with daydreaming about warm motel rooms, for quite some time I’d also been daydreaming about eating fish and chips on a bench by the ocean, so for a late breakfast we went off to the fish and chip shop. I’d love to say that I wasn’t disappointed, but it was crap. Flavourless fish and rubbish chips, with some sort of white gloop parading as tartar sauce; suddenly the microwave meal from the night before didn’t seem so bad. 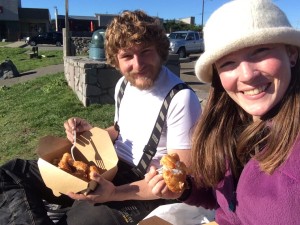 With that out of the way and the majority of it fed to the more appreciative local wildlife, it was time to ride down on to the beach, but of course that didn’t go smoothly either. Ed rode in front with me behind, but I took the wrong line and ended up on an awkward camber, too scared to correct it as there was a bit of an audience on the deck of a nearby restaurant. A guy from the local paper pulled over to see if I was OK, and feeling like a bit of a tit I told a little white lie and said that I was just waiting to get some footage, the truth being that after crossing the entire country I’d been beaten by the last short slope down to the finish line. After telling him about the trip he conducted a little interview with me as I held my brakes on solidly, before Ed came up to rescue me. He got it down the tricky bit and let me ride over the logs and on to the beach, something that I really wanted and needed to do myself. 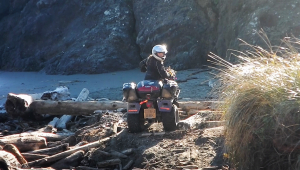 It seemed significant in a way, that he helped me on that last stretch, as he’d been such a huge help a lot of times during our Trans-America trip; I literally couldn’t have done the TAT without him. 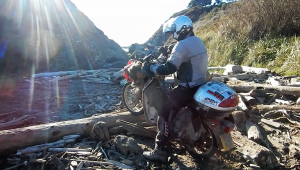 And with that we both rode on to the sand, dipped our toes and tyres in to the ocean, and breathed a massive sigh of relief. We’d done it, we’d made it to Port Orford and completed the Trans-America Trail, against all odds. 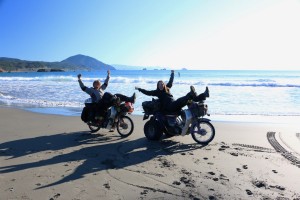 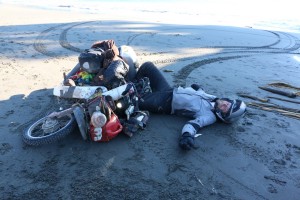 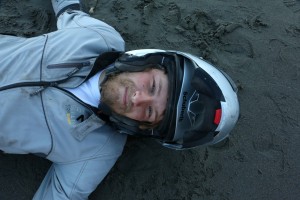 THE END (sort of)

Despite finally making it to Port Orford we couldn’t just ride south as we had to get the truck back to Ken’s, so our relief of finishing the trail was short-lived as we had to retrace our tyre revolutions back to Klamath Falls that afternoon. We took more paved road when we were able, but most of the route was what we’d already ridden, with the same cold and snow and long never ending miles. Thankfully my chain didn’t snap again, but my front axle decided that it didn’t want to be in my front wheel anymore and kept trying to escape. However tightly we did the nut up it would vibrate off and the axle would start working its way out, which I would notice as the trike would slow down as the wonky wheel rubbed on the front fender. My poor trike definitely wasn’t happy, but thankfully it got me back to Glendale and the truck, where I was incredibly grateful for the heater. We amazingly made it back to Klamath Falls without any trouble, and were both very glad to be able to say that the mission was complete; and what a mission it was!

We had a rough idea of what to expect before we started the trail, but we never could have imagined that it would be anything like it was. Over the course of three months we’d travelled through 9 states, experienced all four seasons with temperatures ranging between -10C and +40C, ridden on tarmac, gravel, sand, silt, mud, dust, dirt and snow, through forests and deserts and never ending fields, over high mountain passes and rocky ravines, nursed a back injury, built a trike, ridden said trike nearly 2000 miles off-road, and defied everyone that told us that it couldn’t be done.

I think it’s safe to say that our TAT experience was very different from other’s who have taken on the challenge, and we certainly made it our own. But that’s the beauty of the TAT, no two experiences are the same. Despite travelling along roughly the same route as everyone else, you can have a unique adventure that’s all your own. Who you are, what you ride, who you ride with, when you set off, and what life throws at you along the way all determine what your adventure will become, and I think that we’ve proved that it can be worlds apart from anything you’ve already seen and read about. So what are you waiting for? Get out there and see what the Trans-America Trail has in store for you, you might just be surprised!

A big thank you to all of you for following along and for all your wonderful and entertaining comments, I really enjoyed reading them and I’m sorry I was so useless at replying. Hopefully after seeing how busy we were I can be forgiven 😉

And finally a massive great big thank you goes to Sam Correro for making all of this possible by creating the Trans-America Trail for us all to enjoy; it’s been one hell of a ride!