It was by far the hottest day so far. There was no respite from the heat even when we were moving, as the breeze was like a hair dryer on high being blasted on our faces. I also didn’t get any refreshment from drinking water, as it was hot enough to brew tea. 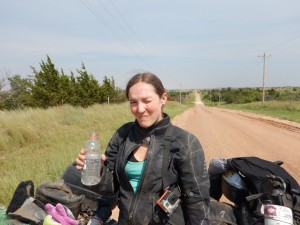 The day started off with gravel and dirt, but it soon turned in to mud, which fortunately for us was baked and dry. 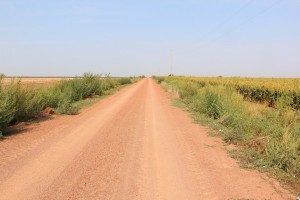 It was still quite tricky to ride on as there were deep gouges and gullies where people had driven through it when it was wet, and I was instantly thankful that we hadn’t had any rain. 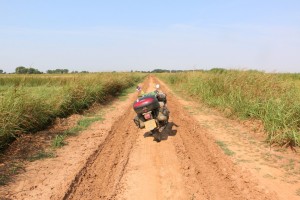 I must say though that we both thought that it would have been an interesting challenge had it been wet, but in the intense heat the novelty would have worn off VERY quickly. It would no doubt be absolutely horrendous in the wet, and would be slow going on foot, let alone on a low powered motorcycle. 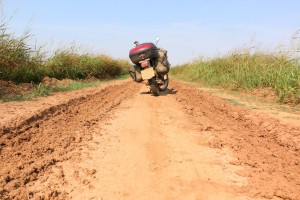 It was pretty remote where we were, but we eventually reached a town that had an unmanned fuel station and a small rural cafe. We were both rather hungry and thankful when we discovered that they were serving food, and went in and sat down with all the local workers that ate in there. I soon became confused though when a lady who worked there came over and said ‘Hello, would you like a large or small?’ ‘A large or a small what?’ I replied. ‘A large or small dinner’, she replied, ‘the only thing we do’. You know you’re in a rural location when the only cafe sells one type of meal in two different sizes! That day it was roast beef with mash and beans, which was impressively bland but being hungry and having no other option we were just happy that we had anything at all. We also got some apple pie, but as it had arrived on the same plate as the dinner it was a bit on the cold side and swimming in what I think was gravy, but I can’t be too sure. It was only $7 though, and we got to meet some really lovely locals who had helped bikers in the past with the horrendous mud. I found out that the mud is called gumbo mud, and when it’s wet it sticks like shit to a blanket. It will build up on your tyres until they won’t go round anymore, and if you try to walk the bike the same will happen to your boots.

Lucky for us it was dry as a bone, however that meant that the sand was too. We weren’t prepared for sand, and while Ed managed to wobble through quite successfully, I was left paddling my way through with the bike swinging from side to side uncontrollably. 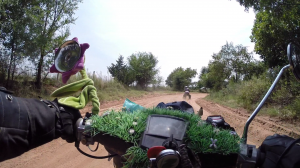 This is my usual technique when it comes to riding on sand, as my bike has a distinct lack of power equal to my distinct lack of skill. I have to say though that I once rode a Honda CRF250 successfully all the way round a deep sandy track, although I’d dropped it about 20 times before that (I couldn’t touch the floor). Power and position on the bike is key, and as we don’t have any power and can’t really sit any further back, we just muddle on through and do what we can.

After a particularly deep sandy corner, we were spat back out on to long straight roads that followed endless fields of farmland. We were just about to get bored of the monotonous terrain when hills appeared in the distance, and suddenly we were navigating corners and curves on dirt and gravel with the flat farmland a distant memory behind us. 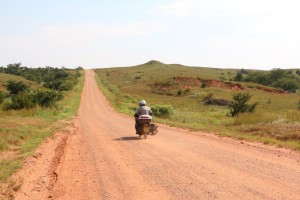 It was so good to have a change of scenery, and it arrived just in time. That’s what I love about the trail, you never have long enough to get bored of the terrain and scenery. Because it changes so often, you never take it for granted. This must be the case even more so on a faster bike. Some people complete the TAT in as little as 3 weeks, which must result in a whirlwind of changing scenery and terrain which could keep even the most ADHD of us engaged and occupied.

We eventually arrived in the town of Buffalo around 6.30pm, and after a tasty and welcomed dinner we went in search of a cheap motel room. We really can’t afford motel rooms, but when you’re hot, sweaty and dusty the budget suddenly goes out of the window. We spotted some other bikes that had whizzed past us earlier in the day, and thinking that that must indicate a cheap motel room we stopped to try our luck. It was there that we met Sandy, the lady rider of the three that I had been particularly impressed with as she flew past us on the dirt with her bike twitching away. 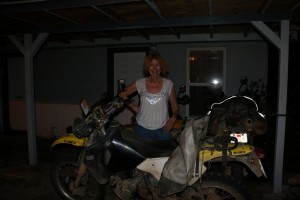 She held it well and I soon discovered that this was due to many years of riding in New Zealand. It was so great to meet her, and both Ed and I agreed that she was one of the coolest women we’d ever met. I wish more women were like that; one of the boys and a brilliant rider. She was doing the trail with her two friends Steve and Murray, who after a power nap came out to meet us. It was quite funny as they’d initially thought that we were a couple of kids riding our bikes for a joke, so they were rather taken aback when they discovered that we were actually quite serious (well we’re not but you know what I mean) and that we’d already ridden them from Alaska and across Canada in the winter. We really enjoyed chatting to them, and hoped that we’d catch up with them again at some point. They didn’t think that we’d even make it to Buffalo that night so we were already exceeding their expectations! 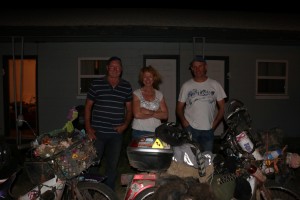 After a good hour of talking and putting the world to rights, they headed off to bed as they were due for an early start. We were also ready for bed, despite not planning on getting up early, and happily slumped on our bed that Ed had managed to wangle for $40; gotta love that English charm.