As we couldn’t leave town until 12pm due to roadworks, Ed spent most of the morning in bed while I went and hung out in a nearby cafe. 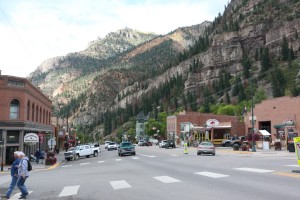 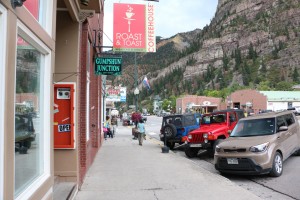 I really liked Ouray and everyone was so happy and friendly, and I spent most of the morning chatting to people. One guy called Dan came in to say hello as he’d spotted my bike outside, and very kindly gave me $20 for some fuel! It was so kind and thoughtful of him. 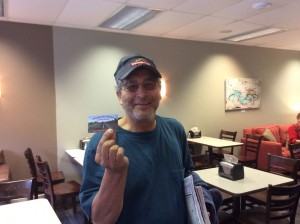 Just as he left another guy called West came over who had recognised the bike from videos online, and stopped for a good natter. Ed eventually surfaced and came to meet him, and before he left he too gave us $20 towards our travel fund. Once again it was so kind and thoughtful of him, and is always massively appreciated and unexpected. 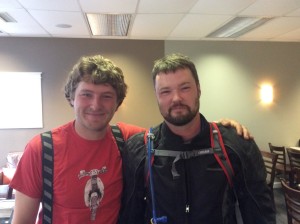 We’d really enjoyed the last bit of the off-road trail to Ouray, it really was spectacular with all the red rock and colours from the minerals and turning leaves, but due to the problem with my brakes we’d ridden it with little daylight and wanted to go back and get some photos and footage. 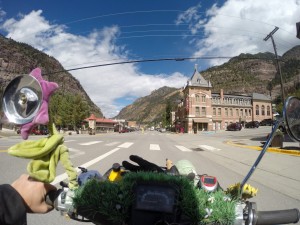 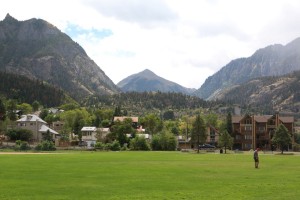 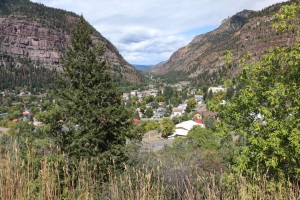 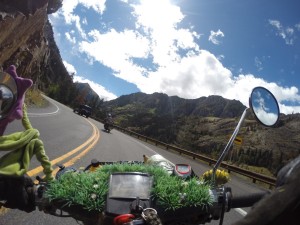 The weather had been pretty good all morning, and even as we left Ouray, but as we reached the start of the trail it suddenly turned, with the skies becoming overcast and the feeling that it was going to rain any minute. Thankfully a lovely guy called Mike pulled up on his Honda NX, and started chatting to us as he’d been following my ride report on ADV. 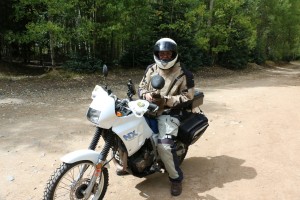 He’d seen that the weather was going to be better the following day, and suggested that we ride up over Corkscrew Pass and drop down to the town of Silverton for the day and night. It sounded like a plan to us, and with Mike following shortly behind us we retraced our steps back up the pass, which got steeper and steeper until our poor little bikes lost all their power and we started rolling backwards! To deal with this I decided to drop my bike, much to the amusement of a couple in a 4×4, and Ed (a.k.a my hero) kindly came to the rescue and helped me push it up the really steep bit (when I say helped, he pushed it while I watched). 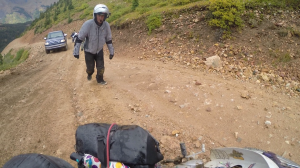 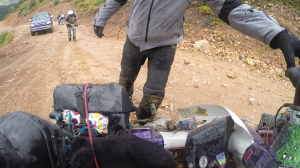 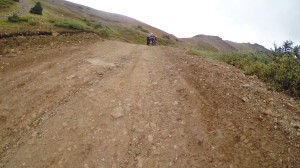 He was spent after that though and decided to re-jet his bike, while I chatted to Mike who had caught up with us. It started to get quite cold and was raining intermittently, so we slowly zigzagged our way to the top with Mike following behind to make sure we made it. 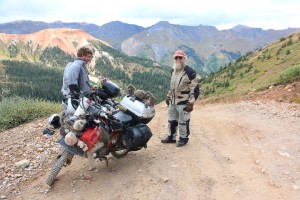 Thankfully we did, and we said thank you and farewell to Mike before making our way down to Silverton. While we were chatting Mike had mentioned about a recent environmental disaster that had happened in August, and as we made our way down the pass we could see the remnants of it. A small crew had been doing some excavation work on a defunct gold mine to insert a pipe as part of a cleanup effort, but one of the men removed too much material and spotted a trickle of water. It became evident that the giant concrete plug that closed the mine was about to give way, and sure enough a wall of orange water around 20 feet high exploded from the open mine’s mouth, spilling three million US gallons of mine waste water and tailings, including arsenic, cadmium, lead, aluminium and copper in to Cement creek and eventually the Animas River. So next time you have a bad day at work, spare a thought for the guy that was doing the digging. 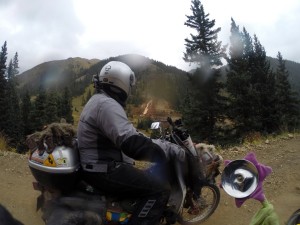 We rolled in to town just before the rain started, and went and sheltered in a cafe for a few hours. I didn’t mind as I love hanging out in cafes, and Ed didn’t mind as he hates rain. Camping was most definitely out of the question as the rain continued to lash down, and we thankfully found a hostel that did us a private room for $39, where we had a Breaking Bad marathon and ate some dried food; living the dream.