I first heard about the White Rim Trail on Facebook. Three Kiwi’s who we’d met on the TAT had done it and posted a few photos, and we rather fancied having a go. It looked incredible, and up for exploring the spectacular scenery of Canyonlands National Park we thought what better way than a 100 mile off-road trail, looping around and below the Island in the Sky Mesa top. With hindsight we should have set off earlier or started the following morning, but after securing two overnight permits at the Visitor Centre in town late afternoon, which were actually quite hard to get at the time, we rode out of Moab shortly after 4pm. 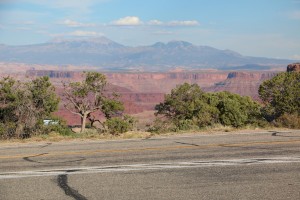 We didn’t realise that it was a 30 mile ride to the Canyonlands Visitor Centre where we needed to collect our permits, and by the time we’d done that it was after 5pm when we finally started in the direction of the trail. 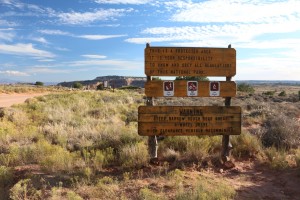 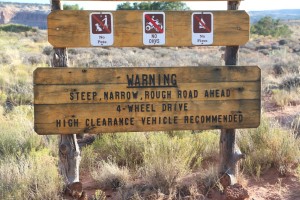 The scenery was a teaser as we rode towards the visitor centre, so I knew we were in for a treat, and as soon as we made our way down the Shafer trail I was in awe of my surroundings. 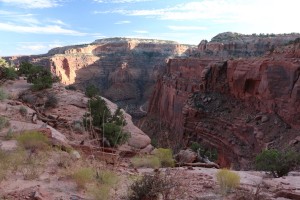 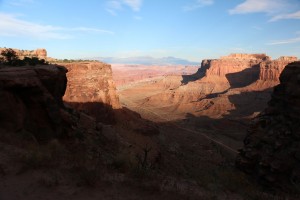 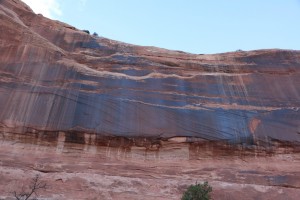 Fairly steep switchbacks took us down to the rim, and every turn provided a different view, each as beautiful as the last. 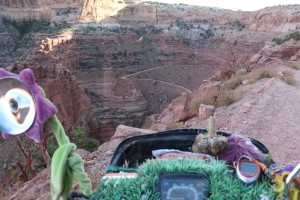 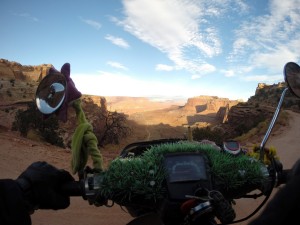 I tried not to stop too much as I was aware that we could run out of light, but it was while I was taking a photo that I met a fellow rider from Georgia. 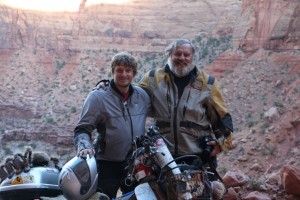 Mike had been following our journey for quite some time, and had ridden all the way from Alaska. He’d also completed the TAT a few years back, with a trailer on his bike no less. It was a pleasure to meet him and we stopped and chatted for a while, and also met another guy called Brett on his way down. 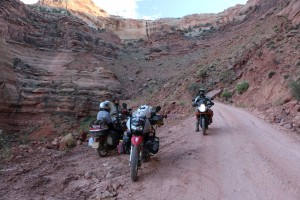 Both of them were turning off on to Potash Road, so we soon parted ways and continued on the White Rim. The scenery was incredible but it was a shame that the light was dropping, as I imagined it would be far more impressive in the daytime with some sunshine. 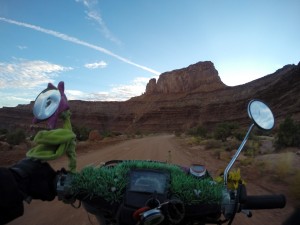 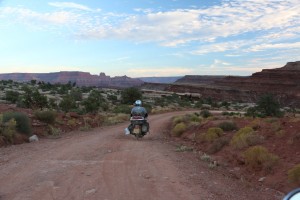 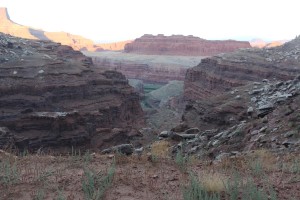 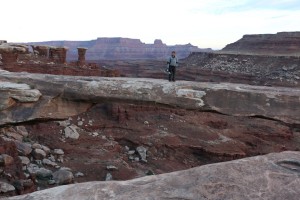 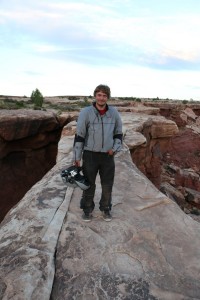 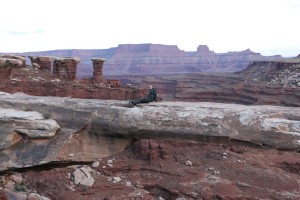 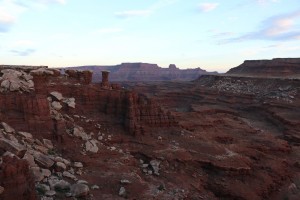 We did our best to ride as fast as we could to our designated campground, but we still ended up riding in the dark. It was quite surreal and it felt like we were on another planet, mainly because we didn’t have any lights. 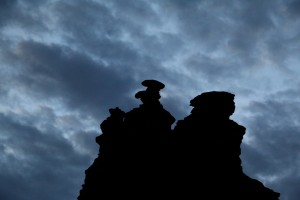 My headlight was illuminating my front mud guard as the bracket was broken, and Ed’s headlight was now broken due to an earlier crash in some sand. He tried to get it going but after smelling something burning he decided it was probably safer to ride without it. My vision isn’t 20/20 and in the dark everything looked quite pixelated, but I soon discovered that the light bits were packed sand and the dark bits were deeper sand, so I managed to pick the best route despite not actually being able to see properly.

We eventually made it to what we thought was our designated camp ground, but being quite dark and with everywhere looking the same we had to ride really slowly to see where the track started. It was then that someone started shining a ridiculously bright light at us, repeatedly shining it away and then back on to us. We couldn’t continue riding as it was screwing with our night vision, and after about the 6th time of them doing it Ed had enough and shouted ‘F*ck off!!’ rather loudly. Needless to say that it suddenly went dark. It took a few moments for our eyes to adjust before we could start moving again, and we carefully made our way up towards where we’d seen the light. It was then that we discovered a group of about 10 children and two adults. Being aware that we’d just told a group of children to f*ck off, we put on our best British accents and politely asked them if it was camping area D. The children didn’t know but the adults kindly told us that it wasn’t, and directed us further up the trail. We’re not proud of telling a group of children to f*ck off, but I have to admit that they were annoying.

We soon found what we thought was campsite D, but waited for someone to come out of the outhouse to ask them what way to go. It was then that we discovered that it was three guys that had been in the room next to us at the hostel. One of them even gave me his headtorch so I could navigate my way up to the camping area, and promptly said ‘I wish I’d put some pants on now’ as he was stood there in his underpants. It made me laugh and I promised I wouldn’t look, even though I already had.

We’d just put the tent up with our useless flashlights when the moon began rising, filling the desert with a brilliant light. It was the day after the ‘blood moon’ and it was absolutely spectacular. It was so big and bright and exerted such an incredible energy, that I found myself sat alone outside the tent just staring at it. The area was unbelievably quiet, with not even the sound of an insect to break the silence, and I just sat there staring at the moon and great expanse around me, unable to tear myself away from such a perfect magical moment. In fear of sounding like a hippy the area and the moon had the most powerful effect on me that night, and I can safely say that I’ve never felt anything quite like it before. It eventually started clouding over and the time came to go to bed, and as I laid in my sleeping bag I only had one thought in my head… ‘I love the desert’.