We had a big day ahead of us to get to our friend Mike’s house in Connecticut in a day, 200 miles to be precise. And although we had the best intentions to leave early, I got distracted with making my bike lighter by throwing out some stuff. I’d been carrying around quite a substantial first aid kit for nearly a year, and with the help of Ed and his constant answer, ‘you don’t need that, you just need a t-shirt and some duck tape’ we whittled my first aid kit down to a few plasters and a bandage. I was rather upset that I had to throw away my space blanket though, but Ed pointed out that we’re carrying a few hundred pounds worth of down sleeping bags with us. I have to admit, he had a point. Although it delayed us it was a job well done, as it meant that I could stop wearing my backpack and move it in to my top box. This not only meant that I could sit up straight easier, but it also meant I got a lot more ventilation round my back, and in this heat I wanted all the ventilation I could get. 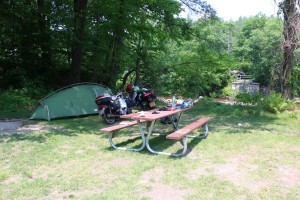 We didn’t leave the campsite until 2.30pm, but we were covering pretty good ground. The scenery was much of the same, although the trees thinned out a bit and there were a few more evergreens here and there. We stopped for lunch at a deli, and as we were sat in the garden eating it I felt like we were in a pub garden in the South Downs, near my house in England. It’s weird when you get moments like that, as you can really convince yourself that you’re somewhere else. 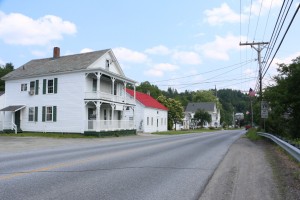 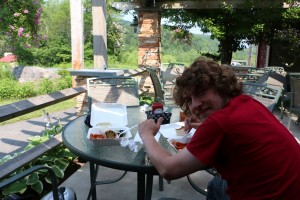 We passed through more beautifully maintained towns, with deli’s, markets, and small boutique shops, and through more gorgeous countryside with every shade of green that you can imagine. 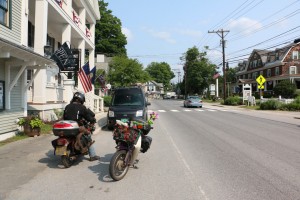 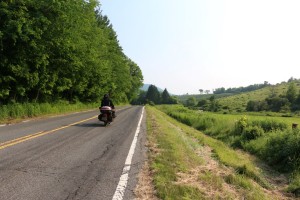 There was a particular stretch of road that we thoroughly enjoyed, and it was the kind of road that was made for motorcycles. It was a fairly narrow tree lined road, with curve after curve all perfectly spaced out. The bike was asking to be ridden down it, and as it was slightly downhill we cruised down it effortlessly, enjoying every bend to the full; as much as you can on a C90.

We soon left the backroads behind us and got on to the Taconic State Parkway, partly because it had been recommended to us, and partly because we were going to start running out of light and we still had a lot of miles to do. 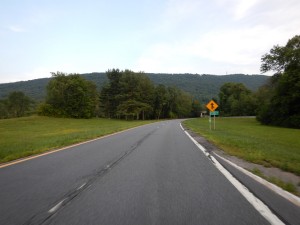 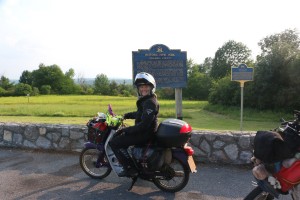 It wasn’t what I thought it was going to be at all. I thought it was going to be 2 lanes but it was 4. I thought it would be quiet but it was busy after the first bit. I thought everyone would be travelling at the 55mph speed limit but they weren’t. It was big, busy and fast, at least for us on our little bikes. I do have to say though that there were some good views, however there was nowhere to pull over to take photos of them. The big plus point of taking this road however was that we could cover a lot of miles in a short space of time, averaging 40mph instead of 25-30mph. 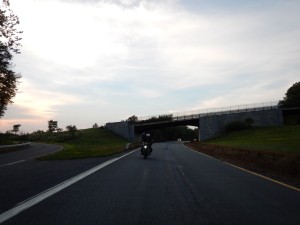 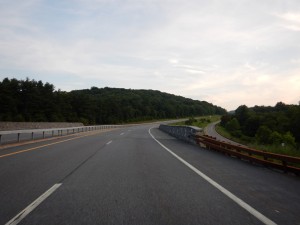 We’d barely been in the state of New York before we were entering Connecticut, and it amazed me how many states you could pass through in such a small amount of time; we weren’t exactly rushing. The light started to fall as we continued on our way to Stamford, which was a shame as I couldn’t nose in at all the houses we were passing. There was mansion, after mansion, after mansion, and each one had huge grounds and equally big driveways. There certainly wasn’t a lack of money in the area that’s for sure.

We eventually arrived at Mike’s house around 10pm, and it was only when we stopped that we realised just how hot it was. It was just like being on holiday, where you can wear shorts and t-shirts in the evening without freezing your bits off; lovely stuff. 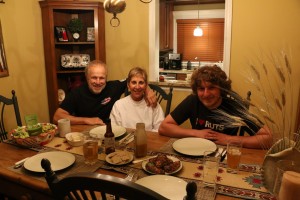 It was great to see Mike again. We’d met him at the very start of our trip up in Anchorage, Alaska, where he’d started off the random acts of kindness on our trip by kindly buying us dinner. It’s wonderful all the people you meet on your travels, and it’s great to catch up with people again, especially when so much has happened in between seeing each other. We also got to meet his wonderful wife Donna, and spent many interesting hours while we stayed with them, chatting about all sorts of things and thoroughly enjoying their company. 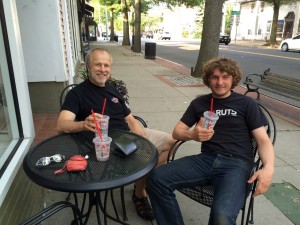 2 thoughts on “To Connecticut”