It was weird leaving Canada, after over 8 months in the country it felt strange going somewhere else. We were both looking forward to a change though as Canada had become so familiar to us, we were looking forward to a change of scenery and something new. The people had been absolutely wonderful though, and we both hoped that the friendliness would continue in to the states, over that imaginary line they call the border. 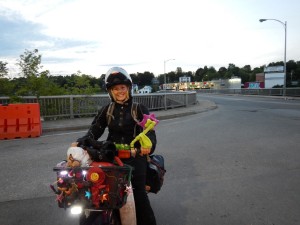 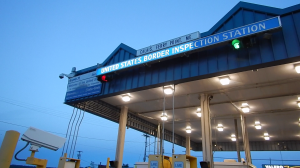 We crossed the border at Saint Stephen in to Calais, and it was beyond easy. It was a really small crossing with only a few border guards, and the one that we got was a bit of a joker. He didn’t search the bikes, didn’t care about funds, and gave us the full 6 months without even asking for it. Before we knew it our visas were stamped and we were off on our way in the US of A. 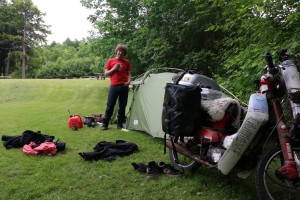 After a night camping in a rest stop we headed in to town to change our money, then stopped off at Tim Hortons for Wifi and a hot drink. It was there that we discovered that Americans are just as friendly as Canadians, when two couples came over to have a chat to us. One couple lived in Calais and the other couple lived on the west coast, and both the ladies were sisters. Joan gave us her details for a place to stay when we got to Portland, and after they’d all gone and got in their car, Coleen came back and gave us $100! As always we couldn’t believe the kind generosity and thoughtfulness, and couldn’t thank her enough. She said that with all our cuddly toys and things on the bikes it looked like we’d run away from home, so she wanted us to get a nice hotel sometime. 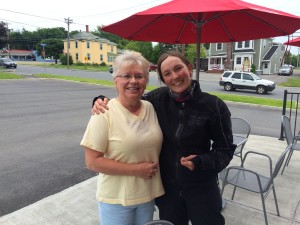 That sometime came sooner than we thought, as our ride to Bangor went from dry, warm and pleasant to wet, chilly and horrible. I could see why it was so green with all the rain we were getting, and the thought of camping disappeared from our minds like the rain disappeared down the drains. 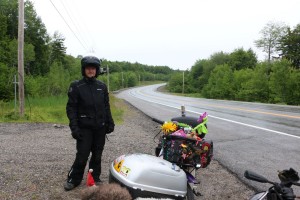 After a warm up and monster feed in an Indian restaurant, we wobbled out and went in search of wifi to find a hotel, but couldn’t find any and ended up on an accidental tour of the city. It had some lovely wooden properties, and despite the rain I rather enjoyed riding around and nosing in at everyone’s houses. Thankfully we found some wifi and subsequently a hotel, and soon found ourselves tucked up in bed watching Breaking Bad. Thanks Coleen!

The bonus of the hotel was free breakfast, which also means free lunch if you’re sneaky and make up a take-away. I however made the mistake of storing a boiled egg bagel in my helmet, which I completely forgot about when i flipped it over to rest on my jacket. Needless to say that there was egg everywhere, and Ed was left extremely entertained while I was left picking egg out of the vents. 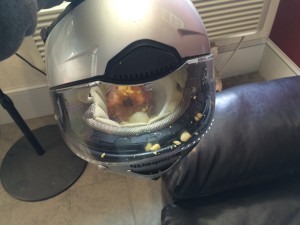 We couldn’t hit the road until we fixed my bike, as the cam chain was slapping around due to the rubber bung on the tensioner perishing. 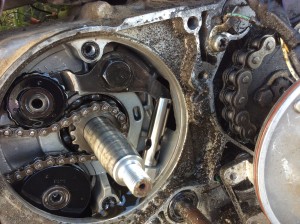 Thankfully we’d located one with the help of Larry in Moncton, and all we had to do was fit it. This was made harder by blindingly hot sun, the flywheel not wanting to come off for love nor money, and the fact that quite a lot of metal had been worn down and we had to build it up with weld. Well I say we, I mean Ed. I like to do as much as I can when it comes to my bike, but having only done a brief bit of welding I decided to leave this job up to him, while I sat in the shade protecting my blindingly white skin from burning. 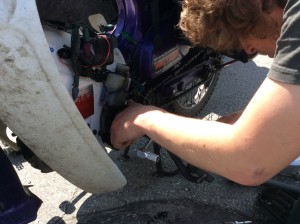 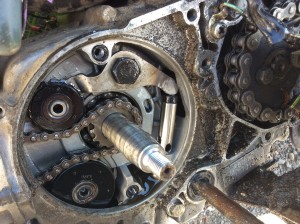 I have to say he did a grand job, as always, and we were soon on our way enjoying the breeze. While we were far too hot stood in all our bike gear, we were the perfect temperature when we were moving. It was around 25C and I was just right with my jacket slightly open the the vents undone.

We hadn’t got far from Bangor when Ed’s bike decided it wasn’t happy, and started smoking quite badly on and off, alternating between the exhaust and the breather pipe. The piston rings were definitely on their way out, which were now becoming a symptom of an undiagnosable ongoing problem. He’s been desperately trying to work out what’s wrong with his bike, but after changing over basically every part, including the engine, he’s at a loss. He’s starting to wonder if it’s a fault with the wiring loom, mainly because that’s all that’s left. His bike is slower than mine, uses twice as much fuel, and eats piston rings; answers on a postcard.

Fortunately Ed had a spare set of rings, so we decided to ride on and find a campsite where he could do the work. The scenery was pretty much the same for the whole journey, very green with limited views and a pleasant tree lined road. We needed to get some vice grips as Ed had lost his, so we stopped off at a Walmart to get some and got some food to cook on the fire. We didn’t have to ride much further before we came across a really lovely private campground, and used the left over money from Coleen to get a site and a bag of wood to cook our dinner. They gave us the most beautiful site at the end by the water, and we set about putting the tent up and got the fire going. 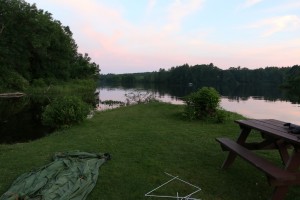 It was so good being outside in the evening without freezing your bits off, and we both had a tasty slab of salmon each cooked over the fire with some salad. I don’t know why but food always tastes better when it’s cooked over an open fire, and it’s made all the more better when your skilled boyfriend crafts a particularly good handle and rack out of wood that subsequently catches fire. Good work Mr March. 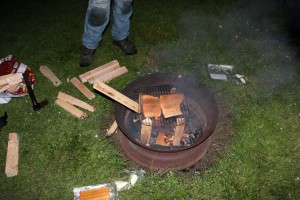 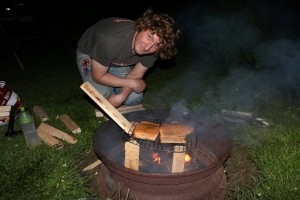