Sooo we’re still in Anchorage! Fairly predictable considering our usual pace for getting stuff done. Every day for the past week we’ve been saying “tomorrow, we’re leaving tomorrow” but alas, nearly two weeks later and we’re still here. It was a joke before we got here that we would never leave Alaska, now it’s become we’ll never leave Anchorage! We actually started packing the bikes up today though and only have a couple of things left to do so dare I say it? We’re leaving tomorrow! Probably. 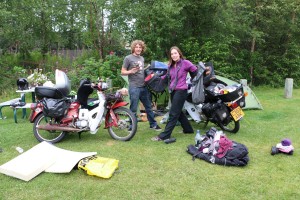 Where to put everything?!

The past week has mainly been buying bits for us and the bikes, finding things we didn’t even know we needed and talking ourselves out of buying them, and getting the bikes all ready and kitted up for hitting the road. We’ve been really lucky as the awesome guys at MotoQuest tours have given us use of their workshop for the past week or so which has been a brilliant help and massively appreciated. Throw in their great company, brilliant knowledge and ice cold beer and you have the perfect place to get ready for an adventure! Thank you MotoQuest!! 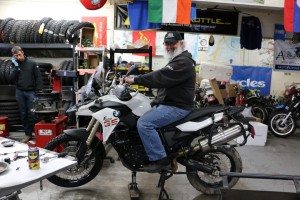 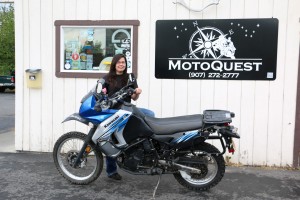 Brilliant Chrissy from MotoQuest, who would like to point out this is not her bike!

We’ve learnt that there’s a gap of about 250 miles between fuel stations on the way up to Prudhoe so we need to carry enough extra fuel to get us there. Our 3.7 litre tanks will get us about 100 miles give or take so we’ll need to carry about an extra 10 litres each with a contingency. Plus that and all our other stuff and we started to become a bit concerned about where we were going to put everything, Ed even considered buying a trailer! Hopefully everywhere will have a home and we won’t be too overloaded. Ed was happy to point out that however heavy our bikes are fully loaded we’ll still be less than half of the weight of an unloaded BMW 1200GS 😉 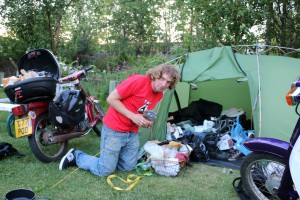 We appear to have accumulated quite a lot of stuff! Like a home away from home ay mum ;)

We also need to carry enough water and food, which brings me to tell you about my first experience of freeze dried food this week. Let’s just say it wasn’t a culinary delight. How you can have that many ingredients in something and still not have it taste of anything is beyond me, it’s actually quite an achievement. As I was reluctantly eating the flavourless slop I found myself thinking that the packet of oxygen absorber that you had to remove from the pouch probably had more flavour. It also had hardly any nutritional value although I thought I could bump it up by grating a multi-vitamin over it, a bit like parmesan. I decided to try another brand before completely discarding the idea. This time it had flavour but unfortunately it wasn’t from any of the ingredients, it was from the new kettle. I basically had kettle flavoured pasta in a kettle flavoured sauce. Yum. If anyone has any ideas or tips for eating good healthy food on the road that a) doesn’t weigh a tonne and b) doesn’t cost a fortune , I’m all ears! 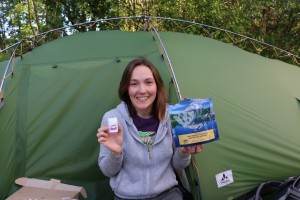 During one of our little jollies out I was happily riding along when suddenly I developed an uncontrollable wobble. I rolled over to the side of the road and discovered I had a flat rear tyre. There wasn’t anywhere nearby to fix it so we decided to limp/wobble to a garage of some sort. As Ed had experience of riding with a flat tyre he said he’d ride mine and I could ride his which was apparently fully functioning, until I got hold of it. I got on little ninety and it was what can only be described as riding a pogo stick on jelly. I pulled up alongside him at the lights and asked “Do you seriously enjoy riding this heap of sh*t?!” to which he replied “Yeah!” I said it was banging and wobbling then he looked down and saw that it had a flat rear tyre too! At that point I was concerned that perhaps I had eaten too many pancakes smothered in bacon and maple syrup (my new favourite thing) to flatten two rear tyres but Ed assured me that I didn’t weigh anywhere near as much as a standard load in Asia; A Vietnamese family and a donkey. We both banged and wobbled down the road until we saw a bicycle shop and pulled over in hope that they’d have some tubes to get us home. We whipped the tyres off and couldn’t find any punctures but we’d both managed to rip out the valves – that’d be the banging! 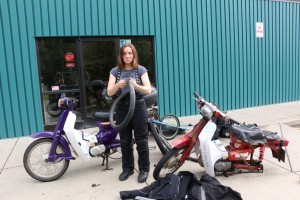 The guy in the bicycle shop was really helpful and called round all the motorbike shops for us looking for a 17” tube but no-one had any. Bicycle tubes it was then! After much confusion over how the hell they measure their tubes (we still haven’t worked it out) we managed to find two that fitted, kind of, they were bicycle ones after all. They were also made in the 90’s so we knew they wouldn’t get us up the Dalton Highway but at least we could get back to the camp site. 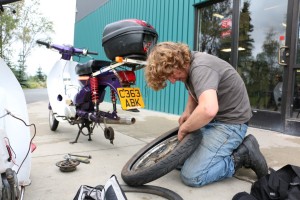 I’m surprised he can even see! 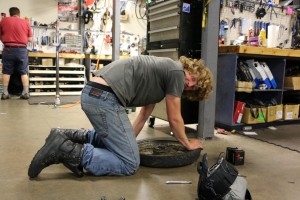 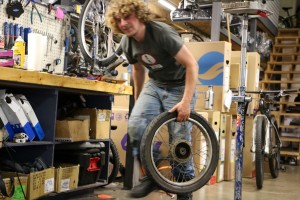 So the following day Ed got, you guessed it, another flat. This time we weren’t too far from MotoQuest so we limped back and swapped it for our only spare. We then filled Ed’s rear tube with slime, something we’d already purchased days before and meant to do before we both trashed our tubes. I’d also purchased a screen protector for my camera then managed to scratch the screen before I fitted it. You’ll see a theme here… 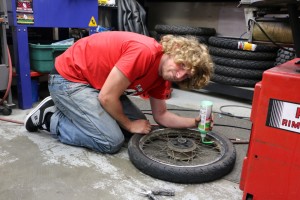 So we then had Ed with a good tube, me with a bicycle tube and no spare. We were worried we wouldn’t be able to find any and would have to wait for an Ebay delivery but luckily Anchorage Yamaha came up trumps, two heavy duty 17” inner tubes for $30, winner! 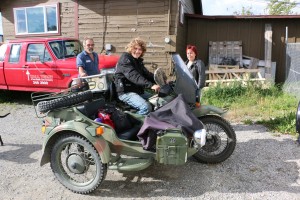 Ed with Mickey and Muriel, who looks suspiciously like Cathy Burke in this photo!

Ed needed to get his rack welded on so the guys at MotoQuest pointed us in the direction of Mickey, a self titled ‘Uralogist’. He fixes, maintains and does just about anything you could possibly do to and with a Ural. He was a top bloke and did the welding for free. While Mickey and Ed were doing that I was chatting to his partner Muriel who was really lovely. She’d moved over from France about 20 years ago and loved Alaska. Mickey called her his ‘Little Rebel’ which was quite fitting with her customised Ural, skull gear shifts and scary face mask! I discovered she’d been to the Kristal Rally in Norway – a crazy rally in winter – I thought she’s definitely one hardy lass! I liked her a lot. 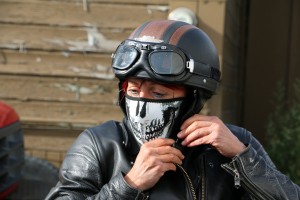 Muriel getting her outfit on! 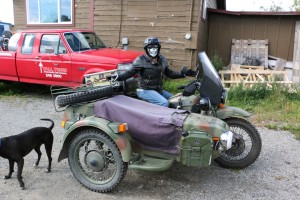 Ed mentioned that he needed a few parts for the 90’s so Mickey pointed us in the direction of his mate Dave who apparently had all sorts of parts and spares. We went there the following day and discovered that yes, he had A LOT of parts. Apparently, or so we heard, he had loads of bikes years ago then the the local law enforcement said that he was a bike dealer and needed to be paying the appropriate taxes etc so Dave, not up for being taken for a ride basically said “No I’m not, I’m a parts dealer” and proceeded to strip down every one of his motorcycles… legend. 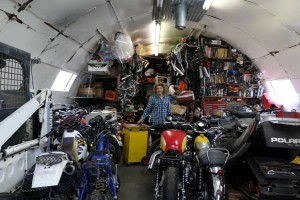 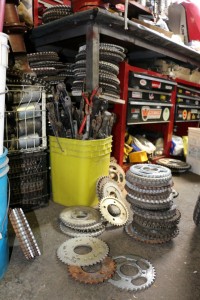 He was really cool and sorted us out with 2 new rear sprockets and also made me a front rack, all in exchange for one of Ed’s DVD’s. I did say we wouldn’t be offended if he’d rather have the money but he said he wasn’t looking to make anything, it was just a hobby and they were parts he’d accumulated along the way! 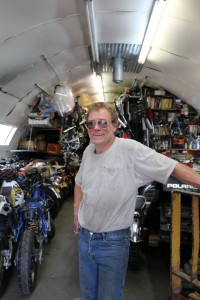 Dave in his ‘shed’

So the next update we should hopefully be on the road… miracles do ‘appen! 🙂