The time had finally come to leave. We’d said ‘tomorrow’ so many times that it suddenly went past being a joke and we thought “we really do need to go!” We woke up a bit earlier than usual but not by much. Sifting through the bomb site of our tent we finished packing the bikes up which I have to admit turned out to be quite a mission! We were properly on the limit of what we could carry and strategic packing was required to fit it all in. I had a few things left over which I bundled in to my backpack hoping to find a home for them along the way. The next problem was that we hadn’t actually bought any of the food or extra fuel yet – where the hell were we going to put it?! 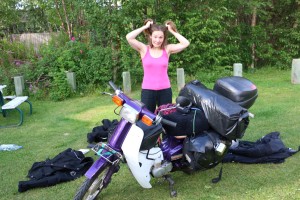 Me tearing my hair out trying to fit everything on the bike! 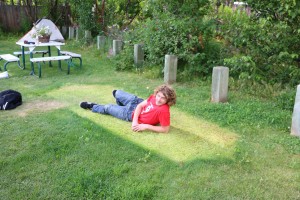 I did the finances and Ed cut my seat down so I could fill up with fuel without it being a pain in the arse every time. He also found a mirror for each of us so we can see trucks coming up behind us on the Dalton Highway, quite important seeing as we’re small and they’re massive! It was after 6.30pm and Chief and Chrissy came to say goodbye although I’m sure they were probably thinking we’d still be there in the morning! Sometime after they left, Ed realised he’d left his phone in their office, we managed to get hold of Chrissy who said she’d come and open up for us but she’d be a while so we went off to get food. When it comes to food shopping, what takes a normal person 10 minutes takes me 30. Lets just say I have trouble choosing things and it’s unfortunately getting worse with age! By the time I’d decided what to get it was starting to get dark. Despite being well behind schedule (a combination of us taking ages to pack, me taking ages to choose food and us having to go back to get Ed’s phone) we’d committed to leaving and were going to, no matter what!

Even just outside the city there are ‘Bear Aware’ posters everywhere, you have to be careful where you leave food and scented things so you don’t lure them in to your camp. I must admit it’s weird having serious things like bears and moose to think about, I mean all we have in England is the odd angry woodlouse! We found a campsite just out of town, it was $25 but it was getting late and dark so we decided to stop. I also have a standard C90 headlight which is about as useful as a chocolate teapot and most of that was being blocked by my fuel can which was being illuminated like Rudolf’s nose. And It didn’t matter that we didn’t even make it out of the city limits, we’d still left House of Harley camping and that was enough of an achievement for us! 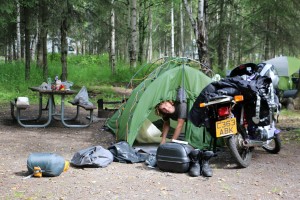 Nearly out of the city!

We woke in the morning to discover that the brilliant camping set ups we’d seen in the dark weren’t all that they first appeared. Several camps were occupied by somewhat unsavoury characters however they were pleasant enough to us and perhaps if we knew more about their backgrounds and circumstances we would understand more why they were how they were and why they lived how they lived. There’s always a story.

By the time we’d got up, ready, eaten and fuelled up it was already 3pm. Yes I know, we’re lazy and slow but why rush when you’ve got all the time in the world? It was funny when Chief at MotoQuest said shortly before we left, “It’s lucky you guys have got 2 years!” We filled up our jerry cans with extra fuel and Ed warned me that it would feel a bit weird with an extra 2 gallons of fuel on the front, he wasn’t wrong! But I soon got used to it and it became the norm. Now we had the extra fuel we could ride until we ran out which was good. This did however lead us to discover that I get an extra 24 miles or so to the tank, much to Ed’s dismay. His bike does however go up hills much quicker than mine so that seems a fair trade however further investigations are required!

It was great to finally be on the road, it had been good and helpful camping at House of Harley but we’d been there so long that it had all become too familiar, same faces and places, we felt like part of the furniture. It’s nice to have that now and again but we were ready to move on, to not know what’s round the next corner or over the next mountain, it was liberating, the real adventure had finally begun! 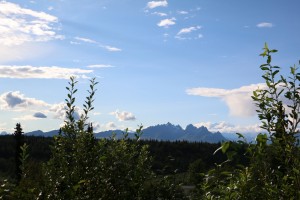 We entered Denali National Park and the scenery was gorgeous. A big bright blue sky with jagged mountains in the distance and tall trees lining the roads. Just my kinda place. We decided it was time to find a campsite so we stopped at one just off the road but it was for RV’s only so we decided to keep going. We were chatting to each other over the intercom and Ed was saying it would be nice to ease ourselves in gently to wild camping. About 20 minutes later we spotted a campsite sign for Byers Lake and turned up the track, camp spots were $10 but then we noticed a sign for public cabins. There was a barrier across the track but of course room for a 90! We rode down this really cool track for a few minutes and found cabin number 2, unfortunately occupied. We decided to continue down the track where we found cabin number 3. It didn’t look like anyone was around but the door was closed, I went up the steps and with fingers crossed went to open the door which to my delight was unlocked. The cabin was completely empty and ours for the taking, result! “Well I think this is easing ourselves in gently don’t you think!?” We couldn’t believe our luck, it was perfect. A wooden cabin by the lake with a balcony, a wood burner, a picnic table and a fire pit. The only thing missing was the ice cold beer that we’d forgotten to buy in the last town, bugger! 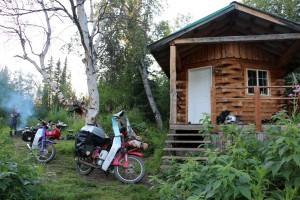 Our cabin for the night :) 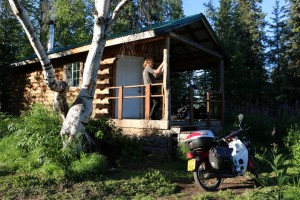 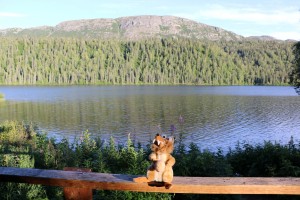 Scrat and the view from our Veranda 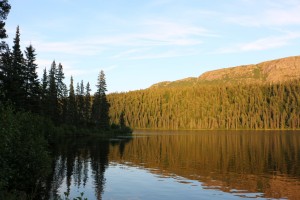 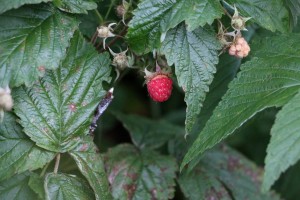 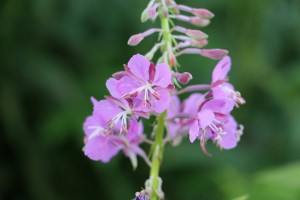 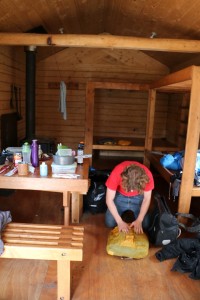 Ed praying to the Exped gods

Entertainment was then provided by Ed going for a dip in the cold lake, there is video footage but here are some photos for now 🙂 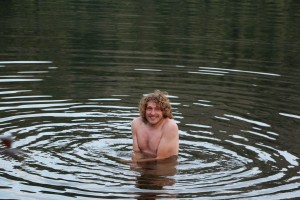 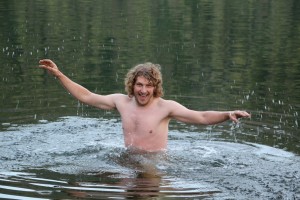 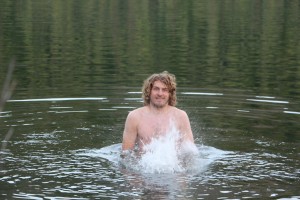 Did you just fart?!

Despite what seemed like the perfect place to stay, I didn’t sleep well at all, the second night in a row. I soon discovered it was because I was writing my diary right before going to bed, it was too stimulating, my brain was wired and I couldn’t stop thinking excitedly about all sorts of trip related stuff. It’s nice to be excited about things but not while you’re trying to get to sleep. It was raining early in the morning but it soon cleared and the sun was lovely and warm. Despite the bad night’s sleep it was a good start to the day waking up to view of the lake and mountain, lovely stuff. We made our way towards Fairbanks which was a nice ride until it got cold and wet, a sudden shock to the system. Luckily it was short lived and it cleared up the other side of the mountain where the sun was nice and toasty.

We got to just outside of Fairbanks, picked up some beer (not forgetting that again) and went in search of a campsite. We asked at the fire station and the lady pointed us in the direction of a closed down campsite. We couldn’t find it so stopped at a small pub where we were greeted by a German chap. He gave us some better directions then said they’d just picked some mushrooms and were cooking them up if we’d like some. I wasn’t sure if they were normal or magic mushrooms and looking at him they could have easily been either. We made our way to the campsite with the intention of returning to find out however after setting up the tent (which unfortunately suffered a broken pole upon erection, weyhey!) and settling down with a beer we decided we didn’t have the energy to venture out. 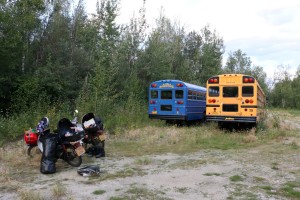 Our ‘campsite’ for the night 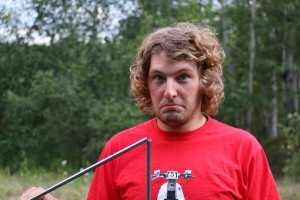 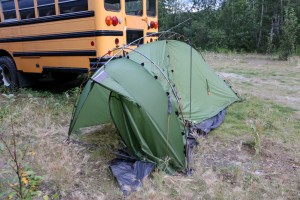 Our awesome tent looking not so awesome

While I was having my food Ed started to create his concoction with various tins and packets of things. He heated the first bit up then took it off the stove to start adding all the other packets. He continued cooking it but then wondered why his food wasn’t getting any hotter. We then noticed he had it over an empty can instead of the stove. I think he was a bit tired! 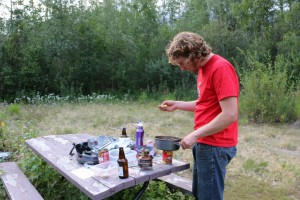 Cooking on an empty can, bless!

He’d been lacking enthusiasm for the latter of the afternoon ride. I think a combination of having a big lunch and also not having any music to listen to after breaking the screen on his phone after trying to fix it. I got fed up of having to look at him slumped over his bike looking decidedly bored, he was emitting a bad energy and messing with my chi so I happily took the lead while smiling at the beautiful views and generally feeling happy and content.

I mean, what is there not to be happy about? I’m not sat at a desk at work staring out of the window daydreaming about doing the trip, I’m actually lucky enough to be doing it, and that’s plenty to smile about. It’s funny when you spend so long talking about doing something, when you’re finally actually doing it it’s like “F*ck, I’m actually in Alaska, I’m actually doing this!” And they’re really cool those moments of realisation, because they’re moments where absolutely nothing is taken for granted, not even the air you breathe. 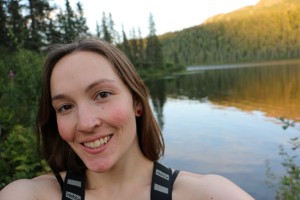