Fields, OR to Lakeview, OR

(Apologies that this next bit is a tad lengthy, but I needed to write and post it to get it off my chest. Feel free to scroll down to where we leave the hell hole that is Fields Station)

We got up in the morning, packed up most of our stuff then made our way to the restaurant for breakfast. The girl serving and cooking was rude from the start and it appeared that her face would crack if she dared smile at us. We sat down and looked at the menu, and then she asked if we were out of our room yet as they needed to clean it. They hadn’t told us a check out time, and at 10.20am we were a bit surprised that we had to be out already. We both went and grabbed our stuff and dragged it in to the restaurant area, ordered our food and then waited, and waited, and waited.

She seemed to be too busy on her phone to hurry up and cook our food, and she soon came over to us. ‘The cleaner says there’s oil on the floor, you need to pay for it to be cleaned’. I was in shock, I couldn’t believe it. ‘No there isn’t’ I said. ‘I noticed a damp patch yesterday and saw that it was worse this morning, I meant to tell you but I forgot as we were hurried out this morning. We haven’t spilt anything, especially not oil’. ‘Well she’s pretty clued up, she knows what oil is’. ‘Well she obviously doesn’t!’ ‘Well you need to pay for it’. ‘I’m not having that’ I said, starting to feel shaken by what was happening. Ed then said that he wanted to speak to the manager and go and look at the wet patch, so he went out and met the male part of the couple who owned it, and after inspecting it they both agreed that it was water, not oil or coffee, and that it was all fine.

Thinking that was that, he came back, and about an hour after ordering we finally got our food. I have to say it was good and a decent portion, but I had a bitter taste in my mouth from how we had been treated. We finished up and went to leave, and the girl said she needed to speak to me before we left. Not to Ed, but to me. I went over and told Ed not to leave, and then she proceeded to say that it was coffee on the floor and that I needed to pay for it. I couldn’t believe it. The female owner then appeared and completely went off on one at me. She basically told me to shut up as I tried to defend myself, and she claimed that I’d had an attitude from the start. I thought she was joking. ‘What attitude?! I’ve been nothing but pleasant from the start’. She said that I’d made a comment about it being expensive, and Ed quickly stepped in, pointing out that it was him that had said that, and that he stood by it; it was a statement of fact. 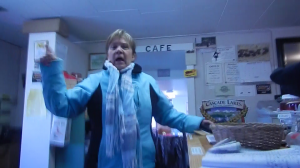 She then proceeded to show us photos that the cleaner had taken, of a yellow looking stain. She even threatened to call the Sheriff, which we encouraged, as we hadn’t done anything wrong. I also thought that we could do with another sensible male around here, they’re the only ones that seem to be listening. After comments back and forth, Ed said ‘Can we just go and look at the actual floor, instead of these photos?’. She wouldn’t have it, but he eventually managed to get her to go to the room with us to look at it. She was convinced it was coffee, and despite standing right next to the wet patch, she wouldn’t stop thrusting her phone under our noses saying ‘Look, it’s yellow!’ ‘But it’s not yellow!’ Ed exclaimed, pointing at the actual patch in front of us. He then went and grabbed some toilet roll to prove it. He blotted the patch, and showed her that there was no colour. She seemed to completely ignore him, and kept pointing at her phone and the yellow stain in the photos. Ed was getting frustrated by her blatant stupidity and ignorance, and tried to explain that the screen on a phone and the light in a room can change the colour of something in a photo. He then tried once again to bring her attention to the actual patch, and that he’d proved that it wasn’t coffee or oil. She then got the cooks boyfriend in to check it, and he confirmed that it wasn’t oil or coffee, it was just water. She kept saying ‘Just admit that you’ve spilt something!’ which just frustrated me further as we hadn’t, and I couldn’t do any more than keep repeating that we hadn’t spilt anything. We were going round in circles.

We all left the room and she went back in to the shop while we packed our things on to our bikes. I felt so angry and frustrated, how dare they treat us like this, we’re paying customers. There is a way to go about dealing with things with customers and this definitely wasn’t it. She soon came back out and seemed to change her tune. She said ‘You can just pay for what you owe for breakfast as you’ve already paid for the room, and then you can go’. We said okay but then continued to explain that we hadn’t spilt anything, and that we weren’t happy with the way we’d been treated. She apologised, unconvincingly. I apologised too but I don’t know what for, the only thing I was sorry about was staying there. I think apologising even when you haven’t done anything wrong is a British thing. People bump in to you in the street and you end up apologising to them.

We really felt like we needed to reiterate just how frustrated and annoyed we were, and she said something along the lines of ‘Well there’s no point flogging a dead horse’. I understood what she meant, but I also really wanted to get across how rude and unacceptable her and her member or staff’s behaviour had been. I didn’t feel like she really realised, or that her apology was genuine, she was trying to save face. She then put her arms out for a hug, which we both reluctantly but stupidly accepted. It was awkward and fake. I’m not a mean person, so I went with it, but with hindsight I really wished I’d said ‘No thanks’ and got on my bike and ridden off. The annoying thing was we wanted some fuel, although we just had enough to get where we were going, so we couldn’t say what we really wanted to which was along the lines of ‘F*ck off you mental bitch!’

And that Ladies and Gentlemen, is why we wish it had been the motel that had burnt down after all. Sorry if that sounds harsh, but it’s just how we felt at the time. After nearly a year and a half on the road, this for me was the worst experience on the trip so far, and that includes getting our bikes impounded by the Quebec police; at least that was relatively entertaining.

It was gone 1pm by the time everything had been sorted and we were free to go. We’d hoped to have been gone by 11am, but with breakfast taking an hour and having to deal with three apparently stupid, irrational and hormonal women, we hadn’t stood a chance. 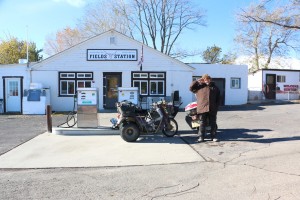 Not having many hours of daylight left and with freezing cold temperatures and snow on the ground, we decided to skip the next section of trail through Oregon, Nevada and California, and take an easier and quicker route direct to Lakeview, Oregon. 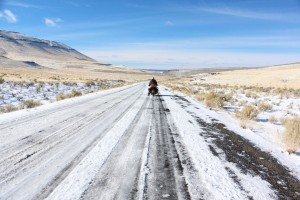 We got back on to the paved road and then turned off on to a wet muddy trail. It was pretty slippery, and Ed managed to crash. It showed how much better he is at crashing and multitasking than I am, as he gave me a running commentary over the intercom while crashing, making sure I wasn’t in the way. All I can manage is ‘Shit shit shit shit shit shit shit!!!’ 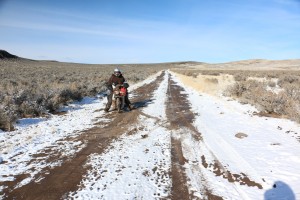 Reeling with anger and frustration, running the mornings events over and over in my head, I suddenly started feeling funny, with hot flashes and an agonising pain in my abdomen. I’d got an upset stomach and had to relieve myself behind a rock, cursing the cook as I used up the last of our toilet paper. ‘I bet she poisoned me on purpose!’ I said. Ed pointed out it was probably where she kept touching her phone, scratching her arse and then touching our food. Thanks for that. 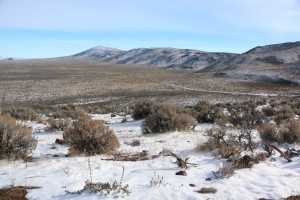 Feeling a little better but not 100%, we eventually got on to a paved road. It was the 140 ‘Warner Highway’ and ran all the way to Lakeview, and eventually on to Medford. It was completely empty apart from a few passing vehicles, which was quite convenient as it was incredibly icy and slippery in places.

My fingers and toes hurt from the cold, but I looked out over the wide open scenery and sweeping views to help take my mind off it. The miles seemed endless staying on the same road, so to break it up we stopped off in Adel, where the man in Fields had said he’d got a cheap room. We were only stopping for a hot chocolate, despite the temptation of a cheap warm bed. The man serving was really sweet, a far cry from the last lot, and he kindly gave us a free refill along with a warming smile.

The scenery started to change from there. After riding through a valley, more trees and forest appeared, with the road becoming winding. It was dark by the time we arrived in Lakeview, but we managed to find a decent hotel where a lovely German guy was the manager. I was so pleased to be in the warm, and after a massive feast down at the local Mexican restaurant, we snuggled down in to what could possibly be the most comfortable bed we’ve ever slept in.