Lakeview, OR to Silver Lake, OR

Partly due to laziness, but predominantly due to Ed having the best nights sleep he’d had in ages, we decided to enjoy another night in the massive comfortable bed. After a day of lazing, laundry, TV watching, eating and general procrastinating, we were feeling much more ready for another day on the trail. 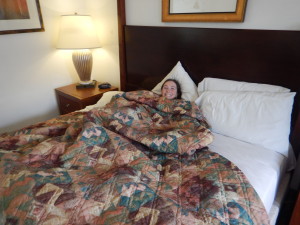 With a warmer day came motivation, and as the snow and ice melted in the late morning sun, we loaded the bikes, grabbed a subway for breakfast/lunch, then hit the road around 11am. Ed’s rear tyre was looking on the low side again, but with a quick visit to the Les Schwab tyre centre opposite the motel, we were pumped up and on our way. 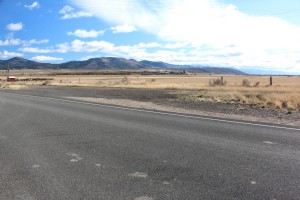 A paved road took us out of town with pleasant scenery in every direction, consisting of soft pale grasslands and snow dusted mountains, against a backdrop of blue sky with fluffy grey tinged clouds. 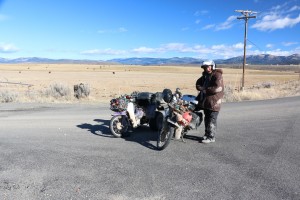 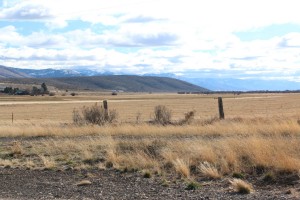 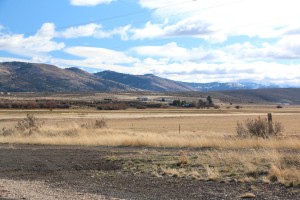 We turned off on to long straight graded gravel roads before entering the forest, where the trail turned to dirt and packed down pine needles. 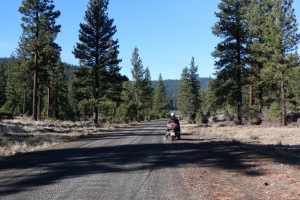 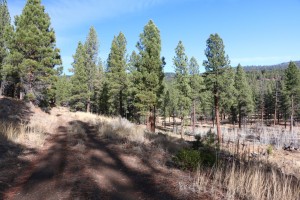 We wound our way up and down through the forest, with the evergreens getting increasingly taller, and despite having Sat Nav we still managed to take a few wrong turns; good luck navigating Oregon without one! 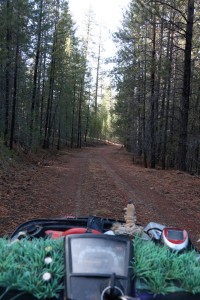 I caught the odd glimpse of a beautiful view as we climbed up a little higher, but we soon descended down again and got back down to the forest floor, where sunlight streamed in between the trees. 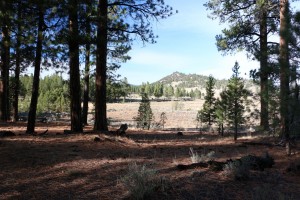 We eventually turned off on to a graded gravel road and started climbing our way up again, this time higher, and snow suddenly appeared as we turned a corner. 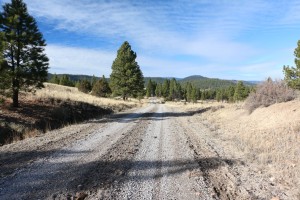 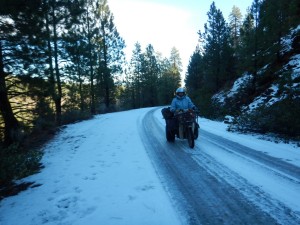 It was really slippery where it had melted and then frozen again, and as the ice was hidden under a layer of snow it continually caught us out. I just kept the power on and slid sideways, while Ed had a much harder time keeping upright and in a straight line. 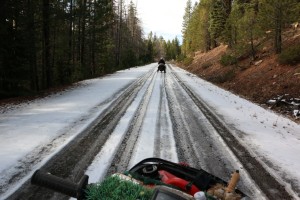 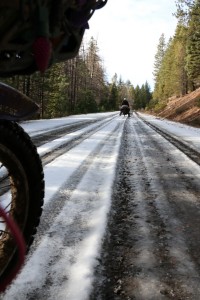 Apart from the snow, slush and ice, the only other obstacle was a small fallen tree to ride around. 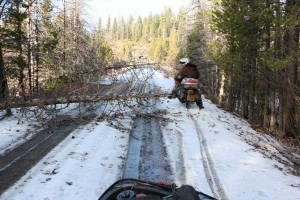 The snow was on and off though, and just when you thought it had gone for good, another stretch of it would appear and slow us down. After riding continually for quite some time we stopped on a snowy stretch for a toilet and food break, and a ranger kindly stopped to see if we were OK. I never know if people are questioning our sanity when they ask if we’re OK, but either way he was happy when we said yes and left us to it.

As we slowly made our way down to lower elevation we thankfully left the snow behind us, but much to our surprise the trail turned to sand and meandered through the trees. We’d been warned about sand in Nevada but never in Oregon, and I imagined in the summer months it could be a real bitch to navigate. Thankfully for us though it was hard and compacted with the cold and moisture, and neither of us had any trouble riding on it. 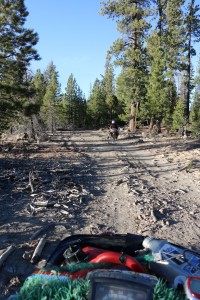 We were soon spat out of the forest on to a red graded dirt road surrounded by fields, grassland and areas of forest, and as time was getting on we decided to take a shortcut via paved roads to cut out a few miles. 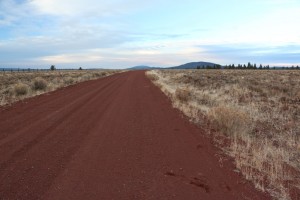 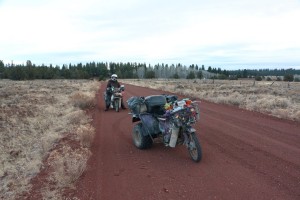 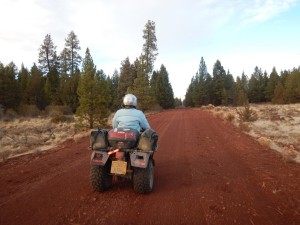 We’ve always tried to stick to the original TAT route as much as we can, but sometimes you can’t or time and circumstances don’t allow it. On this occasion we figured that the terrain wouldn’t be any different to what we’d already ridden, and keen to get somewhere in the daylight we decided it was the best thing to do.

With our option of a shortcut it was paved road all the way to Silver Lake, but we still didn’t get there in daylight as Ed got a puncture; typical. 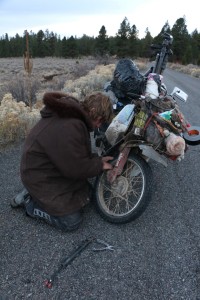 Thankfully he managed to repair it and an hour or so later we arrived in Silver Lake, just in time to get the last motel room for a bargain $40. All in all a fairly easy non-eventful day, but another day closer to the finish line no less.