Crescent, OR to Klamath Falls, OR 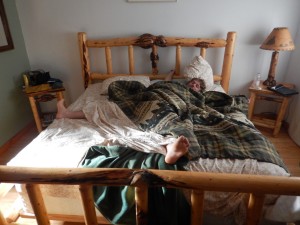 Similar to me tempting fate with my words and thoughts, booking any accommodation is a sure fire way to guaranteeing something going wrong. There was only one place to stay on the next section of the route, so planning ahead I dropped them an email and booked a room for the night. After breakfast we went to load up the bikes, but looking at his chain that had been making some strange noises of late, Ed noticed that his rear sprocket was, well, fucked. (Yes that’s the technical term). 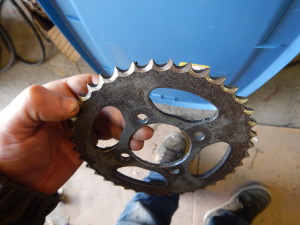 We were suddenly left with a problem, and quickly had to work out a solution. There was no way we could continue, as riding off in to the middle of nowhere knowing that the bike could break at any moment would be stupid and reckless, something that we’re not, even if other people think otherwise. 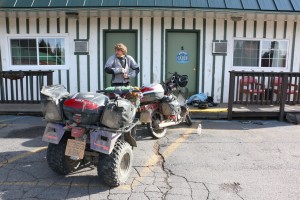 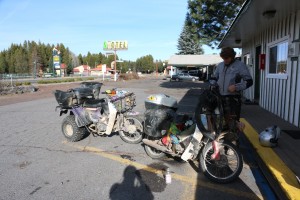 Once continuing was quickly discounted, and we’d called around all the bike shops within 150 mile radius, we put our thinking caps on. Our first option was to order a sprocket to be delivered to Crescent, but as it was a Friday we’d have to wait at least 4-5 days for it to arrive, which would be a lot of time and money. The second option was to ride 90 miles south on a proper road down to Ed’s friend’s house in Klamath Falls, where we could stay for free, wait for the sprocket, and enjoy a home away from home. Needless to say it wasn’t hard to decide which option to take. So after the fourth day waiting in Crescent, only joking, of course we rode to Ed’s friend’s house 😉

On paper riding down a basically straight paved road for 90 miles should have been easy, but being on a trike that only wants to go right made it much more difficult than it should have been. I rode for quite a long time until my arms were exhausted, and Ed kindly took over for me. Although I don’t much like riding Ed’s bike, it was a damn sight easier than the trike, and I revelled in being able to go effortlessly in a straight line, something of a novelty for me.

As we got nearer to Klamath Falls we ended up with a small tail back behind us, so we pulled over in to a lay by to let the cars past. It was then that something rather strange happened. As I went to pull away on Ed’s bike, the contents of his rear wheel was spat out on to the ground, something that really shouldn’t happen. By luck, chance or fate, it had happened while stationary, and thankfully not while moving at 40+mph. We bent down to investigate it and discovered that his axle thread was stripped, which had caused the nut to come off, axle to move, and the brake cushions to fall out of place. It really shouldn’t have happened, but one thing was for sure that the bike wasn’t going anywhere.

Not averse to putting our motorcycles in the back of pick-ups, we ended waving down a lift to get to me and the bike to Ken’s. A really lovely lady pulled over and we loaded the bike up, before setting off with Ed following behind on the trike. I unfortunately can’t remember her name and didn’t get a photo, but she was really sweet and rather excited about helping out a stranded traveller. Ed’s friend Ken came out to lift the bike off, and after waving farewell to my friendly helper, Ed finally arrived on the trike.

It had been over two years since Ed and Ken had seen each other, after first meeting on Ed’s Mongolia tour back in 2013. He was the cool guy in his 60’s, the one that Ed respected so much that he could have made him cry with his words. It was great to finally meet the legend in person, and he and his wonderful wife Marolyn made us feel instantly at home. We located and ordered the new sprocket for Ed’s bike, and then all there was to do was wait and enjoy their company and warm home and hospitality, safe in the knowledge that we’d definitely chosen the right option. 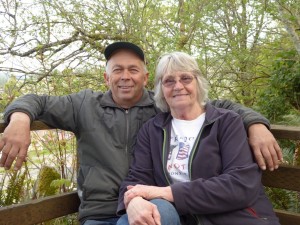