Silver Lake, OR to Crescent, OR

We woke to yet another bright day and sunny day, which did wonders for our motivation and enthusiasm. 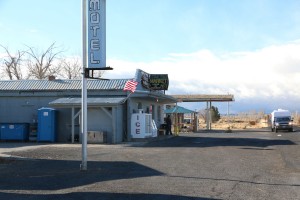 Clouds still hung in the sky, and as we took a paved road out of town a beautiful rainbow appeared over the road. I could have taken this as a good omen, but after over three months on the TAT I’d learnt to know better. 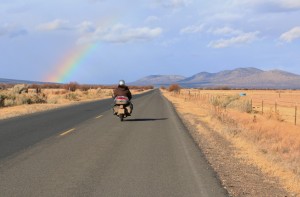 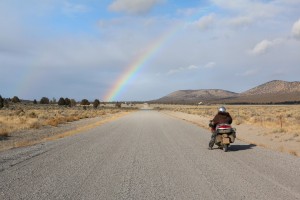 All was going well as we turned off on to a gravel road then on to a sandy trail. It was a little bumpy with the bastard bushes, but not too bad, at least not compared to the next section we had to tackle. 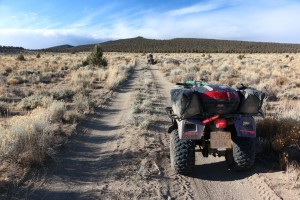 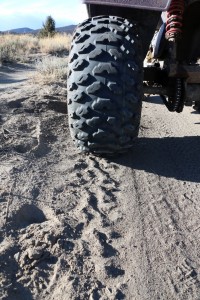 We got to an area completely full of rocks, which turned out to be a massive pain in the arse for me. It was really bumpy and hard to navigate, with no good route for me or the trike. It got worse and more condensed as I continued, so I bumped over them at a snails pace; a painstaking task to say the least. 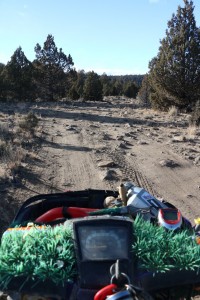 Part of me just wanted to open the throttle and blast right over them, even if it did throw me around like a rag doll, but I knew that it wouldn’t do me or the trike any good. And so I continued; crawl, bump, sway, stop, repeat. Ed on the other hand was just fine nipping in between them, and left me behind to swear at the rocks. 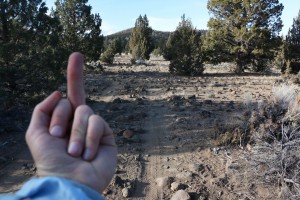 We finally left the lumpy hell hole behind, climbing up slightly on a sandy trail to give us beautiful views of the surrounding scenery. 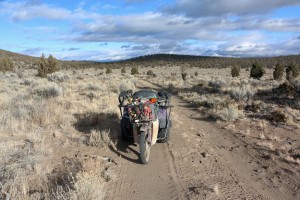 It then flattened out before we took a graded gravel road in to the forest, where we wound our way through on dirt and sand, keeping a keen eye on navigation as it was so easy to miss a turn. 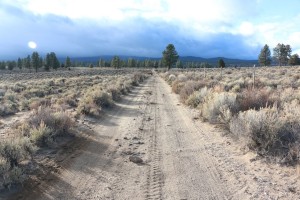 They’d cleared large areas of forest and had a bonfire on the go, and I thought that it was sod’s law that it was on the one day that I wasn’t cold and didn’t need warming up. 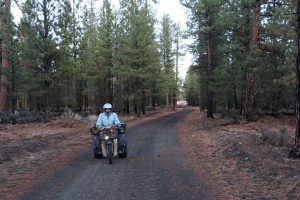 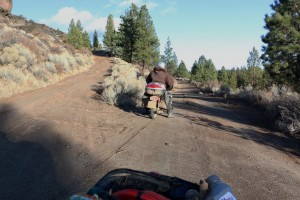 There were stretches of wide graded gravel and other sections of smaller trails, which took us deeper in to the forest. Huge trees towered above us, and as we stopped to have a toilet break I found some really cool brightly coloured moss. I love being in the forest, so really enjoyed this section. 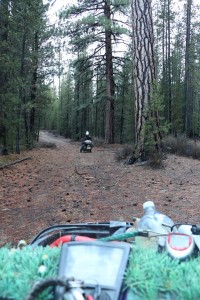 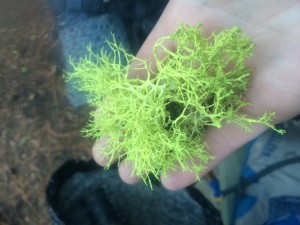 The trail continued to wind through the forest, but we soon came to a stop as a massive tree had come down and was blocking the route. We had a good look but there was no way around it, so Ed found a detour down a different trail which eventually joined up with Sam’s route again. 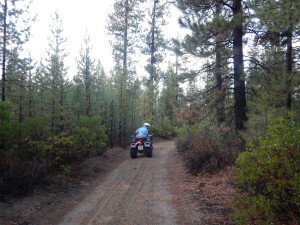 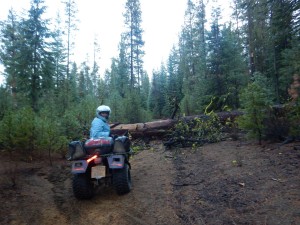 I’d obviously tempted fate by thinking after our detour that we’d actually managed to escape the snow for a day, as we climbed up to slightly higher elevation and the oh so familiar white stuff appeared. 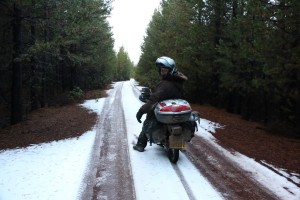 It was really slushy and slippery and I slid out a few times as the camber took my wheels with it, and poor Ed was really struggling to stay in a straight line.

The light started falling as we continued, but we eventually got down to lower elevation and the snow disappeared. I was hoping by this point that we didn’t have far to go to get to Crescent, but I was left disheartened when Ed checked the route and discovered that we still had about 30 miles to go. I thought that at least being at lower elevation and with the snow gone we could eat up the miles, but little did I know that Ed’s rear tube valve was seconds from being torn out. I think by this time Ed was sick of punctures and changing tubes, but with no other option than to replace it, he got on with the task in hand as quickly as he could. 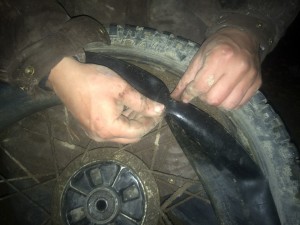 He had to remove the tube then fix the spare, before putting it in and finally getting on our way again. By this time it was pitch black and cold, and the trail from then on seemed to take forever. At one point my spirit was lifted as we got on to wider gravel road which I hoped would take us all the way to Crescent, but of course there was no such luck. Instead we turned off on to an increasingly narrow trail, which was extremely undulating and wound through the forest, with the trees hanging over us at times making it feel like we were in a tunnel. It would have been quite cool had it been daylight and I’d been able to see properly, but with my failing night vision and lack of glasses, I really struggled to navigate it at a decent speed.

Ed ended up having to ride to the right and slightly ahead of me so I could use his headlight, but I struggled to keep up and he had to keep dropping back so I could catch up, something that was impossible for me to do once his light was too far away.

After what seemed like forever we eventually popped out of the forest and arrived in Crescent, with a sigh of relief on my part. We quickly found a cheap motel with another massive comfortable bed, and after a feast in the restaurant over the road, we went back and slumped on the bed, looking and feeling scarily like one of the many stuffed animals they’d had on the shelves.