I could almost hear the cogs whirring as Ed suddenly had an idea. ‘We can make it in to a trike!’ As soon as he’d come up with the idea he was excited, and so was I, especially after thinking that the next miles for me would be in a plane going home. Ed loves a project, and is particularly handy when it comes to making things, and having pushed himself to the limit with his ‘new’ little Honda TL125, it couldn’t have come at a better time.

What he didn’t anticipate however, was just how challenging and time consuming the conversion would be. He initially thought that he could just bolt a swing arm on from one of the famous Honda ‘death trikes’, but unable to find one (despite scouring the whole of Moab and the internet) he soon realised that he was going to need to make a custom swing arm instead.

It was on one of our searches that we discovered a helpful man called Tucker. We’d seen a house with a yard literally full of junk, vehicles, and basically anything you could think of, and after trying our luck and knocking on the door, we were greeted by his son who directed us to the local dump. It turned out that his dad Tucker worked there, which explained why his yard was the way it was; anything that looked remotely useful was brought back and left to rot, or in this case, used by a random English guy.

Tucker initially made some calls and trips to help source us a trike, but after failing to find something suitable he agreed that Ed could pick and choose from the ensemble that was scattered across his yard. And that’s when the fun began… 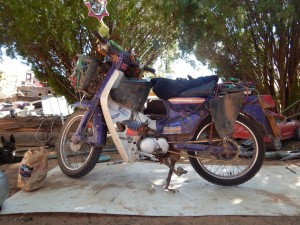 Despite it being far more involved and difficult than he’d ever imagined, Ed was determined not to give up. I always admire his ability to be able to make and do anything that he puts his mind to, and the trike was his most demanding project to date.

Armed with a yard full of vehicles and a particularly useless welder, three days to make something soon turned to seven, seeing Ed disappearing down the yard every day while I recovered at the house. It took a lot of hard work, engineering, and thinking outside the box to make it, not to mention a lot of other vehicles…

Front of the swing arm is from a Yamaha DT50. Axle, brakes and bearing block are off a 125cc Kazuma quad, which at some point had been converted into a motorised shopping trolley…don’t ask. They’re both joined by a piece of 2 inch steel box section. 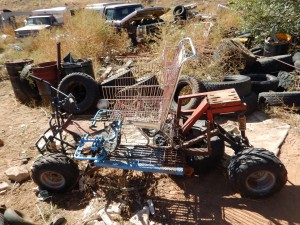 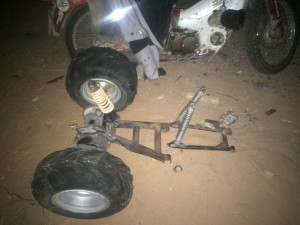 Wheels are off a Polaris 350cc quad bike. They had to have holes re-drilled using a tape measure and a Barry Manilow CD case as a straight edge. 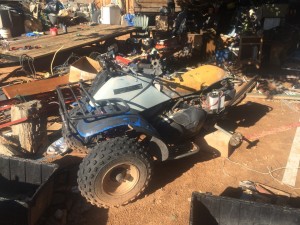 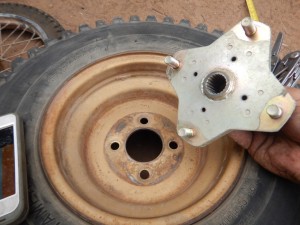 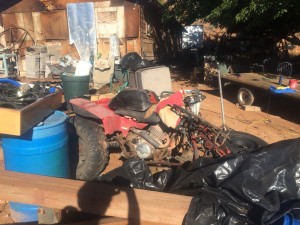 Mud guards are made from some plastic sheeting found in an old Ford Mustang. 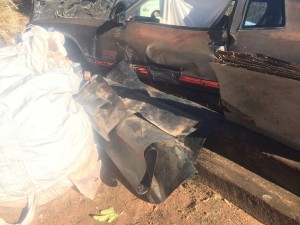 Chain guide is from a Kawasaki 250cc motocross bike. 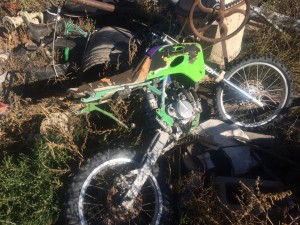 The ‘anti run your feet over’ bars (added on after I managed to run my own foot over after 30 seconds of riding) are made from some bits of old Wendy house we think, we couldn’t tell.

The dual brake conversion setup was from a Yamaha 350cc quad bike. 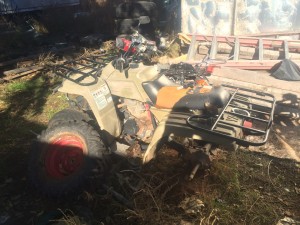 Exhaust is custom made by modifying a Chinese 150cc quad exhaust to avoid the brakes, footrests, kick start, swing arm, tyres and plastics… (he said he failed at avoiding the plastics 😉 ) 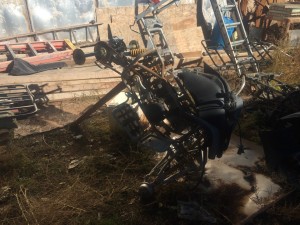 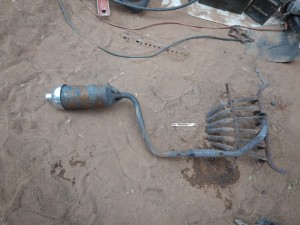 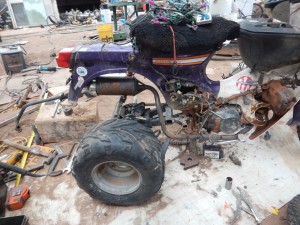 Plastics are off a Suzuki 300cc quad. 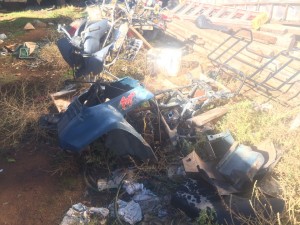 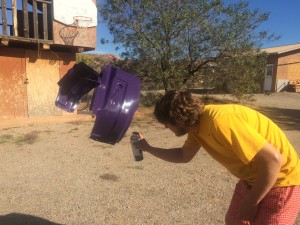 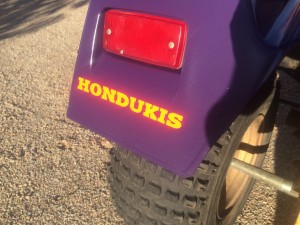 And there you have it, everything you need to make a Hondukis Yamakazufan 4000! 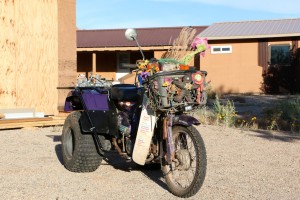 5 thoughts on “The Making of the Beast”